Something... Unfriendly is a gen Blake's 7 anthology with two issues.

It is digest-sized. The zine was also was printed in a full size version. The first time it was printed in two volumes, thanks to the thick rag paper they used, the reprint in one volume. It is unclear where the large digest size fits into the printing history. 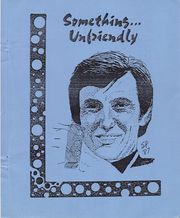 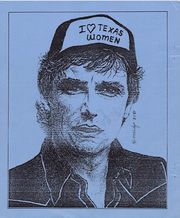 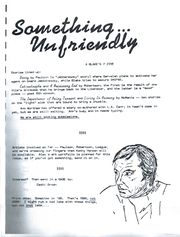 zine flyer that appeared in The Flotsam Chronicles. Click to read.

[The Wings That Fly Us Home]: Ingenious Un-Gaudas or Please make it didn't happen or All is not as it seems: Terminal and the entire 4th series are programmed false memories to send Blake after Avon for revenge for the attempted murder. [1]

[zine]: Only two issues of this zine (as far as I know), and they're in two different formats: #2 is full-size, and #1 is digest-size. But whereas Standard by Several, Dr. Bellfriar's Memorial Journal, and Power #2 (the other U.S. digest zines that I know of) are made from ordinary letter-size paper folded in half, Something... Unfriendly #1 appears to be made from legal-size paper, halved, so that it's an almost square shape. It's a fat zine, nearly 300 pp., and the paper is neatly cut in half and bound in the usual way with card covers and heavy-duty staples. I've never seen another zine in this format. I have no idea why it was done this way and not as a full-size zine, unless because the printing was significantly cheaper for legal-size sheets than it would have been for double that number of letter- size sheets.

Carol mentioned this zine on Lysator as one that's particularly rich in good Tarrant stories. My own special favorite is her "Rules, Honor, and Chivalry" in #2. PGP, all survive (including Blake), but Avon and Dayna are badly injured. Tarrant goes back to his job as First Champion of Teel, with skills that Soolin has taught him, and uses his earnings to pay for security and medical care. Servalan finds them, and complications ensue.

I'm also especially partial to Sheila Paulson's "Mind-Tender" in #2, a PGP in which an injured Avon is healed both physically and mentally by an appealing alien.

There's plenty of hc in these zines, but not much sex. In "The Face of the Stranger" in #1, Tarrant learns the hard way about betrayal through his doomed affair with an original female character. In "Blood Bond" in #2, Vila experiences (apparently unconsummated) love for another original female character. I wondered whether this story might be a sequel to someting in another zine, since it seems to start in the middle. [2] 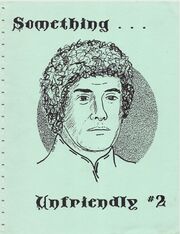 "The Good, the Bad, and the Unique" (A blatantly prejudicial, biased non-review of some recent zines.) Before going on, please read this disclaimer. I admit that this considers zine stories for only three things: if they are fair in characterizing Tarrant (The Good) if they greatly misunderstand, malign, or ignore Tarrant (The Bad), if they have some refreshing premise or twist (The Unique). I will not comment on quality of good writing and will ignore or pan stories that are better written than some of "The Good" ones. All ratings are based on my own personal impressions, tastes, and interpretations.

This zine is a bit of a mixed bag IMHO. It has a long Jabberwocky episode which will please fans of that series, one or two above average stories and the rest merely adequate. Most of them are action or moderately emotional without any real angst, Jabberwocky excepted. Gan does not appear, Blake and Cally have very little to do, and the lion's share goes to Avon and Tarrant.

The "Interview" is with Avon, who has reasons for wanting to give his version of events as the Federation finally falls apart. Archetypal Avon, rather pedestrian story.

The consistent Sheila Paulson is next with yet another enjoyable read. The 32-page "Mind Tender" is a PGP where a distressed Avon is rescued by a hairy alien, the Mind-tender of the title, and is subsequently reunited with some of his former colleagues. It's an emotional but not maudlin story where Avon has his barriers down so expect lots of hugs and other forms of fan wish fulfilment, yippee.

"Food for the Gods" is about Avon and an injured Tarrant in a cave. Not very original but okay.

The next few stories are all pretty short.

"That's what Friends are for" is a light weight shore leave tale.

"The Price of Friendship" is a sombre alternative version of what happened after Dorian's death.

"Flight to Destiny" is a two-pager about Avon and Raiker.

"Resurrection" contains a surprise on Xenon after Scorpio leaves for the last time.

Tarrant meets up with his sister in "The Message": rather melodramatic.

"Sure as Hell" shows there's life after death, in comedy anyway.

"Invictus" is a more substantial story, with a strong plot describing what happens when Avon is blinded and meets a really interesting machine intelligence.

"Weight of the World" is told by Jenna after Atlay. Blake is withdrawn, life ain't what it used to be, when Liberator gets a mysterious plea for help. An unusual conclusion for a Blake story.

"Time Distort" is a 24 page time travel story that has a host of predicable new characters for our heros to relate to. There was rather too much about the former and not enough about the latter for the story to gel.

In "Blood Bond" Avon goes down to an icy planet with a new part-mutoid crew member whom Vila has befriended. While there Avon has a moral dilemma to cope with. Quite good.

"Clone" is a 73-page episode in the Jabberwocky saga. At the start Tarrant's not himself, Blake's worried about imipak, and tensions mount; to say much more would take too long and give away half the plot. Suffice it to say that the charaters are as well drawn and the plot as skilfully plotted as ever. If you like alternative story lines the Jabberwocky series should please you. If not, note that this one takes up a lot of the zine so you may want to spend your money elsewhere.

"Distorted Images" is a staccato short in which Avon and Blake in turn give an account of the events around Gauda Prime. "Rules, Honor and Chivalry" is a long PGP Tarrant story. He gets the crew away from Gauda Prime but Dayna and Avon are badly injured. Soolin leaves for pastures new, and the rest settle on Teal where Tarrant earns money to cover the medical bills; old acquaintances show up in due course. I had trouble believing this one, not just - I hope - because I don't see Tarrant as noble but because the plot failed to convince me. [4]