You may be looking for Standard by Seven. 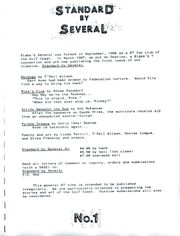 flyer that appeared in The Flotsam Chronicles. Click to read

Standard by Several is a gen digest-sized anthology published by Blake's Several Club. It has a newsletter sister zine called Notes from the Underground.

Standard by Several 1 contains 80 pages and was published in July 1987. 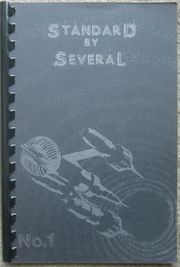 [Unidentified story]: A good story is found in (I think) the first Standard by Several, which answers this problem.

Avon is captured after Gauda Prime and forced to work on recreating StarOne. After a certain length of time, he escapes with Orac in a fast ship, and goes to Horizon. He is warmly received, then disappears for some time, and the Federation subsequently leaves Horizon. Avon found a source of monopasium closer to Fed Central and informed the Fed of it. He moves onto Horizon, and technowizard that he is, improves life for all. This is just background for the real story (yes, this one has PLOT). [1]

Standard by Several is an inexpensive digest-sized zine published by Blake's Several, a B7 fan club of the Gulf Course. The first issue contains eight stories, plus poetry and filks. The first story, Past Favors is an entertaining adventure in which Vila meets up with some unfriendly folks from his past. We get a glimpse into Vila's previous life, a sensitive view of his relationship with Avon, and some comic relief, too. There is also a twist of dramatic irony at the end. I've often wondered if the Federation of Star Trek is somehow related to the Federation of Blake's 7. The short story Ship of Revelations provides us with a tragic continuity between the two. Voice from the Future is a hilarious view of our heroes settled down in domestic tranquility which gets funnier and funner as it goes along. The names of Gan's grandchildren had me howling.... Revenge is a compelling but horrible post-GP tale of Avon, Vila, and Servalan. Not for those with weak stomaches or soft hearts. Mike's Fice is surely unique in B7 literature. It is a graphic-novel style adventure combining B7 with The Monkees. Davy gets seduced by Servalan, Mike considers pushing Michey out of a shuttle, Peters limiter malfunctions and he starts making sense!... Once you've reached the end, the final point, the two shows are not that different! Phlene Dreams is an odd little post-GP scenario with a very dry wit. The illo was sensibly put after the story so as not to give away the final surprise. Strife Beneath the Sod is a serious post-GP story which explores Blake's revel set-up on Gauda Prime. The interaction between Scorpio survivors and Blake's new followers provides the conflict in the story. The story is complete in itself, but the series is continued in issue #2. Finally, Altered Orbit s an intriguing 'what might have happened' story. The Liberator Limericks were hilarious. There was some very good serious poetry and filks; my favorite was No Regrets No Likely. There is some nice artwork by Denise Loague scattered throughout the zine. The cover by T'Prell is simple and striking. This fanzine offers a good balance of serious and humorous material at a reasonable price. [2] 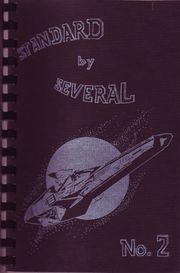 Standard by Several 2 was published in October 1988 and contains 110 pages.

"STANDARD BY SEVERAL #2 continues the quality of STANDARD BY SEVERAL #1, with a mixture of serious and funny material. IF AT FIRST YOU DON'T SUCCEED by Carol Mel Ambassador puts Jenna and Blake right where we' ve always wanted them- I can say no more. REBIRTH by Sarah Shillin is a post-GP novelette with an interesting balance between optimism and tragedy. I liked it a lot. Some of the humorous pieces relied heavily on in- jokes. BAR TAB by Dee Beetem and Sue Wells played off the fact that each member of the B7 crew, if casually described, could actually be a well-known person in another fandom (Space: 1999, Star Wars, Star Trek, etc.). It was fun guessing who each person was supposed to be, and the reference to Callahan's bar (the location of a wonderful series of SF short stories by Spider Robinson) won my heart. But if I wasn't conversant wltll other fandoms, I would merely have been puzzled- or annoyed, CARNELL KNOWLEDGE by Dee Beetem and Renae Ransdorf poses a similar problem; it parodies some of the well-known, more melodramatic post- Gauda Prime stories. (These are considerately listed at the end of the story.) Like BAR TAB, if you're in on the joke, it's pretty funny; if you're not, you'll feel left out. On the other hand, ZINE-ON by Dee Beeteem and Renae Ransdorf is accessible to anyone with any familiarity with fanzines- and it's hilarious. MAUDIE, TOO by Sondra Denney can be read and enjoyed with only a cursory knowledge of LITTLE SHOP OF HORRORS, and it is not only funny but also touching. There are two after- the-episode vignettes: "THE BEST THAT YOU CAN HOPE FOR... " by Melissa Honig (a clever and appropriate title; takes place after "GAMBIT") and PRESENT TENSION by Jamie Ritchey and Dee Beetem (post- "Voice from the Past") Nothing really happens in either; they are basically psychological. This is not my favorite kind of story. THE LEARNING CURVE by Judy Gore is a post-GP adventure with an unusual here, Orac! AD ASTRA by Maria Pitt is an interesting story about Blake, his followers and his family before the series begins. The exposition is a little shaky; it is not always clear who's who and the reader has to stop and work things out. AVALON by Adrian Morgan and Brendan O'Cullane is a chilling tale that fits right into the fourth season. The characterizations are excellent, and it's good to see some of the action from the point of view of Soolin, often a neglected character. It is not a nice story (I did warn you it was a fourth season series!) but it's a good one. KNIGHT OF THE IGUANA is a novelette which follows STRIFE BENEATH THE SOD from STANDARD BY SEVERAL # 1. There are filks about the show, and also filks about fandom; both are hilarious. My favorite serious poem was SNOWQUEEN by Renae Ransdorf, but WHY? by Alyns Lawchilde ran avery close second, especially since it's about another oft-neglected character, Gan. I found the illustrations (by Ruth Landry, Adrian Morgan, Pam Poggiani, and Renae Ransdorf) especially well- matched to the text in this issue. [3] 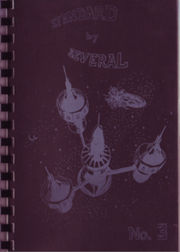 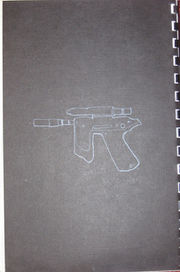 Standard by Several 3 was published in June 1990 and contains 170 pages. Story summaries are archived here.

There are two unusual crossovers in this issue: another Monkees story, and a very odd story in which Max and Deeta from Deathwatch try out the combat grounds and find themselves competing at auditions for a musical comedy, namely High Society (presumably because Steven Pacey was in a well-received stage production of same). It's also a sort-of Trek crossover: the directors running the auditions for the play are two guys named Len and Bill, who sound strangely familiar. :)

There's a short but nice Gan story, for you Gan fans.

"Not in Your Wildest Dreams" is an it-was-all-a-dream story even more extreme than Avon's 8.

There's only one romance in this issue, but it's a doozy: moon disc/sopron. In a way, I'm giving away too much by revealing that, but oh well. The plot: Cally's moon disc disappears. She and Vila eventually discover it in Avon's cabin, curled up with the Sopron. A very sweet story in its kinky little way. :) [4]

"The Good, the Bad, and the Unique" (A blatantly prejudicial, biased non-review of some recent zines.) Before going on, please read this disclaimer. I admit that this considers zine stories for only three things: if they are fair in characterizing Tarrant (The Good) if they greatly misunderstand, malign, or ignore Tarrant (The Bad), if they have some refreshing premise or twist (The Unique). I will not comment on quality of good writing and will ignore or pan stories that are better written than some of "The Good" ones. All ratings are based on my own personal impressions, tastes, and interpretations. 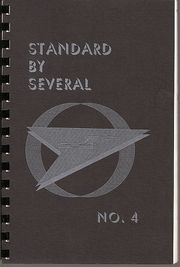 Standard by Several 4 was published in March 1993 and contains 148 pages.

The last issue of the zine contains the truly wonderful Dr. Seuss parody, "Shoot Feds and Dodge," also in Serrated Seven. I think of this as the "sex with Blake-- not!" issue, because of two stories. In "Duet for Cynics," Avon consoles Jenna (platonically) over her unrequited interest in Blake. "Freedom" pairs Blake romantically with an unusual created female character, but alas, nothing is ever consummated and the ending is tragic. "The Bonding" is a gen story exploring ideas that some of us might take in smuttier directions. :) [6]