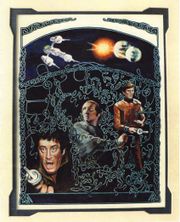 back cover by Leigh Mootooka

Was Planned to Be a Series

The editor mentions in the zine's editorial that there were more issues planned.

Wortham also mentions in the editorial in Southern Comfort #8.75 that more stories by J.R. "in the 'Saint of Circumstances' series" were to appear in future issues, but there were no other issues published.

Here is Serrated Seven at long last. It's not quite as hurt/comfort as I had intended when I first envisioned it, alas. But it does contain some great "get 'ems" and some all-around good adventure B7 stories. I had hoped that Leah and I would have time for a new Bizarro story for this issue, but it just wasn't meant to be. We are still hoping to start collecting some of our out-of-print material into new volumes with new edits, new stories (sequels), and probably updated art, as well.

I would like to do more issues, but that is dependent on you guys. I need contributions of art, poetry, filler, and stories. THe fines are finally thinking down (probably because I've done five new zines all at once for MediaWest this year.)

I thought the long-awaited Ashton Press hurt-comfort zine "Serrated Seven" was (with a handful of exceptions) mediocre-to-terrible. [1]

I most enjoyed Sheila Paulson's "blatantly sentimental" "Happy Families" probably because it reminded me of old issues of B7 Complex. The Longest Night" by Jane Mailander was a nice piece, too. However. I feel the most inventive by far was K.D. Swan's "Firebreak.- Wow. [2]

Serrated Seven is a "hurt/comfort" genzine from Ashton Press.

It starts off with an involving, angst-ridden Tarrant story, "In the Shadow of the Night" by Linnadel Cameron, in which everyone somehow survived Gauda Prime, and Blake and co. rescue the pilot from a grisly fate on a Federation penal world.

The "comfort" portion of this tale consists primarily of all the characters repeatedly hugging one another, an action severely outof-character for most of them, but wildly popular in wishful fan fiction.

"Happy Families" by Sheila Paulson is, by the author's own admission, an unmittigatedly sentimental post G-P story in which everyone (except poor Gan) turns up alive, to be reunited (eventually) with an autistic Avon who's been rescued and adopted bv a family of space traders.

In "Death Be Thine Enemy, Death Be My Friend," Beth Masterson fills in the five grim days of Avon's interrogation and torture before the events in "Rumours of Death."

We're afraid we didn't understand the point of Robin Roarke's 1 pager "Of Mice and Thieves," in which Vila talks to a pet rodent, drinks a lot and never gets to do anything.

In "Turnabout" by Teresa Ward, Travis gets the worst of it, and in Leokadija's "Neltzsche Was Right," a much-tortured Soolin, Vila and Avon go after revenge against Servalan.

Avon's trapped in a cave-in, wondering if Blake will come looking for him or not in B.N. Fish's "Voices."

Dee Dee Winslow and M.R. Robber penned "The Hour of Light and Dark" with a post G-P Blake, Avon and Vila put through the wringer bv a gloating Servalan, until Avon agrees to a mysterious deal with her.

"Watches of the Night" by Joan Hoffman is a succubus/vampire tale with some softcore porm content, slightly out of place in an otherwise all-gen zine.

"Change of Heart" by a long string of initials (!) puts Tarrant through the gauntlet when he and Avon try to escape Federation troops in rugged forrest terrain.

Poor Tarrant gets the worst of it yet again in C.A. McCov's "Shared Danger," in which the pilot, Vila and Cally are betrayed by a planet's rebel faction and sold to Servalan.

In "Firebreak" by K.D. Swan, Vila develops a peculiarly uncharacteristic self-destructive streak, but in Jane Mailander's "The Longest Night" he acquires the even more credulity-stretching habit of chanting ancient myths round the campfire on good old Terminal. Even more laughable is the shellshocked Avon suddenly bursting forth into - of all things - a maudlin Leslie Fish filksong. This entire story evoked more titters than the obviously intended pathos. (Sorry, filk fans.)

Finally, there's Sue Williams' "Shattered Dreams,' with a wounded Avon accidentally left behind on a planet and hallucinating an angry Blake, whom he fears will not return for him. [3]

Yes, why is there so much emphasis on the hurt and not the comfort? Not just in BELOVED ADVERSARY, but stories in general. SERRATED COMFORT [sic] was a big disappointment that way. It could go back to people wanting to be careful about suggesting anything sexual going on, that if the guys are all concerned over each other it makes them suspect, because Real Men don't do that. Ever look at the sidelines of a football game, though, especially the losing team in a big game? Anyone gonna tell a 6'6", 300 lb. linebacker he's not a real man because he's crying with/hugging his team mates? [4]