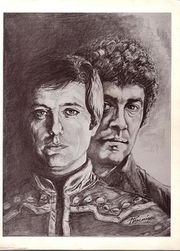 front cover by Phoenix -- "The covers by Phoenix are nice, the Blake on the front being great except for the fact that he's partially hidden by Mr. Roman Nose himself." [1] 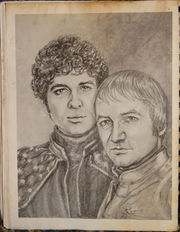 back cover by Phoenix

Love and Sacrifice is a slash 150-page Blake's 7 anthology, primarily focusing on the Blake/Avon relationship and the Tarrant/Vila relationship.

The front and back cover art is by Phoenix and depicts B/A (front) and Ta/V (back). The re-print does not seem to have the back cover art. 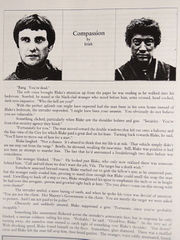 See reactions and reviews for Compassion.

So far my favorite slash story from my MediaWest zines is the "Near Dark" trilogy by Baravan, in Love and Sacrifice — and that's Tarrant/Vila! (My favorite new B/A so far IS an AU, "Compassion" by Irish, in the same zine.) [2]

[zine]: I reccommend LOVE AND SACRIFICE if you like /. It's basically 1/3 to 1/2 B/A, and the remainder is T/V. However, Blake is in every story in some way. My favorite story is "Sacrifice of Self." The covers by Phoenix are nice, the Blake on the front being great except for the fact that he's partially hidden by Mr. Roman Nose himself. The zine I'm keeping (and enjoying). [3]

[zine]: A slash zine consisting of three A/B stories and a trilogy that mainly focusses on Vila and Tarrant. While the four stories are very different in style and approach, they all take some unexpected and interesting approaches to the canon.

Marlon - "Sacrifice of Self." (A/B) This story starts from an intriguing premise - Muller's androids on the loose, overrunning the galaxy. However, once Avon goes looking for the ore he needs to construct a shielding device and finds Blake as well, the androids are forgotten and the story turns into a fairly conventional romance. Marlon reverses the usual roles, giving us a Blake who wants to opt out and an Avon who is determined to keep on fighting. It didn't quite work for me, because I can't believe in a gung-ho Avon, but it's a nice try.

[See this fan's comments for Compassion.]

Avonlea - "When to Bend." (A/B) A PWP where Avon and Blake use sex as a way of working through some of the issues about power and control raised on the flight deck, although here Avon and Blake are established as lovers before the story begins and the power play between them is basically therapeutic, with none of the edgier ambiguities that you find in other A/B stories on a similar theme.

Baravan - The Near Dark Trilogy: "Night Maneuvers", "The Hero of Cor Wellen" and "Too Long a Soldier." (Ta/V, A/B) A sequel to "In the Shadow of the Night" by Linnandel Cameron, published in Serrated Seven. Tarrant is rescued from a Federation prison camp by Blake and his Gauda Prime rebel cadre, after which Vila helps him to recover from captivity and torture. A low key but effective trilogy of stories, which takes soldiering and its consequences very seriously. While Baravan focusses on Tarrant's anguish and Vila's loyalty and comfort, there is also a sub-plot dealing with the PGP relationship between Avon and Blake, plus some well-observed political manoeuvrings on the Gauda Prime base. [4]

[zine]: I have been keen to get this zine for ages, because it has Compassion in it (which I think is great) and because Nova's review says this: "While the four stories are very different in style and approach, they all take some unexpected and interesting approaches to the canon." which, having read the thing, I think is over-egging the pudding somewhat.

[See this fan's comments on Sacrifice of Self on its own page.]

Irish, "Compassion" You should already know how I feel about this one. Two out of three of the reviews on Fanlore are by me already.

Avonlea, "When to Bend" Unfortunately the number 1 thing I would say about this fic is that, unlike all the others in this zine, it is short. So don't buy the whole thing just for this. It's only five pages long.

It's not bad, but it's nothing special either. Avon objects to Blake ordering him to remain on the 'Mission to Destiny' ship and decides to repay Blake with more dominant sex. I guess what's unusual about this fic is that it's an established relationship fic in series one and Avon tops. But emotionally... it feels like business as usual.

Baravan, "Night Maneuvers" (Ta/V, B/A) Baravan, "The Hero of Cor Wellen" (Ta/V, B/A) Baravan, "Too Long a Soldier" (Ta/V, B/A) I was definitely going to read these, because there was B/A in it and because I've loved Ta/V fics before. But I couldn't get passed the first few pages. The fic wasn't generally bad, but Vila (one of the main characters, remember, so you can't get away from it) was represented as speaking like this: "I was in some dock side dive in Space City. Was drinking and gambling, just about to take me pick of the house entertainment, when ol' Cally girl came down." Vila may be lower class, but he isn't Eliza Doolittle. I read a few pages and then stopped. I've told [livejournal.com profile] wellharkather about this trilogy, in the hopes that she will read it and then could potentially tell me whether the rest of it is good or not, but if I never read it - I can live with that.

What's also not mentioned anywhere is that these fics are sequels to 'In the Shadow of the Night' by Linnadel Cameron (a different author). I have not read the original fic, but I feel it was quite well described to me by the intro to this one. [5]

I back up wholeheartedly Joyce's recommendation of 'Love and Sacrifice'. I thought the 'modern day' a/u especially good, and re-read it several times. Had someone described it to me before reading it I'd have been very suspicious indeed, but it works very well. [6]

I can second your recommendation of LOVE & SACRIFICE, it was a very pleasant surprise, even the V/T trilogy (nice to see B/A weren't ignored though). Of course the chief appeal were the three B/A  stories, with "Sacrifice of Self" and "Compassion" being my favorites. The latter really surprised me,  since it's something I wouldn't have expected to work: bringing the B7 characters into the present day. Irish pulled it off nicely, however. It makes me want to see more B7 AU of this type, gen and adult. [7]