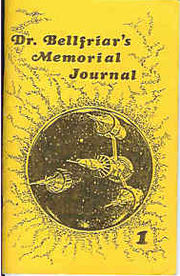 Series of four digest zines. They have some flaws, but offer a good selection of stories (mostly gen), and are well worth picking up if you see them offered at a reasonable price. The first issue has only five stories, two long and three short; the other three generally have a lot of shorts plus one or two medium length stories. The flaws: a fair number of the stories in the later issues had good ideas but very unpolished writing. Characterisation drift, POV headhopping, info-dumping, telling rather than showing, failure to provide a good reason why someone is behaving that way... I found myself itching to reach for the red pen, which means that the stories were good enough to be worth the effort of editing. It was also fairly obvious that it's an American zine. There's the occasional outbreak of the characters speaking American English, which sounds out of character for those who can hear the difference, but more of a problem are the cultural assumptions which result in some of the stories being written to press buttons that Britons and Antipodeans don't actually have. I found a couple of these irritating rather than the cute, funny or angsty that the author was clearly aiming for. Fortunately it's a minority of stories that are affected by this, and there are plenty of stories that *do* work for an international audience. [1]

Dr. Bellfriar's Memorial Journal is another U.S. digest zine, like Standard by Several. It's also produced by a fan club, the Sopron Alliance of New York City, who were known for silly fun things like holding pajama parties in the bar at conventions. (Alas, I discovered the club myself just as they were breaking up.) There were four issues of the zine... Although it's a gen zine, with no explicit sex, some of the stories definitely have R-rated content. [2]

Dr. Bellfriar's Memorial Journal 1 was published in 1988 and is 80 pages long.

Sheila Paulson's "Interference", a long get-Avon in which Avon is captured and tortured by pirates, and spends quite a bit of the story angsting about whether he was raped while unconscious. I can name one or two people who will love this one... Cindy Rancourt's "Alternatives", a long AU in which Gan is rescued alive from under the pile of rubble in Centrol Control, and Blake realises how much he's used his crew. There follows a nice long crew-bonding holiday, with enough betrayal and Federation troops to keep life interesting. Good one for Gan fans, and for A-B devotees. [3]

My favorite is an extremely juicy get-Avon, "Interference" by Sheila Paulson, in #1. Avon is captured and tortured by sadistic pirates. He's worried that he may have been raped while unconscious, but since this is a gen story, it turns out that he wasn't. (Shucky darn :). )

Gan fans should definitely check out Cindy Rancourt's long story in #1, in which Gan survives Pressure Point and plays a crucial role in subsequent events. [4]

Dr. Bellfriar's Memorial Journal 2 was published in 1989 and contains 84 pages. 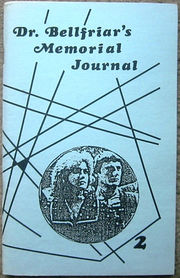 Helen Woolverton's "Madman's Choice", first in a sequence of stories about Jenna after Star One. Jenna is picked up and held prisoner on a Federation ship which makes the mistake of taking an Adromedan prisoner. The Andromedan escapes and kills the entire crew, but spares Jenna, offering her a choice of helping it or being killed. There were some things that irritated me about this story, but it's an interesting concept, and the standard of writing improves in later stories. The sequence continues with "Testing the Limits" in Issue 3 and "The Art of Naming" in issue 4. [5]

Paulie Kay's unpronounceable story in #2 is a really odd not-quite-A/V. PGP, both Avon and Vila are teachers (!) in the same school. For various complicated reasons, Vila tells his numerous relatives that he and Avon are lovers, even though they really aren't. (They occasionally sleep in the same bed, but they don't have sex.) Then Avon wakes up on the Liberator and realizes that it was all a dream. But it seems to have been a prophetic dream, since he can now speak the secret language of Vila's family. A very unusual story-- sort of like the Dome Cycle as farce rather than drama!

"Post-Mortem" is a short, intense look at Servalan's felings about Avon. Although it's not explicit, it would have fit nicely into an adult zine.

"Last Resort" has Soolin and Vila, the last survivors, meeting up several years after GP and deciding to become a team. There's no hint that they will also become a couple, but it could happen easily. For a terrific example of an explicit Vila/Soolin story, see the one by Pat Jacquerie in Southern Comfort 8.5; sorry, I'm blanking on the title. [6] 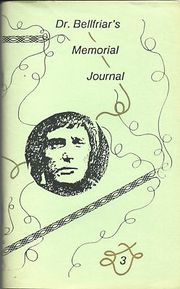 Barbara Hamilton-Fletcher's "The Wages of a Facade", in which Avon and Jenna are captured and tortured together, but Avon refuses to tell anyone afterwards how badly he's been injured.

Irene Stubbs' "Homicide" is an alternative version of the episode Killer. It's flawed but has some good ideas. [7]

#3 has two intense hc stories that in the hands of other authors might easily have gone in a smutty direction. In "The Wages of a Facade," Avon and Jenna are tortured together. Later, she accepts comfort, but he won't. Many possibilities for continuing this story!

"Blake Redux" is very slash-like. PGP, or rather alt-GP, Avon is cruelly tortured by-- Blake. Until he is rescued by-- Blake. Recommended for get-Avon fans.

"Babysitting" is another odd A-V. In this one, Vila is regressed to childhood, and Avon is obliged to care for him. [8]

Dr. Bellfriar's Memorial Journal 4 was published in 1990 and contains 100 pages. 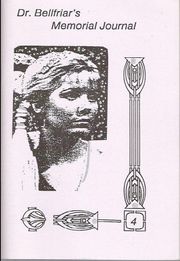 Jean Kluge's "Medusa" is a stunning illo with Blake as Perseus and Servalan as Medusa - and Avon as one of Medusa's victims. L S Chabot's "Your One-man Backup Team" shows Avon and Vila coming to terms with what happened in the Orbit shuttle.[9]

#4 has an actual sex story, "The Best Medicine." Vila is infected with a virus for which the only cure is vigorous sex. Cally volunteers to save him.

"A Walk by Day and by Night" is an Avon-Sopron story that IMO could almost be Avon/Sopron. It's an odd little story, but I liked it quite a bit.

The Jean Kluge illo in the middle of #4 is gorgeous; IMO the zine is worth having for that alone. Blake, holding up a mirror, looks into it to see Servalan-Medusa behind him. And behind *her* is Avon, already turned to stone. [10]