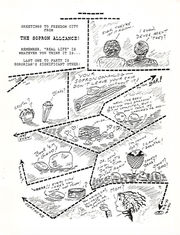 from the program book for Freedom City

club flyer that appeared in The Flotsam Chronicles. Click to read

Sopron Alliance was an New York based Blake's 7 fanclub. They produced a newsletter called On the Rocks and also organized the relaxicon Weekend On The Rocks.

The Sopron Alliance is a new Blake's 7 club which is forming in the New York City area. They propose a monthly newsletter as well as monthly meetings in the New York area, a possible fiction zine, and a convention yearbook. U.S. dues are $8.00/year overseas fans inquire with two IRCs and a SASE. Sample newsletters are $1.00 and a SASE. Make checks payable to Ms. Cindy Henry, c/o The Sopron Alliance, PO Box 6088, FDR Station, New York, NY 10150, USA.

A fan in early 1990 wrote: "Have you ever seen the scandal sheet of an East Coast Blake group called the Sopron Alliance? They are a uniquely bonkers set of admirers of the BBC's renegades." [1]

A Casualty of Fannish Conflict

This club suffered, alongside many Blake's 7 fan clubs, from the fall-out of The Blake's 7 Wars.

I think I heard this some time in 1994 or 1995. The fan maintained that the events were kicked off when Ann W. made an unintentional poke to a certain actor's ego (the fan telling me the story never gave any details of the alleged poking, something I've always regretted). No matter how it started, it escalated on both sides. The problem was that even after the major combatants stopped engaging, the gossip and rumors still flew thanks to friends and friends of friends. What bothered her the most was the impact it had on local B7 fannish get-togethers in the NYC region. Members had to studiously ignore the increasingly acrimonious arguments and this eventually strained the community and contributed to the Sopron Alliance's drifting apart (who, even these many years later, I remember her describing as a friendly, irreverent, devil may care group). They actually sounded like a lot of fun. Be that as it may, in the end I heard from many a former B7 fan that the entire mess caused them to leave Blake's 7 fandom without a backward glance. Most migrated to other fandoms, which, while not conflict free, steered clear of actor involvement and TPTB.[2]