This article is about the Blake's 7 fanzine. For the TV show, see Magnificent Seven.

"Some zine are merely quite good. MAGNIFICENT 7 is a zine that presents--consistently and for more years and issues than many publications can boast--lots of good stories. The bread and butter, or meat and potatoes of fandom are zines that contain average to good stories, maybe a misfire or two, and the occasional stand-out piece that is uniquely thrilling and best of its kind. MAGNIFICENT 7 features simple but striking cover art, neat and mostly typo-less production, and a lineup of stories that are short and long, comic and tragic, and generally well-written in their respective styles. Issues #5 and #6 both emphasize 'fifth season' stories though #6 is cited as a Servalan issue and includes several shorter, often illuminating items about her. No issue is exclusively dedicated to one aspect of the show, and these two do not omit off the wall humor. MAGNIFICENT 7 issues add up to 238 pages each, not reduced, comb bound. The reproduction is clean and the illos are not too many and not fancy. If not uniquely beautiful, it is a solid zine for story writing, as well as the less serious comic pieces that make fandom such a relief from the mundane world. Issues #1-#4 had a similarly balanced story mix, but with more material based on earlier seasons of the show, that doesn't have to take the grim finale so much into account. Overall, it's a zine worth the reading time for the fan who likes reading best.[1]

Magnificent Seven 1 was published in March 1983 and contains 146 pages. 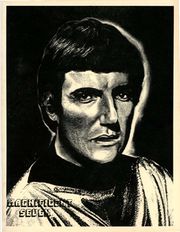 cover of issue #1 by Phred

The art is by Phred (front cover), James Doyle, Tei Ruki, and Angel. 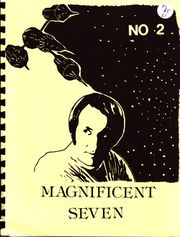 The art is by Leigh Arnold (front cover), Susan Molnar, and Tei Ruki.

The reprint omits some stories. 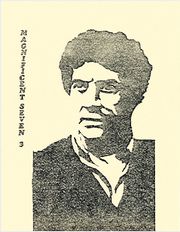 Hi, and welcome to Magnificent Seven #31 Everyone has told me I should write an editorial, so here it is. When I asked what I was supposed to write about, they said, well, tell everyone that another year is up and how Pony Press was doing.

Ok. Another year is up. Pony Press is doing fine.

It's been a long time between Mag Sevens (Number 2 came out originally in 1984), so it's really rather another two years is up.

It's been a busy two years.

The cover is by Dani Lane. The reprint omits some stories. 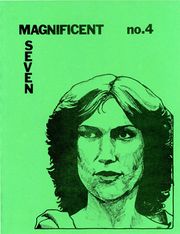 cover of issue #4 by Dani Lane
From the editorial:

This issue of Magnificent Seven will probably be called the Cally issue, but for some incomprehensible reason, the stories primarily seem to be about Avon. Odd, huh? But there are some Avon stories in which Cally plays an important role.

This Cally issue couldn't wait to be born. Before I was ready to even do it, I had an abundance of stories, poems and good 'n' varied art! The only thing that's kept it from being done before now was finding time to type, printout, proof, correct and printout. And then there are probably still typos (please ignore them -- no matter how many times you proofread, at least one escapes!)

This issue also has a lot of stories -- the number of stories being seven in previous issues is purely coincidental. Just like the next issue of Magnificent Seven (#5) only contains fifth season stories. Coincidence.

Many people have written 'biographies' about Avon, particularly of the early years before he was on the London. Some of these 'biographies' have seemed so right and natural to me (we each have our own opinions and choices, remember) that I have purposely or subconsciously come to accept them as substantiating facts to my perception of this character. In other words, they are true biographies to me. (Of course there are some things that we all seem to take for granted: the name of his brother has become standardized, and we've all accepted Avon has allergies to drugs, although that was never mentioned in the series.)

So this is to acknowledge two such stories that had some influence over the story 'Tangent':

1) 'Full Circle' by Sue Little, in Shadow One, for the idea that only Vila survived to tell the tale; in fact, 'Full Circle' was what I originally had in mind as the 'biography' Nedda brought Avon to read, for it describes to me what is the inevitable outcome of his life if he had survived GP; and,

2) 'A Tangled Web' by Sandra See in From the Other Side 1. It struck me as an accurate portrayal of both the characters of Avon and Anna, and an extremely likely, logical manner of their meeting and becoming involved, as well as the dilemma Anna would have found herself in by loving her subject. 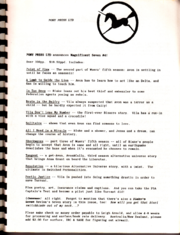 flyer for issue #4 with story summaries, click to read

[Poetic Justice]: I can't say much about this short-short (only 4 pages) without spoiling. Bang and Blame (the PGP archive) accurately call this "a real gut-punch of a story." After Gauda Prima, the Scorpio crew is having yet another discussion of expediency and expendability. What comes next is perfectly heartbreaking, perfectly surprising, and perfectly believable. [2]

Magnificent Seven 5 was published in February 1988 and has 240 pages. 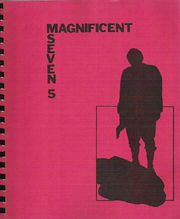 cover of issue #5, the artist is the same anonymous person who did the cover for #2 and #3

The editorial's focus is Arnold's journey in Blake's 7 fandom.

Still, post-Gauda Prime stories are the main course here, and some are very readable. L.S. Willard has written 'Reparation', in #5, which takes a roundabout but interesting course by which to rescue and reunite the fourth-season crew, and follows it with 'To what Lengths', in #6, which is even more full of convincingly plotted action and good, plain, recognizable characterizations: Tarrant is capable and impetuous, but not a thug; Servalan is the instrument of chilling horror but not a simple sadist. Mary Alice Wuerz continues a post-G.P. series (begun in issue #3) with 'Best laid plans' in #5 and 'Backlash' in #6, both self contained stories that nevertheless fit into her ongoing timeline. The plotting is good (particularly in the busy action of 'Best Laid Plans'). The introduced characters neither dominate nor fade out of the action, and the B7 characters are, again, unforcedly like themselves and pleasantly recognizable. The story series, after allowing them to recover from the trauma of Gauda Prime, lets them find a more rational, reasonable, non-homicidal existence under more secure conditions than in the aired show. This is such a relief, and the characters otherwise interact so much as we can believe they would, that I'm not sure I care to criticize it, even if the B7 universe was irrational, unreasonable, murderous, and insane most of the time. The contrast is made clear in 'Backlash' when Vila must cope with his delayed emotions about 'Orbit': the return to something of both his and Avon's fourth season demeanor is a shocking change from the easier friendship they've found in the meantime. 'Desperado' by Genn Eccles in #5 is another story that picks up Avon soon after Gauda Prime and puts him back into Blake's resistance movement, with some sharper, nastier, and quite believable interaction between those two characters. The use of Orac as a conscious entity makes a good point, and the details of the story framework and setting work better than most. The Shann illos, for this story and elsewhere, are the best in the zine. [3]

Magnificent Seven 6 contains 238 pages and was published in February 1988. 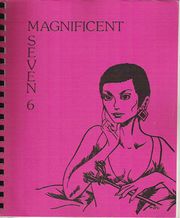 [Engineer]: One gen story that I thought had a very negative view of Blake was called '"Engineer." I think it may have been by Leigh Arnold, but I don't know what zine it was in. In that one Blake turned out to be a psychostrategist, using his professional skills to manipulate poor dear Avon. [4]

[zine]: Cindy Henry with 'Gehenna' and Leigh Arnold with 'Engineer' score with more complex stories, also using the darkest tone of B7. 'Gehenna' is not literally set in the fourth season, but puts imagery of death and demons into an action story, so that the atmosphere reinforces the inevitability of the final loss. 'Engineer' accomplishes a great deal: adds new light to Blake's character; functions as a tense slowly revealed mystery that Avon must solve; and also uses strong imagery and color in the writing style to underscore the significance of its action. The ending after all that is oddly abrupt, but this story says more, more effectively, about Blake's possible background in the Federation than any other B7 story I've seen. [5] 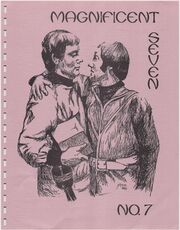 Magnificent Seven 8 was published in December 1989 and has 252 pages. Cover by by Susan Lovett. 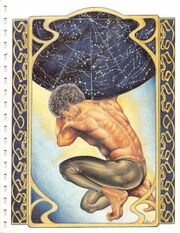 cover of issue #8 by Susan Lovett

Magnificent Seven 9 contains 269 pages and was published in March 1991. 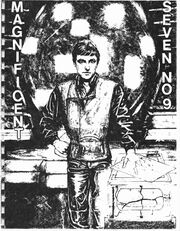 From the very, very long editorial, one which addresses The Blake's 7 Wars in a coded fashion:

Then there is the good news and bad news. First the bad. [snipped: much about "real life" taking up too much time for the editor to continue publishing zines.]

The good news is that I am putting my efforts toward launching a writing career. "Ill Winds" is currently at the agent's, waiting for an answer. And waiting. And waiting. Everyone tells me a) they take forever anyway and b) it's a good sign. And there are two more novels on the way. And several short stories. Writing in the 'real world' is very much like writing in the fandom world -- you pick your magazine and your subject, and you write and write, and you send it off, and wait.

Blake's Seven fandom has been an excellent place to learn -- to learn the craft of writing, and to learn about people. "Lone Star" took about two years to write.. "Ill Winds" (about 150 pages longer) took four months, but the practice I gained between the two books shows in the latter effort. You learn what zines you like, and how to write stories those editors write. All the nice locs didn't hurt, either, or Terry Nation's public comment about my writing. (thank you thank you thank you!)

The people part is the most valuable. Not only learning about other people, but about myself. I had corresponded with a person in the fandom and we discussed Nazi Germany and how each of us would have behaved. I can now answer for both of us because immediately after, the great "Controversy" broke, and there in a microcosm, was a harmless fantasy world in which to witness behavior, and I know how he acted, and I know how he acted. I learned the boundaries between being a fan and and obsession where people have a life and where they only claim one; where self-gratification exceeds ethics and morals; how far one would go to stay on safe terms with a power-base; how evil can be condoned even for the best intentions; how one can be physically mature but not spiritually or emotionally; and where reality and fantasy meet and cross. I've seen fans turn on idols because they weren't given enough attention or recognition by their idols, and that was sad; I've seen fans rally for truth and justice, and that was beautiful. I've seen betrayal in this fandom. I've met some wonderful, balanced people. I've met some "celebrities" one could actually talk to and be with. I've confronted fans who thought that THEY were the celebrities...

With this last issue of Magnificent Seven there are a LOT of people I would like to thank for various reasons [much, much snipped about this list of fans and celebrities]...

[I'd like to thank some fans for] your written or vocal support during the hard times, the so-called Controversy and whatever, and who knew the difference between Right and Wrong. [Doris L, Celeste H, Jean A, Kathy H, Mary M, Karlene H, Judith K, K Rae T, Carolyn B, Helen P, Pearl S, Anna S, Gail B, Dotty B, Marie P, Ann B, Judith S], and everyone who stood up for Right.