Sue Bursztynski is a prolific Australian fan writer. She is the author of around 150 stories,[1] primarily in Star Trek: TOS fandom.

She is now a professional author and reviewer. She is best known for Wolfborn, a medieval werewolf novel published in 2010.

Sue's fanfiction was published in fanzines from the late 1970s through the 1990s. Two of her stories were republished online at 1001 Trek Tales.

Sue no longer writes fanfiction, but throughout the 2000s and 2010s has addressed fannish topics on her Blogspot blog. These posts include: 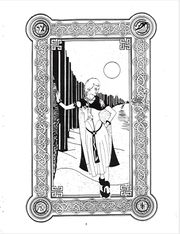 As an zine editor:

Other zines to which Sue has contributed include: