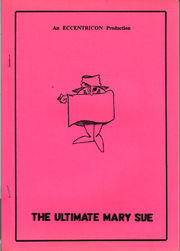 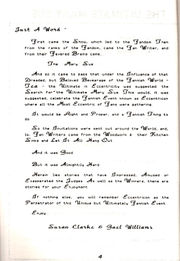 The Ultimate Mary Sue is a gen 98-page multifandom anthology of Mary Sue fanfic contest winners and other stories from Eccentricon '87. It was published in New South Wales.

The art is by Tony Rogers, Joanne Keating, and Marianne Plumridge.

In 2017, the above zine's theme was revisited for a special issue of Beyond Antares, aka the Medtrek 6 con fanzine. It featured all-new Mary-Sue and Marcus-Sampson stories to commemorate the 50th anniversary of Star Trek in Australia.

The Ultimate Mary Sue, which is just what it sounds like-- except for the first B7 story, in which a PGP Avon is apparently reincarnated as a Hoka, or at least in the Hoka universe. The Hokas are the creation of a pair of classic SF writers-- Poul Anderson and who? I can't remember-- and are in a series of stories that have been collected into books. They are basically fuzzy teddy-bear type aliens who are fascinated by Terran popular culture and like to act it out. So, here's a B7 version.

xBryn Lantry fans should note the story in which she and her cat meet Blake, Avon, and Vila.

The most original Mary Sue of all is Alan Stewart's. She saves them all and expires heroically, leaving behind her offspring by one of the crew members-- Orac. She's another computer. I think this is the first O/ocf story I've ever seen! [1]