Medtrek is a gen multifandom con zine from Australia. It contains the finalists in the fiction and poetry competitions for the Australian National Media Con.

In addition to the fan fiction fanzine, the convention also produced an online/electronic fanzine with zine reviews and other event information: ReviewZine.

The first con zine was duplicated, the second one was off-set and spiral-bound.

Medtrek 84 (aka Medtrek 2) contains 60 pages and has material from Blake's 7, Star Trek, Greatest American Hero, Hitchhiker's Guide to the Galaxy, and other fandoms.

This is another multimedia zine that is actually almost all B7. I think perhaps I will count zines as "all B7" if they are more than 50%.

I don't actually have the zine, only a photocopy of the contents page and the B7 stories. They are excellent! I wish someone would reprint these, either on paper or on line.

Does anyone know whether Shayne McCormack's "Nemesis" series was continued? I can't remember seeing it anywhere, and I'd certainly like to read it. (Of course, for all I know it may be in some of the numerous issues of Chronicles that I don't have.)

The story by Edwina Harvey is short but interesting, and Narrelle Harris can always be counted on for a good read-- in this case, an episode-like action-adventure story.

I was especially taken with Sue Bursztynski's story (and finally I can spell her name, after typing it out many times!). In fact, I think it will go on the list of favorite gen A-Ta stories that I am mentally compiling for the next issue of the Tarrant apa. PGP, Avon and Tarrant, who appear to be the only survivors, have been stranded on 20th-C. Earth, where they are supporting themselves by operating a video game parlor. They are seen through the eyes of a fourteen-year-old Australian girl. I tend not to like what I call real-world crossovers, but this one I found very appealing. The young narrator's voice was just right, and the sad circumstances of the B7 characters appealed to my love of romantic doom'n'gloom. (And of course, being also an A/Ta fan, I was imagining all manner of things going on between them that the young narrator wouldn't have noticed or understood.) [1]

I also like the author's "Gemini" series in Chronicles, dealing with young clones of Avon and Blake. Her "New Wales" series is popular and well-written, but too sweet in tone for my personal tastes.

See Eccentricon (aka Medtrek 3). The con zine was entitled The Ultimate Mary Sue. 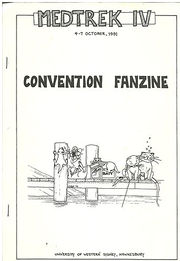 Medtrek 91 (aka Medtrek 4) contains 48 pages. It contains the entries in the Short Story Competition. The themes for the competition were "Cats" and "Enchantment Under the Sea". Illustrated throughout by the late Linda Cox Chan.

It was edited and printed by Joanne Keating.

A reunion Medtrek 6 relaxacon was held 28-30th July, 2017, at the Nepean Shores Resort in Penrith, NSW, celebrating 50 years of Star Trek in Australia. A special issue of Beyond Antares was the official con fanzine, featuring all-new Mary-Sue stories.