The Seven Live On 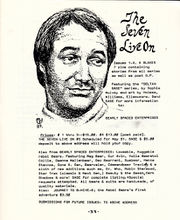 The Seven Live On is a gen Blake's 7 anthology.

"Quality varies with this, but you'll probably find something you like in each issue. And the editor is a nice lady. 8-)" [1] 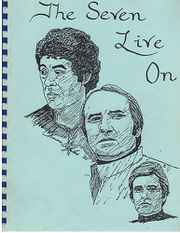 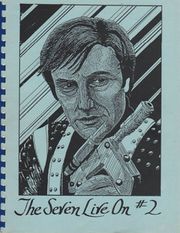 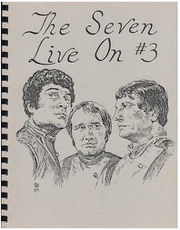 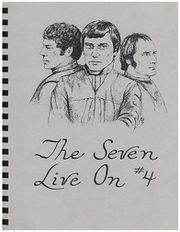 This issue of the zine itself has a copyright of April 1988, but this is probably referring to the entire series/first issue. 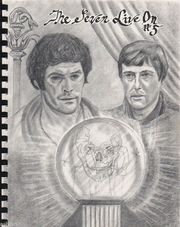 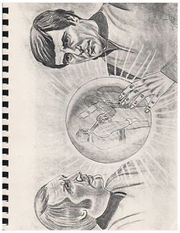 front cover of issue #6, the back cover is blank

The Seven Live On #6, like its five predecessors, could be much better than it is. The quality of its art, stories, and poems is uneven at best. The general presentation of the material is also substandard. There are many differing type styles, including some faint matrix-dot print that reproduces poorly and is eye strain city to read. The general look of the zine is sloppy and careless. Usually a zine in a series this long is better than this, reflecting the editors' increasing experience and reputation. In this case, reputation has proved a hindrance rather than a help. K. Rae Travers and Sophia Mulvey don't seem to edit their tribbers' material at all. (Probably because they are both so genuinely nice. A good editor should be part Klingon: a certain amount of ruthlessness is required.) TSLO has thus acquired a reputation for being a second-rank zine, and the more skilled artists and writers either don't submit to it or send only their less successful efforts.

The only Tarrant story in the zine is Carol McCoy's "Death of a Stranger," an insightful vignette set post-"Warlord" It's good, but quite short; therefore, I cannot recommend this zine to Tarrant fans.

The artists represented in this zine are, for the most part, unknowns. Many of them show promise, though; they could be the Suzan Lovetts and Leah Rosenthals of the future. There are some lovely portraits by the veteran Teresa Condon — particularly her Soolin on page 127. (Not many artists can do Soolin well.)

In sum, TSLO #6 is pretty much in line with earlier issues. If you enjoyed those, you'll probably like this one, too. [2] 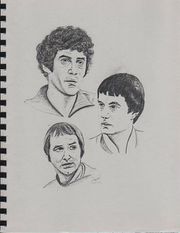 "At MEDIAWEST, I picked up issue #7 of the SEVEN LIVE ON. This zine is probably the best (worst?) kept secret in B7 publishing. The lack of artwork may be disappointing to some fans, but IMO the stories are top-notch."[3]

This 240+ page zine starts off with a giggle from Alan Moravian, "So You Want to Be a Rebel" - you might call it an entry-level exam! "Turning & Turning in the Widening Gyre" by Patricia Blasi is a masterful short piece of misdirection that leads the reader in one direaction but artfully twists to an unexpected conclusion. In "Giving Off Sparks" by co-editor Sophia Mulvey, Avon gets psychological help from Carnell, Soolin gets gravid(!), and Vila gets friendly with gnomes, elves and unicorns (yep - all in one story, and that's only the beginning!) Liberator undertakes an errand of mercy in K. Ann Yost's "First Do No Harm; Vila communes with pink elephants in C. Doshier's "Vila Quits"; "What Friends Are For" by K. Rae Travers is a 1 pager on Avon's slipping mental faculties and Vila's concern about same; Jennifer Smallwood's "Resurrection" continues an alternate universe Post-GP series wherein Soolin is a doctor aboard Liberator trying to deprogram Avon and Blake, who have been false-memory-implanted by Servalan. Another K. Rae Travers story is "Whose Rescue Is This Anvway?," in which Blake and Jenna set out to save Avon and Vila - or perhaps it's the other way round! Sue Williams' "Final Victory" is a 1-page joke; Anne Stullken's "Reflections..." is a one paragraph Vila introspective; "Friendship on Loan" by Helen Parkinson concerns kiddies Kerr & Vila and their respective teddies all meeting on a doomed shuttle flight; Catherine Kendall's "Spread Your Wings" is a lengthy speculation on Tarrant's background. Wry humor characterizes Alan Moravian's "Dating Game"; "Special Treatment" bv Susan M. Skibba posits the post-GP crew shipping Avon off to a mental asylum - or is it? Sara Talbot's "Payment in Kind" is an espionage tale in which Vila gets married. (Unfortunately, large portions of this story are illegible due to poor reproduction of dot matrix type!) "Heir Apparent" by Patricia Blasi is apparently a joke based on a drinking song with which we're not familiar. And finally, there's "A Good Idea at the Time" by Helen Parkinson, in which Blake, attacked by other prisoners aboard the London, finds he has an unexpected protector. TSLO delivers a lot of zine for the money. There are few illustrations, but good stories go a long way toward making up for that. [4] 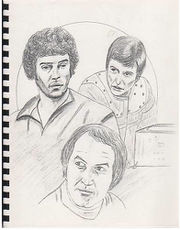 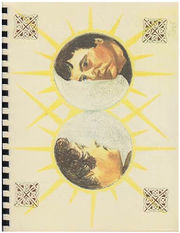 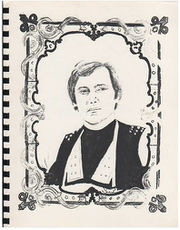 Like Chronicles, this zine tends to be spotty in quality; some of the stories are so-so, but some are really good. IMO this is one of the better issues. I consider Susan Barrett Riaz to be one of the best new B7 writers, and established writers like Marian Mendez, Sophia Mulvey, and Helen Parkinson can always be counted on for a good read.

"Hope for Tomorrow" by K. Ann Yost is from her series of Jenna's letters to her mother. Here, Jenna visits the Auron colony on Karn and hears their story. Interesting and amusing.

"The Fall" is a short vignette recounting some of the events of Star One from the POV first of Blake and then of Travis. Travis survives his fall and plots revenge, leaving the reader to wonder whether this is perhaps the beginning of a series.

"Show Trial" has lovely Avon angst as he endures prolonged torture and is finally dragged off to a trial. But a surprise awaits him there. My favorite story in the zine.

Two stories have Avon and Vila marooned in a planetary wilderness. In "Thirst," they are saved by a friendly alien who is also an exile. The title is the name of the alien character. I wish the author had picked something that is not an English word, as I kept expecting something involving the torments of thirst; but apparently the choice of name was purely coincidental. I preferred "Searching for Summer Shade," which shows us how Vila got the idea that he would be safe with Avon.

"On the Way to Heaven" deals with a budding romantic relationship between Vila and Soolin, sparked by an incident in which he is injured in an attempted kidnapping. I very much liked the role reversal of the woman rescuing the man, and I thought the development of the relationship was very believable. However, I found the flashbacks a little awkward and hard to follow.

"Deadly Waters" is a nicely written adventure story in which Avon is saved from a horrible fate by Gan. The planetary setting is vivdly described, and the action moves right along.

"Tomorrow and Tomorrow" was a disappointment. It has an intriguing premise-- an older Blake rebelling against a New Federation led by Avon-- and a nice angsty tone leading to a tragic ending. However, there is far too much explanation of the various characters' mental states for my taste. I would have preferred to be shown instead of told just what is wrong with Blake. Also, some interesting plot threads are never explained-- such as the origin of the mysterious young woman who may be Blake's daughter. And I didn't like the fact that the explanations of how to pronounce the names were inserted into the text. I found it intrusive and would have liked to see them in a little note at the beginning or end of the story instead.

"The Alphabet Gang" is another favorite. It's the story of four little girls in an orphanage who wonder who their parents were and, since no one will tell them, decide to find out for themselves. We have some suspicions, based on the prologue set on GP, the personalities of the children, and the charming illustrations provided by the author; but only at the end is all revealed. The POVs and behavior of the children are very true-to-life. Fun.

"Children of the Corn" was very difficult to follow, partly because it is a sequel to a story in the previous issue that I haven't read, and partly because there are many different characters; the story jumps back and forth from one subplot to another rather too quickly for my taste. And I didn't find any of the original characters very compelling. Example: the villainess Demoniah, who wants Avon to father a child for her. Why bother to invent the likes of Demoniah when you already have Servalan?

"Strong in the Broken Places" is a well-written story from the Deltah Base series; I found it enjoyable even though I haven't read enough of the series to keep track of exactly what is going on in it. There is a nice reconciliation scene between Blake and Avon, facilitated by Carnell, who is now working with them. We find out at last what really happened on GP.

For me, the stories in the zine fell into four categories:

OK: The Fall, Thirst, On the Way to Heaven

Not to my taste, but YMMV: Tomorrow and Tomorrow, Children of the Corn

There's some nice art, mostly by Val. The layout and printing are very well done. Overall, I'd recommend the zine. [5]