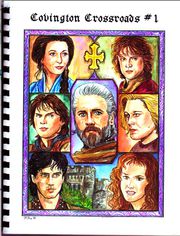 both covers of issue #1 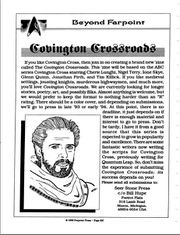 flyer for issue #1, printed in Beyond Farpoint #1
From the 1993 submission request in Bill Hupe's catalog:

If you like Covington Cross, then join in on creating a brand new 'zine called The Covington Crosroads... If you like medieval settings, jousting knights, murderous highwaymen, and much more, you'll love Covington Crossroads. We are currently looking for longer stories, poetry, and possibly filks. Almost anything is welcome, but we would prefer to keep the format to nothing harder than a "R" rating. There should be a color cover, and depending on submissions, we'll go to press in late '93 or early '94. At this point, there is no deadline, it just depends on if there is enough material and interest to go to press. Don't be tardy, I have it from a good source that this series is expected to grow in popularity and excellence. There are some fantastic writers now wriing the scripts for Covington Cross, previously writing for Quantum Leap. So, don't miss the experience of submitting to Covington Crossroads; its success depends on you!

Sword 1 is one side, Covington Crossroads is on the other side. It was published in 1993 and contains 298 pages.

The editor notes: "It is really sad that 'Covington Cross' is off the air. Yet, it is no wonder. First, the series' time slot kept getting preempted by various infomercials, and by Ross Perot. Also, the acting by certain people (and we all know the one were talking about) was quite bad. There were many historical flaws. However, the sets were beautiful, for the most part the writing was very good, and Nigel Terry and Cherie Lunghi were brilliant. The show had so much potential. I was really angry and hurt when it went off the air! If it had gotten more of a chance, I'm sure it would have found an audience. When I attended Visions '92, the Covington Cross photos in the dealer's room were one of the hottest items..." 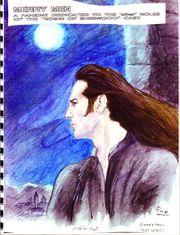 both covers of issue #2

Sword 2 is on one side. Merry Men is on the other side. It was published in 1994 and has 200 pages. The editor notes it is the second and last issue of Sword. She also writes that Merry Men is "a fanzine which contains stories based on the other roles played by the actors in the series Robin of Sherwood."