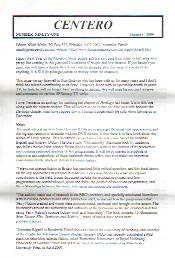 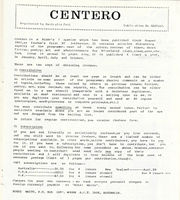 Centero is a Australian letterzine produced by the same creator who published Multiverse. It was originally Blake's 7 and later became multifandom.

One source says there are fifty issues ranging from Aug. 1982 to Jan. 1995. Another one Collecting Books and Magazines says the letterzine was still being published as late as 2003. Still, another (see below) cites the ending date at 2007. Hermit.org cites that there are 78 issues. [1]

A new B7 letter and opinion zine. First issue is currently available. A forum for B7 fans to air their views on aspects of the universe, society, technology, themes of the series, et cetera. Will have articles, comments and reviews, also club and zine listings, and advertisements. Contributions in the form of LoCs, articles, reviews (either of zines or episodes) needed for future issues. Available for trade, contribution or at editorial whim. Simply an expression of interest will get you copy of the first issue. [2]

Centero is no more, alas! I remember getting my first copy of what was then a print newsletter centred around Blake’s Seven, which was the reason for the name of the zine; in the British TV science fiction show, Centero was the location of the federation’s communications centre. Nikki White, the editor, has been a passionate media fan for many years, though she has also been writing for periodicals relating to Dracula, a favourite historical figure, as well as having an interest all the literature about him, and, in recent years, has become a member of the rabbit-breeding community, writing for this “fandom” as well. Her activism and energy in many areas has been amazing and I, for one, am really going to miss Centero, though I do understand her reasons for finally dropping it. Centero started as a duplicated zine. I remember going to the newsagency to pick up stencils on which I carefully typed my contributions, getting really upset every time I made a typo. I rolled them up and sent them to Nikki, who duplicated them on her machine and, at her own expense, sent the fanzine out to the contributors. Eventually, she had to charge something towards the postage expenses. Also, with the end of Blake’s Seven, quite a few fans found other interests. At this point, Nikki considered cancelling, but expanded into media science fiction and fantasy in general and there was a re-birth of the zine, as people wrote articles and letters about whatever their favourite shows and films were at the time. Nikki wrote reviews of quite a few media-related books and brought us up to date with whatever was happening to actors from Blake’s Seven and other shows. Stencils gave way to photocopies, as the years went on and technology changed. It meant we no longer had to worry about what happened when we made typos, especially after we all got computers. This went on for some years – and, to be honest, it became my last contact with media fandom in between cons, because I dropped out of one Star Trek club and another closed down, and the Blake’s Seven club to which I had belonged went on-line... Eventually, fed up with the incompetence of her local post office, which had been messing up deliveries, Nikki declared that that was it – no more Centero! It was not as if a whole lot of people were writing any more anyway. Around then, I suggested she have a go at doing it as an e-mail newsletter. It continued in this form for some time; Nikki even kept print copies going for a few people who didn’t have the Internet, and goodness knows, she has to be considered a saint for patiently reproducing contributions from some folk who didn’t even have a computer. It was a joy to read the reviews and the news and the articles about films and media-related books and new TV shows, and stay in contact with other fans. I looked forward to it every quarter, and made myself sit down and write something every time (I did miss the odd issue for one reason or another, but I think I’ve been in all but three or four issues since the start). However, I was one of the few who did have that self-discipline, so Nikki finally decided enough was enough. With Issue #103, the party is over. [3]