You may be looking for Splinters, a Stargate SG-1 zine. 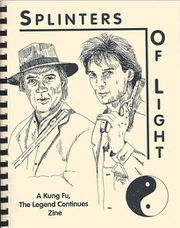 From a July 1993 ad in GAZ: "If you are captivated by the relationship between Kwai Chang Caine and his son, Peter, this zine is for you! Stories include: "Zen and the Art of House Repair" (Schlein): Peter buys a house but nights there are fraught with nightmares, "The Direct Approach" (McLure & Bridger): Tan's minions are not done with the Caines. A set-up pits Caine against a killer with Peter as the prize. "From the Darkness" (Carr): A deadly drug is used in an attmept to kill Kwai Chang. Can Peter get the antidote to him in time?" 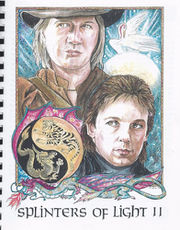 The art is by Rosanne Rice (front cover), Petra, and Catherine Schlein. 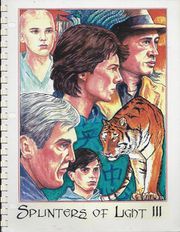 From a submission request in Dreams and Schemes #9:

Planned for late May 1995—Cathy has several stories promised for this one. In keeping with our feeling that medium sized, reasonably priced zines are needed, we are limiting the size of Splinters to around 150 pages. So, if you're interested in writing something for the zine, get it done before December 1994.

Someone once asked us why we did this, putting out a zine, and, after a moment of staring blankly at them, we replied, "Because it's fun!" It's also a lot of work! We still think it's worth it -- because each year our zines change, maturing as we do. The artwork is better now, the print more readable, the graphics no longer have to be passed down with the accompanying run-on letters for titles. Sometimes, however, when the art doesn't materialize, stories bog down, the computer eats forty-seven pages, the printer says, "The machine is broken, we can't print until next week...", we begin to wonder. However, not for long.

The real joy in fandom, of course, is the people. The artists and authors we've met and find we share more than just a love of zines with, the people we correspond with by E- and regular mail, and the people who visit. Our lives are richer for all of you. 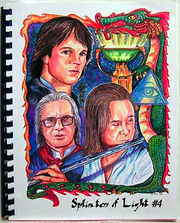