The Star Trek America convention was held either September 2-5, 1977 at the New York Hilton. It may be the first of the Schuster cons to have the title "Star Trek America."

Admission was $12 for a day pass or $20 for the full three-day weekend. 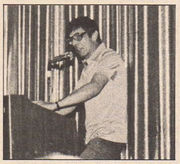 from a photo in Starlog #11, which mentions Nimoy's "less-than-festive remarks" and that this "convention was up to Tri-Star's usual competency."

Leonard Nimoy was not a scheduled guest of honor, but he took the stage, much to the delight of fans. Among other things, he read a speech addressing the turmoil regarding negotiations and the proposed new Star Trek television series and the first Star Trek feature film. See Leonard Nimoy Addresses the Star Trek America Convention (1977). 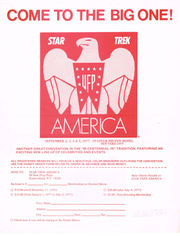 A scrapbook put together by a fan in the 1970s contains a newspaper article about the convention which can be read here.[1]

Star Trek America, held at the Statler Hilton in New York City, was my first convention and, like all cons, I've been told, it was the happiest place for a Star Trek fan to be. Four days of total Star Trek is a great experience for anyone. George Takei, James Doohan, Nichelle Nichols, and Walter Koenig were among the guests. Each of them had several talk sessions. I, of course, attended all of George Takei's.

The committee gave George a T-shirt that said Sulu, Swordsman. This brought up a subject that George said happens at every New York con. It seems that they give him a T-shirt every year.

Also, every year the people at the N.Y. cons mention the fact that George sings in the shower. He, of course, sang a few bars from Evergreen, and later he sang a lullaby that he remembered from his childhood.

On Sunday they raffled off George! That's right, there was a contest  to win some time (about an hour) with George Takei. My friend and I bought  $5.00 worth of raffle tickets, and we couldn't believe it when we were among  the winners! We had a little party up in his hotel room. We talked about everything under the sun. George Takei is the nicest person I ever met. I really enjoyed it!

Later on that day there was a panel discussion with the crew of the Enterprise (Sulu, Scotty, Uhura, and Chekov). Nichelle brought the house down with her imitation of George's laugh! However, with every crack she had for George, he came up with a better one on her! Lastly, George told us that Mr. Sulu will be promoted in the new series!! Unfortunately, he did not reveal his new rank to us. [2]

It was in New York City, in September 1977, at Townsley's Star Trek AmeriCon, that we saw and heard Leonard Nimoy proclaim, "I am here because my heart is broken. . ."

This is one of those pivotal stories, one of those moments in fandom history that you may always ask, "Where were you when Nimoy showed up at AmeriCon? What were you doing?"

Background: Paramount had been playing games with the revival of Star Trek for several years. They were going to make a feature film. No, they were going to make another TV series. Nope! Back to making a movie, and all of the cast will be in it. Well, maybe not all the cast. Everyone but Shatner and Nimoy. No – we'll do another TV series, but with an all new cast. And on and on and on it went. One popular joke at the time was Bill Shatner's apparent repeated avow that, "I have signed a contract!" There were rumors and scuttlebutt all over the place. But in the months preceding September 1977, one prevalent version took the lead. There was going to be a feature film, and every actor had signed a contract – except Leonard Nimoy. It was further reported that the guilt lay not with Paramount or with Gene Roddenberry, but with Nimoy himself, who, it was said, had refused to sign a contract and wanted no part of the project.

So all of this was swirling around when we went up to New York for AmeriCon. Add to the mix the fact that Leonard was currently appearing on Broadway in "Equus" and the rumors were riff that he would put in a surprise appearance at the con. A group of us had actually gone to see him in his show on Friday evening.

On Saturday afternoon, I think it was around 4 or 5 o'clock, my friends and I had closed up our table and retired to our hotel rooms to just relax and chill out before getting dressed to go out to dinner (I think it was one of our visits to Mama Leone's). We'd all taken off our shoes and propped up our feet and I remember that Bev was counting the money we had taken in that day; she had emptied out the cash box we used at the table. I think I was dozing off for a quick forty winks. There were several other people in our room visiting with us. The phone on the desk rang. It was Martha, from her room in the hotel. A fellow Nimoy fan friend of hers had just called. They had just made an announcement in the main ballroom that Leonard Nimoy would be taking the stage in five minutes.

You never saw such pandemonium in your life as we scrambled for footwear, scooped up the money and stowed it away, falling over each other to get out the door and down the hall to the notoriously slow moving elevators that would take us down to the ballroom. Yet even in our haste, we were being circumspect. What we did not need or want was this wild throng to descend as one on the ballroom. Remember, there were upwards of 15,000 fans at the convention! The ballroom could hold only. . .what? Five thousand at most! So as the elevator doors closed behind us, we surreptitiously glanced at the faces around us, wondering if they knew what we knew. And they, in turn were eyeballing us!

We strolled slowly toward the ballroom, then picked up our pace as we detected others rushing forward. We got into the ballroom, stood in the back as the room continued to fill. I recall seeing Lee J. wheeling Carolyn Venino in her wheelchair, going all the way down to the front where the handicapped were seated. I gave Carolyn a thumbs-up as she passed. The late Mark Lenard (who played Spock's father, Sarek, and who was a frequent convention guest) was on stage and the security force was once again guarding the stage area. In just a few moments after we got there, Nimoy came out from the wings, and amid a roar of applause and the glare of hundreds of flashbulbs, he briefly embraced Mark Lenard, then went to the podium and spoke into the mike.

"I am here because my heart is broken," he began, and a sudden hush fell over the huge assembly. He went on to say that he had been receiving hate mail, threats and accusations from the fans that he found inexplicable. One letter had referred to him as "you Benedict Vulcan." Having always enjoyed a pleasing and satisfactory relationship with his fans and with the fans of Star Trek, he was hurt by this turnaround. He understood that the cause was the rumor about his not wanting to participate in a new film. This, he said, was not the case. As far as he knew, there was no script yet, and no one had ever approached him about being in a film. "If Gene Roddenberry wants me to be in this film, let him come to me and ask." It was not, he declared, the custom for an actor to approach a studio or a producer. The studio or the producer approached the actor. And he had not been approached. Yet meanwhile, the fans were blaming him. He had come to the convention to set the record straight and to elicit the support of the fans.

Well, he had lit the fire and we would carry the torch! That night, while we were throwing the biggest Contact room party yet, with people spilling out into the hall, Carol F. buttonholed Gene Roddenberry's aide, Susan Sackett, who was also a guest at the convention. Susan had been allegedly avoiding Carol since Nimoy had spoken, but late that night the questions were finally put to her and the answers were obvious by her avoidance of the answers. What Nimoy had said was correct: It was Roddenberry and/or Paramount that was holding out.

Within days of our arrival at home, a flyer was ready to be mailed out with every zine order, with stacks sent to every zine ed and otherwise active fan that we knew. The headline on the flyer was the first line that Nimoy had spoken: "I am here because my heart is broken. . ." The flyer went on to urge the recipient to write to Gene Roddenberry and to Paramount Studios. Tell them that we would not accept a film version of Star Trek without Leonard Nimoy, without Spock. Jump on the band wagon. One. More. Time. We were getting good at this now!

The end result of it all was that there was no movie deal in the works, not to any imminent accomplishment, and it would be more than two years before the dream was realized. In the meantime, we continued going up the New Jersey turnpike twice a year, continued putting up with the inadequacies of the Statler Hilton, with a professional "show" of a convention that was all there was, but we joyously enjoyed every minute of it. We started taking in Broadway shows, and some not so close to Broadway. [3]