The 5th Annual International Star Trek Convention was held on January 15-18, 1976 at the New York Hilton at the Rockefeller center.

It faced competition from Lisa Boyton's New York Star Trek '76 convention and 1976 The Committee Con all scheduled in New York within a two-month period. The conflict was featured in an article published by the Lakeland Ledger on Feb 22, 1976. The event attracted only 4000 attendees, and it lost money. 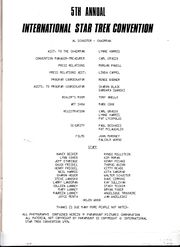 the staff, printed in the souvenir book

A souvenir book was created, one with a front and back cover by F. Boichot (not credited in book, attribution is from the signature on the illo), see above.

It's possible there was no formal program book, but simply a pocket guide, and that the souvenir book was the main booklet provided with membership.

Attendance at the con was much lower than had been anticipated, so it was quiet and relaxed. A special separate area contained the tables for use of James Doohan, Nichelle Nichols, George Takei, and STW, courtesy of Chairman Al Schuster. Many STWers on short notice helped set up and manage the table: Sharon Ferraro, Mary Ellen Flynn, Gee Moaven, and Allyson Whitfield. Assisting them were: Maria Amato, Nora Bock, Winston Howlett, Joyce Russell, and Jack Townsend (President of Walter Koenig Fan Club). Walter Koenig held two autograph sessions at the table. $187.00 were realized through sale of patches, Directories, and photos donated by Tony Anello. [2]