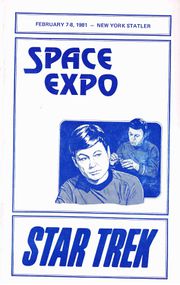 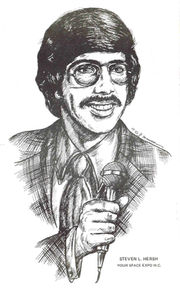 It has programming, rules, bios of the two guests of honor, a "welcome home" for the American hostages in Iran, and a portrait of Steven L. Hersh by Gee Moaven.

A large dealer's room was filled with Trek-related items: games and toys, pictures, posters, T-shirts in vast quantities, video-tapes, prozines, uniforms and accessories, buttons, and items I never knew existed. Another room was set up for sale of fanzines. There was a table manned by the ever-resourceful Canadian Contingent Press (mostly Marjorle, Maureen, Wendy, and Jacky) which kindly also sold copies of the Maplecon Filksong book. There were altogether perhaps 25 different fanzines on sale, some big and full of art, some little, some slick, some amateur-looking. I spent a lot of time looking them over. If I was going to buy any of these things, I wanted to make sure beforehand they were good.

Another room was a library of old fanzines, for those who just wanted to read. Beyond the registration area, was a huge (capacity at least 2,000, I would guess) room set up for films and/or lectures. What, I thoughti no film room? No video room? Nothing more? Perhaps World con had spoiled me, but even the littlest of SF cons I have been to have had a film room AND a video room and sometimes much more. There was no art show — not until the seoond day. Most of the artists I know did not wait for it, but held a private auction in someone's room. One of the girls In my room had done lovely portraits (in colour) of Luke Skywalker, for sale. I did not see much of the other art. It would have been painful If I had — I couldn't afford it.

Shortly after noon, people started moving into the lecture hall. The Star Trek singing group, Omicron Ceti Three, was playing. The hall was full by the time they had finished. Then a slick advertising executive-type (acting M.G. for the con) got up to introduce the Guest of Honour — but he was drowned out by the applause as the Guest of Honour entered.

DeForest Kelley looked good. He was smiling and relaxed, flanked by bodyguards but quite casual with members of the sudlence. He took a present from someone with a graclousness worthy of McCoy, accepted a kiss from someone else with a laugh, and apologized for being slow with his correspondence — his excuse was laziness. He gave the impression of thinking that all this fuss over him was just foolishness, but that he loved it all the same. The talked, briefly about his career. He told about once when he was working on "Gunfight at the O.K. Corral" and was called upon to do a scene where he had to fall, wounded. He fell — and promptly tore the cartilage in his arm to shreds. As Kirk Douglas helped him up, after the scene, he said, "You were convincing there, De. It really looked as if you were in agony." After being short full of painkillers at the hospital, and having his arm wrapped up, he went out with the rest of the actors for a few drinks — and, predictably, passed out on the floor almost as soon as he got there. "Another drunken actor," they said.

Then he was ready to answer questions. The first questions, of course, were about the new TV movie. He knew nothing about it, he said, except what he had seen in the "Hollywood Reporter" — that Paramount had signed Shatner and was negotiating with Nimoy. He had not been approached. He might be, he might not be. His favourite episode is "City on the Edge of Forever" because he feels everyone who worked on that episode was at their beet in it. He does not remember most of the episodes very clearly now. The demise of his fan club was mostly his fault, due to his laziness, and he is apologetic and thankful to all his fans. With questions still being asked, he had to call a halt and sit to sign autographs. The line-up was terrible.

Later, Shirley Maiewski of Welcommittee gave a talk, but I had heard most of it in substance at Noreascon last year.

Asimov got up to talk — which, next to writing, is probably the ting he does best. He started out by mentioning that a deecendent of his, Admiral Asimov, had been mentioned on the Suck Rogers TV show. As soon as the name was out, his phone started to ring. One of the calls was from his son. He pointed out that his son would now have to provide a few descendants. Since his son did not seem to be about to do so, he would take the only other course possible: apply to the audience for help. Surely there was some pretty girl out there ready to help create the line of the future illustrious Admiral Asimov..,? He talked about his books, all 225 of them (if you count the anthologies, he admitted; about 200 if you don't) and the five in progress, none of which are novels, although he described in detail the strong-arm tactics Doubleday has been using to get him to write another novel (which will be project #6 in progress). He told of the concern over his betrayal when he was shown in the cockpit (or passenger seat?) of an aircraft on television. No, he assured us all, he had NOT flown anywhere and never would. When he was in the plane it was firmly on the ground. Trick photography had been used to make it look as if it was in the air.

There was a slide-show, which I had already heard about, because Marjorie had already seen it five times at other cons and several people had told me it was excellent. It was. It was a series of slides drawn by the Star Trek fan-artist P.S. Nim with captions and word-balloons like a comic book or graphic narrative. It's title is 'Spook's Second Childhood'. The mood is rather like that of 'City on the Edge of Forever.' A gift is given to the Enterprise by a certain planet, a gift like a large box with a door, without instructions. While trying to discover its purpose, Spock is accidentally locked inside. When he emerges, the reversal-switch is broken and Spock is physically about 5 years old — but mentally normal, Uhura sees him and exclaims, "Oh, look at the adorable Vulcan child! Does Mr. Spock know he's here?" Kirk says, "This is Mr. Spock." Mr. Spock just glowers, Spock and Kirk then go on an espionage mission to a planet that is rather like Depression America, Kirk works for a harridan named Ma Washburn, romances her daughter Daphne, and hunts for the missing Federation scientist while Spock tries to construct a communicator of primitive materials, and gets younger, and younger, and younger.

The best thing about the show is P.S. Nim's great pictures. Her expressions are excellent: it's like looking at Shatner and Nimoy in some cases (not to mention McCoy) and the show therefore has something of the feel of a real episode. The funniest moment is when Daphne takes the three-year-old Spock to 'give him a bath before bedtime', Spock is not amused.

There was a costume competition after dinner, which Sheila and I decided to pass up (shame on me — I'm the organizer of the costume competition at Maplecon k, and I want people to be there!). We went to see "Deathtrap" and enjoyed every minute. Have you ever been to a play where everyone in the audience screams at precisely the same moment? Twice?

Before the play, twelve of us went to dinner at a recommended Chinese restaurant. We were an odd assortment of Canadians and Americans, including Pat Stall, famous (or infamous) in fandom for her art, and Carol Frisbie, notorious for her writing. Pat wore a button which said, "Who, me? Idon't draw dirty pictures!" Hah.

Sunday, I went for a walk. I saw the Empire State Building, but not from the top, since visibility was zero. I walked down Fifth Avenue and I saw the Cloisters museum and I wandered through Fort Tryon Park and It was such a lovely day I could not believe it. It must have been about 10 C and so fresh it was like spring.

Sondra Marshak and Myrna Culbreath were there with a tape they had made the day before — a message from Gene Roddenberry. The news filled us all with trepidation. Yes, plans for the TV-movie were going ahead. But Roddenberry will not be Executive Producer. Since he could not have full cortrol, he opted out. Not that he has deserted Trek. He will be 'Creative Consultant'. Creative consultant? What the heck does that mean? Anything?

We all knew — or remembered, in many cases — how the Star Trek conventions had begun at the same hotel eight years ago. Now the cons are smaller (about 2,000 at this onet at a guess) and ... different. Not as good? Well, different. Many would like to recapture old times. Impossible, of course. But we could at least have a film room. [1]