The Bi-Centenntial-10 Star Trek convention was held at the Statler Hilton on September 3–6, 1976. Approximately 5,000 fans attended. 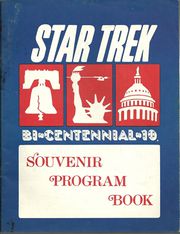 All cast members, except for Leonard Nimoy, were guests.

This con is being run by John Townsley, and it is his first con. Now one is quiet [sic] sure about Bi-10 yet, but it looks to be shaping up pretty well... I'll only give you the new details. (Their advertising is very good and you can find it all over the place) First, I have just heard that he has over 6,000 pre-registered already, That is an awful lot. And I hear the Anniversary Ball is all sold out, now that is an ST first! Bill Shatner can be added to the Confirmed Guest list. The only problem that I can for see is that it could turn into a Boyton con ... But lets [sic] all hope not, we need every con we can salvage these days. I'll be there, and I hope to see you too. [1] [2]

The September 1976 convention schedule can be seen here[4] along with the program book covers.[5]

In 1976, Starlog magazine devoted an entire issue to Star Trek and the 1976 Bicentennial Star Trek convention. You can read the entire article here. The Star Trek Scrapbook also did a 4 part write up of the Starlog Article:

At the 1976 Star Trek Bicentennial Convention, the most special guest was William Shatner (unfortunately, Leonard Nimoy could not attend because he was performing in a play at the time) And I’m happy to report that I was able to see The Shat at this event, he strode out in a navy blue leisure suit and charmed the life out of the whole auditorium of adoring fans! Unfortunately, I had a really crappy pocket camera at the time and, like in most Trekkie nightmares, none of my pictures of Bill turned out! At the moment, I cannot recall much of what he said, although I remember how the everyone cheered with delight when he referred to the storied tale of how “Leonard Lost His Bicycle” (Nimoy used to ride a bike from Trek set to Trek set to save time, and Shatner and the crew were always hiding it from him, at one point suspending just above from a catwalk, right over Nimoy’s head!)

Anyway, I don’t have Shatner pictures today, but I do have a ‘sneak peek’ flier that was passed around at the time, previewing the new biography of Bill that was still being written at this point. Titled Shatner: Where No Man… . This was Shatner’s first foray into the printed press, and the first of his several autobiographies to plunge into the awesomeness of his legend. The flier promotes the hell out the book, as well as the accompanying LP album William Shatner LIVE, which preserved several of his college appearances. The flier even includes a “questionnaire and interest checklist’ just for Trek fans to aid and assist the authors of the book (Shatner, Sondra Marshak and Myrna Culbreath. The survey really digs with questions about how Trek and especially Shatner affected pop culture and real attitudes, for example:

Do you feel that the way Shatner played Kirk, as a strong man able and willing to express profound emotions, could have had an effect on people’s acceptance of emotional opennness, especially in men?

Wow, that’s pretty deep! But considering at the time that American culture had been through Vietnam and was evolving from an era when men were strong and silent,( like say Don Draper of Mad Men), these were pretty radical questions! I admit, I never read Shatner, Where No Man… but now I may check eBay for a used copy, just to see how they used this info from fans to write the book.[6]

"Clear your mind of old connotations of the word "convention."

suites, and industrial, displays of shoes, ships, sealing wax, or

of science fiction in general and Star Trek in particular. Dress about a fifth of the participants in Star Trek tunics, tee shirts, Spock ears or alien antennae. Give another tenth

a phaser, communicator, tricorder, or doctor's kit. See that more than half are wearing a Star Trek button, banner, or piece of jewelry. Assume that every one of them has come voluntarily and plans to have a wonderful time— whether anybody else does or not,

And you'll have glimpsed what "convention" means to the Star Trek generation......

....Informal classes in animation techniques were taught; a NASA representative held a forum on the future of space travel; the L5 Society discussed very real plans for a space

everything from creating monsters to securing the services of a literary agent; lectures were given on the mysteries of Star Trek special effects; and an amateur film festival sharpened the wits of some of tomorrow's talents." [7]

It was in New York City, at Bi-Cen-Ten that we first saw William Shatner, at his first convention. He did two appearances, the first in the main ballroom, up on a stage with a phalanx of security guards standing between him and the audience for his protection, which we all thought was amusing. Poor Bill was obviously terrified of his fans! But he went out on that stage in spite of his fear, and charmed and captivated even the most die-hard Spock fans in the audience! He was witty, he was bold, he had countless new stories to tell us.

And at his second appearance, on his second day, he showed us all what made him the fearless and peerless Starship Captain. In another, smaller ballroom at the hotel, we were seated on the floor; all the chairs had been removed to allow more people in. He came out on a small balcony that ringed the front of the room. And speaking very quietly to get his audience quiet, he said, "Now. If you are all very good and remain very, very still, I'm going to come down and walk around among you. . ." You could have heard a pin drop in that room, believe me! No one dared breathe, let alone move. We were arranged in square-ish blocks, with clearly defined aisle ways, and Bill did, indeed come down and step carefully among us, talking quietly all the while, conquering his fears, endearing himself even more to one and all.

Everything was going fine until Grace Lee Whitney (Yeoman Rand), also a guest at the con, decided to pull a prank. We saw her behind Bill's back. She held up a finger to her lips to ensure our silence as she quietly tiptoed behind him. In what was meant as a tease to her fellow actor, she suddenly grabbed him around the waist. You could see the utter shock on his face as he instinctively reacted by grabbing at her hand. What few of us realized was that he had taken her thumb in a karate move and was about to break it when he realized who was there. He laughed it off and made nice with her, but you could tell that he was genuinely furious with her! After she left, he resumed his talk, but it wasn't the same; she had ruined something intimate and real between Bill and his audience.[8]