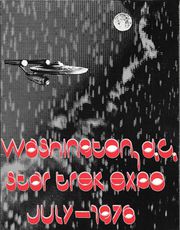 cover of the 24-page program book

This is NOT the same con as The Washington D.C. Star Trek Convention which was held in November 1976.

The chair was John Townsley.

The convention booklet is 24 pages long with lots of black and white photos and biographies of the guests.

From July 9 to 11, I had the pleasure of being among the attendants of the Washington D.C. Star Trek Expo. The convention, whose profits were to go to the Children's Hospital of Washington, D.C, ran fairly smoothly, but was not without its problems, one of which was the fact that the con did not make as much money as its committee had hoped.

The convention guests included Gene Roddenberry (creator of STAR TREK), his wife Majel Barrett (Nurse Chapel), George Takei (Mr. Sulu), Nichelle Nichols (Lt. Uhura), James Doohan (Mr. Scott), Howard Weinstein (author of the animated STAR TREK episode, "The Pirates of Orion"), and Jesco von Puttkamer (a representative from N.A.S.A.). All of the convention guests participated in both lectures and panels and all seemed hopeful that there would be a STAR TREK movie. Gene informed the fans that the movie's filming date had been pushed back to January (see this issue's "Trek Newsline"), while the stars assured the audience that they would definitely be in the full-length STAR TREK motion picture (provided the film's screenplay and Paramount's contracts were both satisfactory). John Ellis, who has contributed to STAR TREK magazines like Star Trek '75, and has run conventions in Florida, joined Howard Weinstein in talking about the animated STAR TREK, as well as some other TREK-oriented subjects.

The convention featured a display of Tim Pace's sets (portions of the U.S.S. Enterprise's bridge, the transporter room, etc.), plus a full-sized duplicate of the shuttlecraft (its insides not yet completed). Also featured was a special STAR TREK skit which spoofed the series. The play, "The Rama Lama Incident," ran about twenty-five minutes long, and was regarded by many of the convention's attendants as one of the convention's high points.

Saturday evening, there was a costume parade and contest, which featured contestants masquerading as everything from Scotty in full dress uniform (kilt and all), to the Frankenstein Monster. Later that night, the convention offered, in addition to their regularly scheduled nightly film program, a dance with a live band. The band, which was only mediocre, played in front of a screen which was filled with a fascinating light show which mixed still projections with footage from various films and television series (STAR TREK, SPACE: 1999, HORSEFEATHERS, etc.)

The STAR TREK dealers turned out in full force, providing the convention's dealers room with a fine array of STAR TREK merchandise. A few of the dealers were surprised on Sunday morning, when they went to the dealers room to set up their tables and found that some of their merchandise had been stolen on Saturday night. One dealer lost up to $600 worth of merchandise.

Even though the con ran fairly smoothly, many on the convention committee seemed to give the impression that they did not know exactly what they were doing. It might have helped this committee to have had a few advisors who were well experienced at putting on STAR TREK conventions. What upset many dealers and the convention committee was the con's low attendance, estimated somewhere between 2,000 and 3,000 people. The convention's seemingly low attendance can be directly attributed to the Washington D.C. Star Trek Expo's reportedly bad publicity. One dealer representing a local computer programming firm told me that she hadn't heard about the convention until two days before opening day, when her told her that the convention would be where she would be working that weekend. And she lived in Washington!

One committee member told me that the convention needed around 6,000 people to make a substantial profit. The number of people who did attend fell way short of this mark. The con's low attendance disappointed many, including myself, who wanted to see the Children's Hospital of Washington, D.C. get what they had been told would be a large donation. Since some of the members of the convention committee gave the impression that the Washington D.C. Star Trek Expo did not make any money (some even said that the con lost money), the committee's extremely noble intention of donating money to the hospital was not carried out. It is a shame, considering that most of today's conventions which are run to solely make a make a commercial profit are'successful, and that one of the first conventions ever to announce that all of its profits would be given to charity has to fail. The Trek Times praises the devoted, if somewhat inexperienced, committee and staff who helped make the Washington D.C. Star Trek Expo a fairly smooth-running reality. [1]