Starting with issue #11, the name was changed to "Creation Times".

The publishers were Gary Berman and Adam Malin (of Creation Entertainment, founded in 1971, which from then on proceded to make money from conventions, collectibles and such). [1]

The Monthly Trek Times 1 was published in February 1976 and contains 20 pages.

The Monthly Trek Times 2 was published in July 1976 and contains 8 pages; this page count does not take into account that on some pages, there are several standard pages worth of articles. The format of this issue is very unique. It was folded four times, making each issue, when opened completely, very large and like that of a full-sized newspaper page: the size is 23" by 15".

The editors say this issue had a print run of 7500.

Issue 2: Excerpts from the Roddenberry Interview

From the Roddenberry interview: 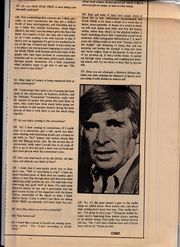 excerpt from the interview in issue #2

TT: Do you think STAR TREK is now being commercially exploited?

GR: This is something that concerns me. I think, generally, at most conventions the fans get a dollar's worth of stars, entertainment, and friendship and so on. I think that Lincoln Enterprises, which Majel [Barrett, his wife] runs has always given the fan a fair shake. As a matter of fact, the only rule I ever insisted on—I have nothing to do with Lincoln—is that if there's ever an argument it's got to be resolved in favor of the fan, if there's any doubt. It does worry me a bit when I see entrepreneurs beginning to move into the STAR TREK field because until now most of the people who have been involved in conventions and souvenirs and so on have been, pretty much, family— fan-type people themselves. I'm a little concerned when outsiders begin to get into it and say; "Oh, wow, here's a fast dollar!"

SS: What kind of money is being transacted here at these conventions?

GR: I understand that quite a lot of money has been made at the conventions. At Equicon, however, and the February "Committee" Convention, really with the amount of money that group who puts them on make, they could have done much better going out door-to-door to sell vacuum cleaners during the same amount of time it took them to put the whole thing together.

TT: Do you enjoy coming to the conventions?

GR: No! I hate coming to conventions. If I could come to a convention, give a talk, spend one afternoon meeting with interesting people, get a chance to say hello to "Ike" Asimov and various friends like that and then go home, fine. By the second day of conventions, really what I would love to do most of all is to go to bed and pull a sheet over my head and have them get me when the convention's over.

TT: Have you read much of the fan fiction, the fanzines, and what do you think of them?

GR: I think that it runs pretty much true to Sturgeon's law, "90% of everything is crap!" I have enjoyed fanzines(most of them send me copies), and I always at least flip through them and then stop when something really catches my eye. I've read some very interesting and good stuff in them. I've read some beautiful poetry in one and I particularly love the good humor in one of the magazines with the drawn foldout centerfolds of Mr. Spock or Sulu. I think they're funny. I love it when I see them not taking STAR TREK too seriously; let's have some fun, too.

TT: Have they done you yet in a centerfold?

GR: They better not!

TT: One of the things that has always been so great about both science fiction and STAR TREK is that it gives people an escape, at least in their minds.

GR: Sure, and some of them need escape. Some of them live in very unfortunate circumstances and STAR TREK is for them a dream of a world that is better, more equitable. A dream of a world in which we will look inside each other and find the beauty within, rather than what's on the physical surface. I know something about that. I remember myself as an asthmatic child, having great difficulties at 7, 8, and 9 years old, falling totally in love with 'Tarzan, Lord of the Jungle" and dreaming of being him and not wheezing and having the strength to leap into trees and throw mighty lions to the ground. It was a part of my growing up. It was a lovely dream. It carried me through many a hacking, and coughing and sneezing attack, and I'm not about to deny that to anyone else.

SS: I was wondering how you felt about the people attending the conventions, buying the STAR TREK shirts and wearing the antennae on their heads?

GR: I don't mind that. If I had time I would join the Baker Street Irregulars [an international club of Sherlock Holmes fans]; I'm a fan of Doyle's. I think it's no worse or unhealthy for science fiction fans to wear antennae and do their thing than for real estate salesmen to come to New York and spend time talking over their business. It's just when the fans take it too seriously and try to see things in STAR TREK that would never be possible to put in a television show that I really start worrying. I may put on a pair of antennae myself. I love to go to Disneyland. If STAR TREK ever reaches a point in people's minds where they can't have fun. with it, my advice to them is to forget about it and move on to something else.

Priced at 75 cents. A Roddenberry article is the only salvation for this overpriced and under-quality issue. Rating 2 stars out of 5 stars. [2]

It contains eight pages of ads and articles, plus an interview with Gene Roddenberry, continued from the previous issue. This is a semi-pro 'zine, and is at least interesting. It looks as though it will improve in the future. [3]

Trek Times 4 was published in September 1976 and contains 24 pages. On the cover: "Star Trek & Fantasy."

Trek Times 5 was published in October 1976 and contains 32 pages.

Trek Times 6 was published in November 1976.

Trek Times 7 was published in December 1976.

Trek Times 9/10 was published in March 1977. A review of one of the articles can be found here.

Creation Times 11 was published in April 1977 and contains 24 pages.

Creation Times 13 was published in June 1977 and contains 24 pages.

Creation Times 15 was published in August 1977.

Creation Times 16 was published in September 1977.