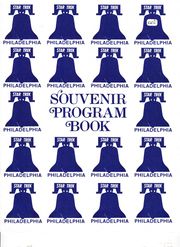 Heash [1] was the Master of Ceremonies.

John Townsely was the chair. 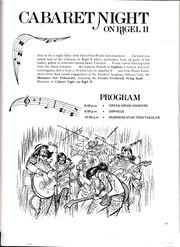 Join us for a night filled with Out-of-this-World Entertainment... the kind you would find at the Cabarets of Rigel II where performers from all parts of the Galaxy gather to entertain visiting Space Travelers... Exotic Green Dancing Girls from the Orion Colonies... the Galactic Sounds of "Orpheus," a fantasy and rock extravaganza, direct from a 10-week tour on Argelius II... and from Planet Earth direct from their smash engagement at the Starfleet Academy Officers Club, the "Mummers Star Trekacular, featuring the "Greater Overbrook String Band"... Welcome to Caberet Night on Rigel II.

A statement from one of the main promotors, chairman John Townsley, in the program book: 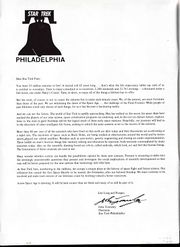 You have 35 million minutes to live! A mortal coil 65 years long. . . that's what the life expectancy tables say each of us is entitled to nowadays. Time to enjoy a hundred or so vacations, 3,380 weekends and 23,741 evenings a thousand under a full moon, one under Haley's Comet. Time, in short, to enjoy all of the things a lifetime has to offer.

But the trick, of course, is not to count the minutes but to make each minute count. We. of the present, are more fortunate than those of the past. We are witnessing the dawn of the Space Age ... the challenge of the Final Frontier. While people of past lifetimes could only dream of such things, for us it has become a fascinating reality.

And we can see the future. The world of Star Trek is rapidly approaching. Man has walked on the moon, his space ships have reached the planets of our solar system, space colonization programs are underway and, in the not too distant future, explorations to the stars in giant Starships will be the logical result of these early space missions. Hopefully, our journeys will lead us to the discovery of other intelligent life forms, seeking to unlock the same answers as we to the secrets of the universe.

More than 80 per cent of all the scientists who have lived on this earth are alive today and their discoveries are accelerating at a rapid rate. The mysteries of space, such as Black Holes, are being studied at observatories around the world and by instru-ments .aboard our orbital satellites. Wonders such as anti-matter, genetic engineering and cloning are under experimentation. There looms on man's horizon things like memory editing and education by injection, both seriously contemplated by many scientists today. Also on the scientific drawing board are robots, called androids, which look, act and feel like human beings. The forerunners of these creations are now in use.

Many wonder whether society can handle the possibilities opened by these new sciences. Pressure is mounting to delve into the seemingly unanswerable questions they present and investigate the social implications of scientific developments so that man will be better prepared for the new options that technology will offer him.

As Star Trek fans, numbering in the millions, we occupy a unique place in the history of space flight and future science. Our influence has caused the first Space Shuttle to be named, the Enterprise, after our beloved Starship. We must continue to be involved and make each minute of our lifetimes count by working toward a better tomorrow.

A new Space Age is dawning. It will be here sooner than we think and many of us will be part of it.