The term "Eel Bird" comes from the episode "Amok Time". Native to Regulus V, they have an eleven-year natal homing urge like pon farr.

THE EEL-BIRD BANDERS' BULLETIN is dedicated to those heroic Vulcans who, every eleven years, risk life and limb for the greater glory of science banding eel-birds on Regulus V. The Bulletin will be a mimeo zine running between 60-75 pages. All literary contributions must be typed double-spaced in dark ink on 8^5 X 11" white bond paper. Art should be in black ink, with no large, solid black areas. Contributors are to enclose adequate postage fcr the return of their work. The estimated date of the first issue is the summer of '77. The theme is STAR TREK, the emphasis is on well-written, credible fiction. Send contributions to: Joyce Yasner,

From an ad in the first issue of Scuttlebutt:

A mimeo zine running 60-75 pages. Probably $1.00 an issue. Contributions must be typed double-spaced in dark ink on white bond paper... Emphasis on well-written, credible Star Trek fiction... Keep an exact copy of your work so you may correspond with the editor about it. Art must be black ink, no pencil...

Eel-Bird Banders' Bulletin 1 was published in July 1977 and is 54 pages long. The title page says it is a "Poison Pen Press #42, a Beaker and Quill Production." The front cover is by Bev Zuk, the back cover is by Pat O'Neill. Other art by Gordon Carleton, Cara Sherman, and Monica Miller.

You can buy a pass to ride the PAT buses and streetcars in Pittsbugh all weekend for 1.25 [the cost of this zine]. The floorshow is usually diverse: shopping-bag ladies will set their packages on your toes, the God Squad folks will beat your ear, and the winos will breathe embalming fumes in your face. For the same $1.25, you can get the first issue of EB3. Think about it. Like the PAT buses, EB3 delivers a slice of life: a snippet of young Spock, a broad swath of tongue-in-cheek Kraith Vulcan, and choice anatomical parts of Peter Sunn. Toni Cardinal's Spock-leaves-Vulcan-to-join-Starfleet story is not unique, but it is believably low-key and, much like listening to a shopping-bag lady relate the story of her daughter's husband's sister's second third cousin's vasectomy, it leaves you will a mellow, headshaking 'glad it's not me' afterglow. Joyce Yasner's treatise on why the Kraith Vulcans only do it every 51.23 years (have an Affirmation, that is) reminds me of another bus conversation, this one between a Baptist fundamentalist and a militant atheist, each of who tried to (for once) SOFT-sell the other by logically debunking the other's arguments. The debate was a draw, but the rest of the bus was in stitches. Then there's Cara Sherman's infamous 'Origin of Peter Sunn,' reprinted with Cara's new illos. Poor Sunn -- he makes me think back ('way back) to my adolescence when beery men in streetcar seats used to plaster their flanks against my virginal bod, clamp a grubby paw on my kneecap, and wheeze , 'Ain't cha nice piece, sugartits?' Not only was I not a Vulcan ex-physics genius with gland trouble who didn't understand humans, I was incredibly DUMB. But that's another story. EB3 has stunning mimeo work, with a real fannish feel to it (nubby paper... mmm!) and impeccable printing. The artwork is uniformly excellent, the editorial is as entertaining as the contents, the smattering poetry are punishing, Bev Zuk's offset cover is gorgeous, and EB3 is the most refreshing Trekzine I've read this year. It beats the hell out of riding the bus.[1] 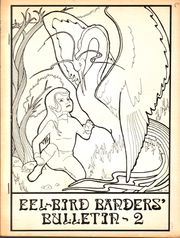 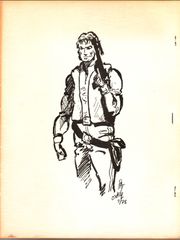 back cover of issue #2, Pat O'Neill

Eel-Bird Banders' Bulletin 2 was published in December 1978 and is a collection of 5 stories and poems and is 54 pages long. The title page says it is a "Poison Pen Press #51, a Beaker and Quill Production." The back cover is by Pat O'Neill, the front by Bev Zuk. Other art by Gordon Carleton, Susan Crites, Pat O'Neill, and Joan DeMott. The editor thanks Devra Langsam and Barbara Wenk for the loan of their typewriters.

From the editorial in issue #2:

In June 1977, I, like any good sf fan, went off to see Star Wars for the first time, and while I rather enjoyed it, I wasn't much impressed. I didn't go stark staring nuts over it like I did Star Trek when I saw my first episode of that... Star Trek America Con rolled around in September 1977, and a mob of us went off to see Swars again... Once again, I enjoyed the movie but, but beyond that, nothing much happened. A week went by. Then, Monday morning, September 14, I woke up at 4:00 a.m. with a galloping case of sympathy for Darth Vader. Weird, right? Really weird... When I fantasize, I play the role of the person I'm fantasizing about. I felt sorry for Darth Vader. That got me to thinking about what it would be like to be stuck off in a breath mask and respirator. Hell, that's what. Well, no sooner than I did try to feel what it must be like to be Darth Vader, then the sonofabitch took over... The end product is that I got to doing a story about Darth Vader. I was convinced he couldn't be as rotten as all that -- I mean, I liked him -- so I set out to clear his name. (Well, I took on Kraith, didn't I? Vader can't be much worse.) The most logical candidates to help me out in this marathon project were the Enterprise guys, and that's as much as the story you're going to get. Suffice it to say, the people who've read the working draft of this thing have shot hateful glances at me on concluding their reading. You made me like Darth Vader, was their most common complaint.

... 52 pp of some of the best mimeo in print. Thish a combination ST-SW humor sine, illustrated by Zuk, Carleton, DeMott, Crites, and O'Neill with cartoon figures. My favorite drawing is Spock banding an angry eelbird, page 5.

The SW offering is a hilarious exchange of correspondence, "The Daria Vader McClosky—Cousin Lou Beru Su Letters," by Caroline Hedge, Susan Crites, and Paula Smith, Daria Vader etc. is the well-known Darth's niece, and her description of Christmas with "Uncle Harry" (as she calls Itexth) has to be read to be believed—with giggles and whoops of laughter. Hedge-Crites do Laria, and Paula answers as the country cousin, bringing in all phases of SW, and even a bit of crossbreed with ST—tribbles are mentioned. The plot for Howard Weinstein's "The Pirates of Orio" almost defies description, but the reader won't care, as all the beloved elements of Cur Ship and Crew are parodied almost beyond recognition. Something about hunting a rare drug for Spock, who has only the obligatory few hours to live, and the use of a giant mechanical tongue to conquer the pirates' spaceship. Weird and funny dialogue—and this Kirk wants to save Spock only to be sure he gets paid a debt growing out of a somewhat sexist joke on poor Christine. See? Has to be read to be appreciated. "The Last Lay of Lt. Mary Sue" is a bawdy story in rhyming couplets about what happened to Kirk's wife when she consulted the FT about her marital problems—and he happened to be in plak tow. The Vulcan was not blamed for her death, luckily, and "...the widower, merry, returned to space." The zine concludes with "Stour Treq.: A Musical in Search of a Key," by Paula Smith. This musical comedy was performed at SeKwester*Con Too, in Kalamazoo, MI in 1977, with a minimum of imaginative props and singing talent, and a maximum of fun. Could easily be done by other fen in other places. This zine is an unusually good buy.[2]

Eel-Bird Banders' Bulletin 3 is 54 pages long. It is a single novel, one sympathetic to Darth Vader.