Al Schuster was a Star Trek fan, turned for-profit promoter. (Not to be confused with publisher of science fiction media books and magazines, Hal Schuster.)

Schuster had been a science fiction fan since 1947. He was a member of the science fiction society of City College of New York and published the SF zine "Engram." In 1971, he became a Star Trek: TOS fan.

He was active in the 1970s and most known for being a member of the original The Committee, and for his procon series of cons, the Schuster Star Trek Conventions. In 1972, he leveraged his involvement in the Star Trek Lives! cons to other cons. See Detroit Triple Fan Fair and "Free Beer!".

In 1974, Schuster was quoted in the mainstream press about the Star Trek Lives! cons:

At the first New York based convention three years ago... the fans only totaled a paltry, by comparison, 2500. No one had counted on such a turn-out. Al Schuster, the organizer of the convention, and an entrepreneur, hadn't even originally planned on a "Star Trek" convention.

"I did it for ego," he said. "You see, three years back I bid on the World Science Fiction Convention. A number of people bid on it, and my bid was too low, so I lost. But to prove I could do it, I had a "Star Trek" convention. It was supposed to be perhaps two hundred and fifty people, and instead 2500 people came. Since then, I couldn't care less about the Sci-Fi conventions because this is bigger than that ever was.[1]

John Townsley was an oft-partner in Schuster's various later promotions. 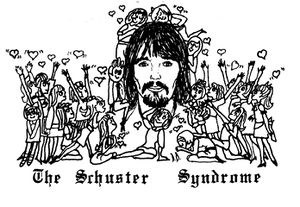 An illo of Al Schuster, from the first issue of At the Helm: "The Schuster Syndrome."

In the Beginning, there was Al Schuster, and the Committee. And the two would be split, and briefly each would offer up a different event, before Schuster would reign alone as the King of New York. His Heir Apparent was a man named John Townsley, who inherited the multitudes which Schuster and the Committee had grown.

Conventions in the Schuster era were notable only for the masses of pilgrims who came willingly to each one. Al Schuster was a promoter, an entrepreneur who staged "shows" much like today's Creation Cons. There was no "programming" to speak of, nothing past 5PM except Costume Call, no panels, no use of fannish talent. There were only the actor guests, but for those of us who had never had an opportunity to get up close and personal with any of our beloved Trek idols, that was enough. And we knew no different kind of convention experience.

New York wasn't the only venue for Schuster. He staged smaller cons in Washington, DC, in Philadelphia (at the hotel later known for the "Legionnaire's Disease"), and in other cities farther removed from me. At these "smaller" cons, the guest list would be shorter and the con would last only two days. And the reign of Schuster was only for a few years, although it seemed longer at the time. But it was John Townsley who put on the Show of All Shows – Bi-Centennial Ten – which was in 1976, only three years after Schuster started with the Committee in 1973.[2]

"Well, to put it quite bluntly... I don't like Al Schuster. I know what's really been going on, the con game he's been pulling. And when I first heard about 'Al Schuster's Fourth Annual International STAR TREK Convention', I said,"Okay, that's it!" I decided I wanted to "stick it to him" at his own con, in a way that was not illegal, not immoral, and nobody would get hurt." [3]