The Conning of a Con (OR THE "OH MY GOD THE MUGATU WANTS TO PLAY GAMES!" Syndrome)

The Conning of a Con (OR THE "OH MY GOD THE MUGATU WANTS TO PLAY GAMES!" Syndrome) has the subtitle: "A True Story." 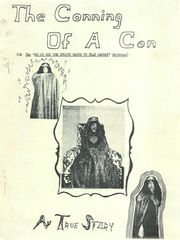 It is an eleven-page zine consisting of an interview with "Warlock," a male fan who dressed as a woman for the 1976 Al Schuster's International Star Trek Convention costume contest.

The interview was conducted by Paul Kirby.

The interviewee was "Warlock." He states that he decided to enter the costume contest as a female character. His entry card read: "Barbra Wheadon...New York City...as Dracona, the vampire queen of Ka-Lahn"

The reason for his choice of costume: "Well, to put it quite bluntly... I don't like Al Schuster. I know what's really been going on, the con game he's been pulling. And when I first heard about 'Al Schuster's Fourth Annual International STAR TREK Convention', I said,"Okay, that's it!" I decided I wanted to "stick it to him" at his own con, in a way that was not illegal, not immoral, and nobody would get hurt."

Warlock: Nope:. Never [had I been in a Costume Call before]. Nor had I even considered anything like 'Barbra' before.. But the whole thing didn't come together until I saw a film piece on a local news show in November. A hosiery shop on Madison Avenue was losing its lease because the landlord didn't like the fact that the owner was not only selling stockings and foundations to women, but also supplying stuff for female impersonators!

W: Yeah. I took note of the address and went down and checked the place out. And sure enough, there was everything that I would need. Especially the 'female shell.'

PK: You mean the 'cleavage' thing?

W: Yeah, It's like a woman's front from the neck down to a couple of inches above the navel. It's made of latex-rubber I had to paint it with some Max Factor makeup to get it to my skin shade. I call it 'the Convincer' because it was the main thing that made people believe that 'Barbra Wheadon' wasn't something other than 'she' appeared to be.

PK: You must've gotten a lot of strange looks when you bought the rest of the clothing, like the cape and the long skirt...

W: No, not really. You see, I bought most of the stuff just before Christmas, so the salespeople automatically assumed the stuff was for gifts.

PK: Did anybody know what you were up, to?

W: Well, I told one girl that I know, and she-almost flipped out! I figured it was safe to tell her 'cause I knew she wasn't going to SchusterCon. I dropped a couple of hints to a few friends of mine, but not enough for them to guess.

There was only one person out in the hall — a girl — and she tried to pretend not to notice me...as though she was perfectly used to seeing 6-foot-tall girls wearing green Halloween masks!(Laughs)The panic really started when we got into the elevator! I was forced to stand in the front, just inches before the closing doors, because of a huge luggage rack a maintenance man was taking down to the lobby. Nobody said anything when the vampire queen got on, but a few floors later, some wise guy in the back 'says," If you're a girl, I wish you luck...If you're a guy, I wish you even more luck...and if you're something in between, I wish you all the luck in the world!"

PK; Why did you have to stay away from her?

W: ...Well, it's been said that some women can spot a phoney woman in a split second. For some reason, I felt that that sexy 'bombshell' would be able to spot me a mile away! But only good things happened on the terrace, particularly v/ith the photographers...

PK: What happened with them?

W: When I let the cape open, they took immediate interest in Barbra Wheadon's cleavage.'They surrounded the vampire queen in a semi-circle and fired away! I felt like a model in a weird 'Cover Girl' commercial! I did three or four different poses, including the old vampire's-cape-hiding-the-lower-half -of-the-face routine. They loved it! a little later, I just sat down in a chair on the terrace waiting for the Costume Call to get started. They had delayed the start, waiting for some of the judges...

PK: Who were the judges?

W: Yeah, the little Underwood Chicken Spread king himself! I think he had to sit on a phone book to be seen...

PK: What were you afraid of?

W: Well, first of all, here I was in front of people I had dreamed about meeting for years: the captain of my favorite, starship, his engineer, one of the world's greatest science- fiction writers, a world-famous television personality...Here I was, standing in front of all them in drag! The utter wildness of the moment was almost too much. And then, on top of that, I was sure a certain one of them would see through the disguise...

W: No, Harlan Ellison. With his 'bear trap' of a mind, I had little hope of fooling him... But then, as I faced them, I realized I was getting the world's most peculiar grin from William Shatner! It was then that I remembered that he had done the same thing I was doing --

W: On the STAR TREK set, one day during production. I heard the Makeup and Wardrobe helped him pull off the gag one morning: false eyelashes a wig, a long dress, rhinestone earrings, playing Spock's harp and singing "Tiptoe Through The' Tulips" in falsetto...

PK: You mean that's it? You didn't plan to unmask?

W: Well, 'yes' and 'no'. While I was on stage as a semi-finalist, I decided that if I won one of three top prizes I would quietly walk over to Phil Seuling, the M.C., take' oif my tiara and hand it to him, and then take off the mask and wig and watch the whole room explode, and Al Schuster go into cardiac arrest!

PK: Why wouldn't you do it if you lost?

W: Because it would make me seem like a sore loser...Besides it would've taken attention away from the three winners who fully deserved their time in the spotlight...

PK: Did you tell anybody after it was all over? W: After I got out of the costume and packed it away, I put on some of my regular clothes -- male clothes — and went upstairs to the room of some girls I know. I very subtly "laid it on 'em"...and they didn't believe me! Then I tried telling them straight out, and they still didn't believe me!

W: ABC had a film crew at the Costume Call, shooting stuff for that show. They caught Dracona on film!

W: A seven-second close-up of her face and hood.

PK: So, you made nation-wide television after all, eh?

W: Yeah. When I saw the show, I almost died. Nobody who was around me knew why I was laughing so hard...

PK: Okay-, I have just one more question, and this is just to clear the air. I hope you won't take it personally --

W: Yeah, I think I know what you're going to ask, and the answer is "No, I am not a transvestite." Just like any other STAR TREK fan, I'm just a lover of illusions...

W: Well, every time we watch STAR TREK, we're seeing a long string of illusions. We believe we're looking at a big vessel that can span the galaxy, instead of a batch of plastic, plywood, and miniature light bulbs. We believe we're looking at an acid-spitting Horta... or a Gorn...or a deadly Mugatu, instead of guys in costumes with sound effects added.

And that's all I did, created an illusion: a living, walking, breathing 'special effect'. Putting on an effeminate costume doesn't make me a queer any more than — Look, at Infinity Con I saw three people at that Costume Call come as "Fafrhd; The Gray Mouser; and The Dark Force". I don't read very much Sword & Sorcery, but do know that in the stories The Gray Mouser is a man! I didn't hear anyone at that con call the woman who played The Gray Mouser a 'butch'! If there is going to be equality of the sexes, I think that that's - another part of the sexual double standard' that is going to have to be removed...