Inside Star Trek is a Star Trek: TOS for-profit LP. 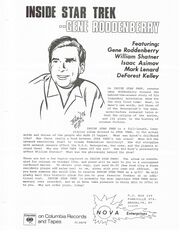 an ad in The Clipper Trade Ship #13

It was sold by Columbia Records, but had a relationship with Nova Enterprises, a fan-run merchandising company, something that touches upon fandom and profit.

Although this is a hard-to-find album by Columbia Records, it is well-worth pestering some record shop to order it or find it hidden in the stock.

Here are just a small few of the highlights of the album:

"William Shatner Meets Captain Kirk:" William Shatner said of his role as Captain, ". . . what essentially comes out is William Shatner saying the lines that were Written for me to say in a situation that I was placed in . . ." He went on further to say that he was mostly just acting the role of Captain.

"McCoy's RX for Life": DeForest Kelley says that McCoy has influenced his personality because ". . . he has some human qualities that are really worth emulating." Kelley said that Star Trek really gave hope to people, especially terminally ill patients, ". . . somehow if you believe it will happen, it will happen."

"A Letter from a Network Censor": Roddenberry reads a "typical" memo about a script, "The Bible" submitted to a network censor. He points out in several witty parts that the Bible wouldn't be respectable for "Family Hour viewing."

"The Star Trek Dream": The last section of this record sums up Roddenberry's feelings. How he became first connected with science-fiction, from his childhood of being handicapped. He expressed his feelings that if he had been a normal child he probably would not have gone on to become a writer. "Ah, how lovely all our daughters are inside, how fearless all our sons. If only we could see it," seems to sum up the dreamer's creed; it isn't what someone looks like, but what they think and can give that matters."

To sum up this review, I'd like to say it was probably the best $6.10 I've ever spent. If you don't have this album I urge you to go out and borrow, beg, or buy a copy. It is informative as well as entertaining, and humorous, too. If your record store doesn't have it on the shelves, ask a clerk if it's in the back or to order it especially for you. [1]