Nova Enterprises was a fan-run company created and operated by Elyse Rosenstein and Steven Rosenstein.

Initially, it sold only Trek-related products, both fannish as well as professionally published Trek books in some sort of intermediary way between Ballantine Books. [1] 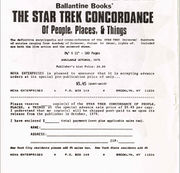 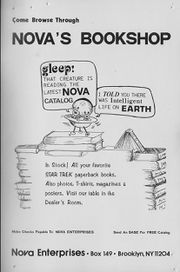 While Pines started Nova as a predominately Star Trek mail-order business, over the years it grew into an international mail-order bookseller of SF&F books, records, role-playing games and equipment, and specialty publications. As of about 2020, Star Trek represented 10% to 20% of the complete catalog.

This is NOT the same outfit as the 1974 "Cyrano Jones' Trading Post" which was a Star Trek section at a Missouri, US book store called "The Book Rack" and the producer of the monthly bulletin, Sub-Space Chatter.

A Lot of Cross-Pollination

It was the "Nova Enterprises'" mimeograph that produced a number of the old zines, and example of the melding of many fans' creative endeavors.

Devra Langsam wrote in he editorial of Masiform D #7 in July 1978:

Well, friends, it's finally happened. My dear old mimeo will no longer feed reliably (I don't call a system where you have to hold the paperweight with your finger reliable), and the motor on the NOVA Enterprises shook the house so much that the landlady called down to find out what kind of factory I was running beneath her. The repairman cheer fully informed me that the Rosensteins' universal joint (that which connects the motor to the printer, transmitting power from the one to the other—rather like a dilithium crystal) was GONE. Sorry, lady. Of course it works manually — I just can't run the motor. SOOO—I have finally broken down (after hand-cranking 114 pages for Trexindex — NO, no, Barbara; don't hit me. YOU hand-cranked 99 of the pages!) and ordered a New second-hand mimeo. Until it arrives, I'm using yet another leaner machine. Thanks, Roger. Meanwhile, I'm supposed to get my own new one in time to finish printing this. Pray for me.