Vulcan Reflections is a Star Trek anthology of non-fiction essays reprinted from Spockanalia. 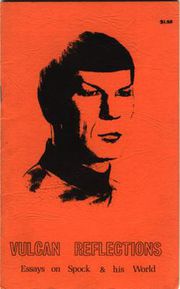 The original essay, "Thoughts on Vulcan Culture," was written before the episode Amok Time aired, and some of its speculations were jossed. "Vulcan Reflections" contains an addendum to the original essay.

Excerpts from the addendum to "Thoughts on Vulcan Culture":

A number of profound revelations about the culture of Vulcan were made last September 15. Although certain observers were not happy about what was learned, few came to the obvious conclusion that Vulcan simply as not attained the easy, smoothly running, mechanically logical culture and it holds as an ideal. The people have deeply-felt biological needs, and, as with all cultures, this one must find a way to fulfill or sublimate these needs. Until they can be genetically eliminated (if ever), they must be controlled, and this is the part of culture.

It seems clear that there are many complexities as yet undiscovered in the Vulcan culture. The culture which produced Mr. Spock must be good deal more varied and problem-filled than the rather dull stereotype we were led to infer from early information. We hope that future information will bear out our belief that the culture is as alien and interesting as it now seems to be.

This collection of articles from one of the most famous of the original Star Trek fanzines (Spockanalia) contains four articles which are as valuable today as when they first appeared.

The first article, "Thoughts on Vulcan Cul ture", treats the Vulcan family "unit. Specific ally considered are Vulcan names (their emo tional or logical basis), the effect of alcohol and other stimulants on Vulcans, and the pon-farr and Vulcan marriages.

The second article is entitled "Vulcan' Psychology" —a brief psychoanalysis of a Hu man-Vulcan hybred, that is Spock. This im portant article explains Spock's fight between his Vulcan and his human origins.

Article three talks about Sarek and Amanda, and the possible consequences that their marriages are arranged for genetic perfection and this perfection can result from interracial hybreeding, there may have been some other race in T'Pring's personal heritage.

The final article is about the physical make up of Vulcans. They must not have malanin (that dark pigment found in skin, retina, and hair) since melanin would leave revealed the green color of Vulcan blood. And, we know Spock did not appear green. The reason Vulcans have such a low tolerance to cold is be cause of their poor circulation. (This article has to be read to appreciate these statements out of their context.) The articles in VULCAN REFLECTIONS are authentic studies, highly recommended, and basic readings for all Trekkers interested in any thing, or anyone Vulcan. [1] 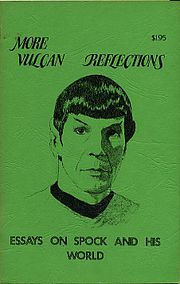 More Vulcan Reflections: Essays on Spock & His World was published in 1976 and originally compiled by Devra Langsam and Sherna Comerford. It contains 26 pages.