her bio from the 1976 Space-Con program book

Shirley Maiewski was an influential Star Trek writer and fanzine editor in the 1970s and 1980s. She was sometimes referred to as "Grandma Trek" and "The Grandmother of Trek". 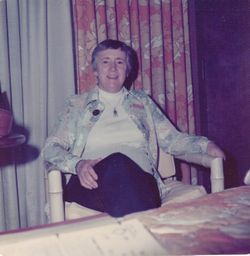 Shirley at a Equicon room party in the 1970s. This photo has been uploaded with both Shirley's family and the photographer's permission

She was responsible for guiding and mentoring all those thousands who were coming into this new fandom. From the very first letter campaign in 1968 (which resulted in giving ST its third season), Shirley worked tirelessly to keep the flame alive and to resurrect the show. In her spare time, she managed to write one of the most beloved and honored stories, "Mindsifter", which was chosen for inclusion in Sondra Marshak's "New Voyages". She also contributed to other zines and was one of four fans who created the "AU-4 [Alternate Universe 4] series... Shirley was already an older woman when Star Trek came into her life, and she was fondly known as "Grandma Trek" to one and all. She was from Massachusetts and was an avid fan of the Boston Red Sox, as well as a devotee of the opera world. Shirley was often a guest speaker at many early conventions and loved to promote and talk about the ST Welcommittee. A survivor of breast cancer, her death was caused by heart problems late in her life. She was one-of-a-kind, a genuinely sincere lady who felt all the world's problems could be solved by sitting down and talking them out. She detested gossip and backbiting in any form, and wasn't too ladylike to let you know it. [1]

In addition to writing and publishing the Alternate Universe 4 series of fanzines, she created the Lightfleet saga with Daphne Hamilton, Anna Mary Hall and Virginia Tilley, and was the chair of the Star Trek Welcommittee, connecting fans in the days prior to the Internet. Volunteers took on the job of gathering information, answering questions, and producing a directory. One of her stories, "Mind-Sifter" was reprinted, in a radically altered form, in the commercially published Star Trek fan fiction book The New Voyages.

Many fans who read the original version [of "Mind Sifter"] when it appeared earlier in Showcase claimed the fanzine version was better. [2]

Ten years after Mind Sifter was published, Shirley Maiewski commented on this story and explained why she didn't write else anything after it:

I agree whole-heartedly... re the sniping, called 'critiquing.' at Trek writers! Some of those doing it are dear, dear friends, but, doggone it folks! Gee! We do this for fun, after all, at least in zines... Somebody likes them or they wouldn't be printed! Many, many fans enjoy all ST stories? Why make them feel dumb by telling them they have no taste or smarts? It's an awful putdown to read that something you have enjoyed a great deal is 'poorly written; no character development; a -- horrors -- Mary Sue!' So what? Frankly, people have asked why I don't write more after the success of Mind Sifter. It's a long story, but there are two main reasons: First, the damage done to my story by editors (without my knowledge or permission), second, the thought that anything else I might write would be torn apart by the 'experts.' Best reasons in the world for a terminal case of Writer's Block. [3]

The original Mind-Sifter was released as an episode of Star Trek: Phase II on December 1, 2014, and is available on Youtube for free. [4]

About the First Star Trek Con

From a 2000 letter to the Canadian zine Trexperts:

It is hard to believe that it has been twenty-eight years since the very first all STAR TREK convention was held!... Since then there have been literally hundreds of them, all over the world. I was fortunate to have been one of those who went to that first one... The con, as they have been known ever since, was held on the top floor of the hotel— eighteen stories up. The Committee thought there might be about 800 people attend, but when they stopped counting on Sunday afternoon, there were over three thousand! And they realized they had something! Yes, it was crowded! The guests at the con were Gene Roddenberry, Majel Barrett Roddenberry, D.C. Fontana, Bjo Trimble, Richard Arnold and an exhibition of NASA material... Others there were sci-fi writers Isaac Asimov and Hal Clement— both STAR TREK fans. One of the main attractions was the Dealers' Room, where one could buy all kinds of Trek mementos. One of the tables was run by Bjo Trimble. I had corresponded with her a couple of times and was so pleased to actually meet her at last. You may remember that Bjo was the one who started the letter-writing campaign that saved STAR TREK after its second season. I went up and introduced myself to her and before I knew it, I was helping her run her table! That's how things go at cons! Later on, Bjo closed her table and we went walking through a hall, when Bjo said, "There's Isaac Asimov. Want to meet him?" Of course I did and she introduced me to him. I had read his books for years and it was a great thrill to meet him. Not only meet him, but get kissed as well! Seems he always kissed ladies when he met them. Back to the con— D.C. Fontana gave a talk on how it was to write for the show and answered questions. One question asked was "What does the T stand for in Kirk's name?" That was never explained in the original series, you know. Dorothy came right back with "TIBERIUS!" Seems it was a nickname they used for Shatner on the set! Now you know! Another first at that con was the showing of the Blooper Reel— the out-takes from the shows. They played to a packed house, and you could not hear a line of dialog because of the screams of laughter! I had to see them several times before I heard the words. They don't show them anymore, which is sad. Of course there are boot-leg copies around, which is sadder! It was at that convention, back there in 1972, that I met three special women, who had a great influence on my life. One was Bjo of course— we are friends to this day. I also met Joan Winston, one of the members of the Committee, another woman I became very friendly with. The other woman was Jacqueline Lichtenberg. Her name had gotten out as someone who knew a lot about STAR TREK. As a result, she was getting a lot of mail from fans asking questions. She had decided to start a letter-answering group, which she called The STAR TREK Welcommittee— and she asked me to help. At first I thought I could not do that, but she talked me into it. That was 1972— The Welcommittee served for almost 26 years, answering thousands of questions— for free! Yes, I could do that— I served as Chairman for twenty-two of those years, until it ended in 1998. See what can happen if you go to a con? Be careful who you talk to— NO! I don't mean that! The great thing about conventions is that you meet so many great people! I have dear friends all over the country and all over the world for that matter, that I met at conventions or other STAR TREK gatherings. Times have changed, of course— prices for one thing. As I recall, our room at the hotel cost something like $27 a night that time. The last con I went to in New York about three years ago I had to pay $127 a night! The tickets for that first con cost $3.50. Nowadays they can run almost $100 if you want reserved seats. I seldom go anymore, Much as I'd like to, unless they are close to home. I do recommend them, however, go if you can! You will have fun. [5]

A 1978 Comment Regarding Tolerance and a Respect for Diversity

In 1978, Interstat, always a hotbed of strong opinions and controversy, was embroiled in an especially heated debate regarding several topics. While Shirley did not comment specifically on any of these subjects, she did write a letter reminding fans of the beauty of an open mind and of appreciation:

I am going to tell you a story, which HAS a point. When I was a child, long years ago, I lived in New Jersey. My Aunt and Uncle lived in Massachusetts and every summer, during my father's two precious weeks of vacation, we went to visit them. It happened that Aunt Vi and Uncle Charlie ran a wonderful seafood market. My parents loved seafood, and while we visited, my Aunt Vi would load the table with wonderful fresh fish — cooked just right. There were great mixing bowls full of shrimp, others filled with lobster meat. On the stove there would be a wash-boiler of steamed clams. There were platters of flakey white fish, bowls of quahogs (little necks to some) on the half-shell plus bowls of vegetables and fresh bread. (I hope I have your mouth watering now, as mine is). We would all gather around the table, my parents. Aunt Vi, Uncle Charlie, at least two cousins and usually a couple of other relatives. Everyone would start passing things and then I would pipe up, "There's nothing here I like! I want a hamburger!" Why I wasn't throttled at a tender age, I'll never really know,except I had patient, loving relatives. My point is this — here we are with the whole, wonderful world of STAR TREK and all it has to offer, the show itself, which each of us has our own reason for enjoying; Fandom in all its parts and most of all, wonderful friends. Think who you would NOT know if not for STAR TREK... (shudder!) And what do we do with all this? Sit back and pout and say, "There is nothing I like" — or — "I only like hamburger". To others I'm sure we sound like a bunch of spoiled brats! To return to my 'story', today of course, I would give anything to be sitting at that laden table, with my loved ones around me — all have gone now — and to be able to sample even a bit of that wonderful spread. Think about it, dear friends, think about it... [6]

As one of the Senior Citizens of Fandom, I'd like to comment on the wonder of being able to sit in my living room and see motion pictures that at one time could only be seen in theaters! I realize many other fans cannot remember a time without television, but there was a time when after a movie finished its theatrical run - that was IT! I remember how I wept when a particularly well-loved Nelson Eddy film closed (date myself, don't I?) and I thought I'd never see it again! Now with TV and TV recorders, we can enjoy a film over and over again! Progress! Isn't it wonderful? I think so! In my lifetime we've gone from Lindberg flying the Atlantic to Space Shuttles and Voyager! Imagine what some of you younger people will see! Enjoy! [7]

Shirley is often affectionately called "The Grandmother of ST" ... I and many fans are indebted to her, and a few others like her, who virtually founded ST fandom and helped then-neofans like myself to get around it. If it weren't for Shirley and others who refused to let TOS die, there would be no fandom, no TNG, no DS9. Since my return to fandom, it has heartened me to see veterans like Shirley, Joan and Ruth Berman still plugging away. It is no exaggeration to say that without these good people, none of us would be here. [8]

Some of these tributes below contain photographs.