"This convention is sponsored by the University of Massachusetts (Amherst); Science Fiction Society. The organization was founded by A. Joseph Ross, who for many years was very active in NESFA and Boston fandom. Note that, at the second con, the writer, artist, and fan guests of honor are the same person (well, not Shirley Maiewski). As of NJA4C the sponsors are called the Science fiction Conventioneers of UMass (SCUM). This organization is separate from the UMass SFS for legal and financial reasons." 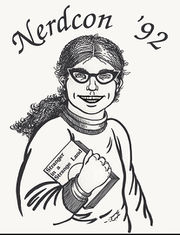 cover for the subsidiary "Nerdcon." Art by pyracantha.

Yes, that would be me. Not in 1992, but in 1969 which would be a high point in nerdiness for me as well as the ossumness of the Buchla synthesizer and my trip to Europe. I'm wearing my shabby grey sweater and a similarly shabby turtleneck. Fashion and I were not friends in those days. (Or any days, I guess.) I have those hideous black "cat eye" glasses that were popular about 10 years previously, and my hair is frizzy. I'm carrying Heinlein's "Stranger in a Strange Land," published first in 1961, which was the rage among the more intellectual types in the ritzy private school I went to.

"Nerdcon" wasn't a real con, it was a party to be held at "NotJustAnotherCon" at the University of Massachusetts in Amherst. The invitees commissioned me to do the program cover art which would also be on the invitations and T-shirt. So "Nerdcon" was a mini-convention inside another convention. I must have gone to it but I don't remember much about it, even without alcohol. This was a college convention so drinking was illegal. As for NerdMe, fortunately by 1970 I had gotten rid of those horrible specs and wore a more modern set. 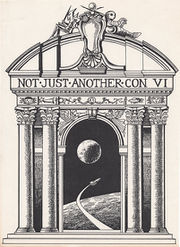 cover of the 1986 program book, artist is Pyracantha, who was also a fan guest of honor.

Janet and Chris Morris were guests.

Judith Tar was one of the GoH. Another was Cortney Skinner.