It has the nickname: "KandyKon."

This is not the same con as Ivan Cook's All New Phoenix Comic, Star Trek and SF Film Con. 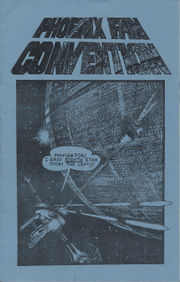 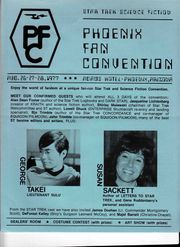 Movies shown: Dark Star, Forbidden Planet, Batman (the original), Tales from the Crypt, Seven Faces of Dr. Loa, The Day the Earth Stood Still, The Devil's Rain, and The Night of the Lepus. 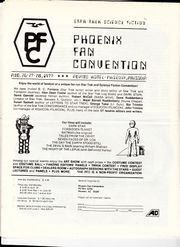 It lists three guests who were invited but did not attend: Robert McCall, Gene Roddenberry, and Majel Barrett. It does not list a guest who later attended: Walter Koenig.

For entertainment, there were also several short films from NASA, a reproduction of the transporter controls, favorite Star Trek episodes and a Kraith ceremony. Susan Sackett also brought a reel of the ST bloopers.

The Phoenix Pan Convention was held Aug. 26, 1977 at the Adams Hotel in Phoenix, Arizona. It was a very nice con, although rather on the small side. The guests were George Takei, DeForest Kelley, Susan Sackett, Alan Dean Poster, Shirley Maiewski, Jacqueline Lichtenburg, and several others. Registration took only a moment or two for those of us who had pre-registered. On the way to registration I bumped into Shirley Maiewski, a long time friend, who introduced me to Kathy and Polly Bayne, while we were standing in the registration line. I spent a great deal of the time that weekend with Shirley, Kathy, and Polly. After picking up my badge, I went to the Dealer's Room (re-named the K-7 Trading Post for the con) to wait for it to open. When it did, I went in to "poke around". One of the first things I bought was a "Grup" nude poster of Sulu, which sold pretty well during the con. However, the lady who sold them said you had to be at least 18 years old to buy them, and you did need some form of I.D. Friday night Susan Sackett spoke. She also brought some slides of the Enterprise under construction for next year's show. She said that the budget would be about $400,000.00 per episode. There would be 3 new characters, 2 male and 1 female. There would be art work in the corridors of the ship, plus many other items too numerous to mention. Alan Dean Poster also spoke on Friday night. He talked of Star Trek (he's written an episode for the new series), and Star Wars. Saturday I went shopping with Shirley, after which we went back to the hotel. Shirley went to see "The Devil's Rain" and then to a panel talk session she was on, while I went back to the Dealer's Room to meet some At 1:45 p.m., there was a Hosato club meeting in Kathy Bayne's room. For those of you who don't know, Hosato is George's other official club, and Kathy is the president. We had about 10-15 people there, including George, who was adorable in his bare feet. We had a lovely time, George — Thank You. At 6:30 that evening George and DeForest Kelley had a panel session in the main ballroom. It was informative and fun. They discussed, very generally, their contract negotiations with Paramount and some of the things they would like to see on the show. One girl asked George, "George, how many children do you have that you know of?" This caused George to laugh hysterically. When he calmed down a hit, George replied, "I'm in total ignorance!" Another lady asked DeForest about his name, to which he replied that he was named after a doctor in his home town. After the panel, Kathy, Polly, and I went to see the costume call, and walked in just when they were getting ready to hand out the awards. A Chewbacca won first place, and well deserved too. Second place went to a minotaur, and third place to a girl on "Shore Leave". After this, Kathy, Polly, and I went to a well deserved dinner. Sunday while having breakfast with some friends Susan Sackett came over to us and asked if she could join us. She did, and we had quite a gab session, talking about everything under the sun. After breakfast, I went to listen to George's speech, which covered a lot of the same area that was covered in his earlier panel session with DeForest Kelley.

Unfortunately, it was then on to the bus and back to Los Angeles but accompanied with many pleasant memories. [1]