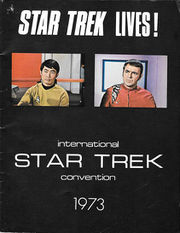 cover of the program guide for the 1973 convention 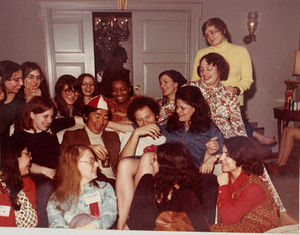 The highlight of the second con, called the International Star Trek Convention, was the unannounced appearance of Leonard Nimoy that Sunday. I was on hand as a helper (unpaid volunteer) and, along with future comics writer Paul Kupperberg, was part of the flying V-formation of security to get Nimoy from the entrance to the stage. We then stood in position to form a human wall between shrieking fans and a smiling actor.

Anticipating between 5,000 to 6,000 fans, the organizers were pleasantly surprised with a total head count of 6,200. That same year, Bjo Trimble organized The Star Trek West Coast Convention as a part of her Equicon event, which she had started two years earlier. [1]

This con was chaired by Al Schuster.

From the program book: "Star Trek Lives -- Again. And I can hear you all mumbling to yourselves - why? Why go through all the stomach-churning, headache-making, planning, calling, writing, meeting, listing, form-revising, envelope-stuffing chaos again? Because we had a ball, that's why! So did the over 3,000 people who attended last year's convention, who became infected with the same lovable lunacy right along with us. Love what it's all about and where it's at -- that loving is not something to be ashamed of -- it's something to shout about."

The fan play, One Cube or Two?, was performed at this con.

Badges, Flyers, and Other Ephemera

Joan Winston writing in the Star Trek Lives! (convention)/1974 program book, which was described as an excerpt from the "soon to be published "Star Trek Fan Phenomenon" by Jacqueline Lichtenberg, Sondra Marshak, and Myrna Culbreath, the book that was to be eventually titled Star Trek Lives!:

"George Takei and James Doohan walking through the halls of the Commodore and the awed and adoring glances that followed them. That was the first day, by Saturday it was George and Jimmy and it was heavenly.

The frantic fluttering in the Art Show as Devra took down the KROYKA sigh (well, it was the only thing that worked!) and the crowds of buyers and browsers streamed inside. David Gerrold trying to tell fans how to make a tribble while eating his way through the biggest pastrami on rye I ever saw. The fan cursing the dead batteries in her tape recorder as Jimmy Doohan strolled by singing a Scottish air. I feel for you, Sharon. The constant cry of "Where's Al?" and the constant answer "At the printers." So, what else is new?

A dozen people crowded into the Convention Suite stuffing all the paraphernalia into the 7,000 give-a-way bags, elbows and knees jabbing and poking various portions of your neighbor's anatomy. Watch that. Buster. The 2:00AM bull sessions in the Convention Suite with D. C, George, Jimmy and Hal. Grand. The 4:00AM bull sessions deciding on the film schedule for the next day. Blech. The changes that somehow always took place the next morning. Double blech.

The Committee's feelings as we stood on the dais ready to lock arms and die in a good cause as Jimmy announced Leonard Nimoy. Have you ever seen 5,000 people surge forward? Towards you? Definitely unsettling. Jimmy saved the day, though. "Take one more step and our guest will leave without saying a word." 5,000 people suddenly looked like Lot's wife. Rah, Jimmy. Leonard Nimoy. That was a surprise. And they say women can't keep secrets. Some friends still haven't forgiven us. "No, dear, you did not see Mr. Spock in the lobby. That was a fignewton of your imagination." After his speech, we spirited Leonard out of the Ballroom, down the back stairs and out of the lobby to get a cab. A host of fans coming out of the Howard Johnson's across the street spotted him and the shriek of "Spooocck" split the 42nd Street air. The cab took off as two trucks and a crosstown bus slewed across the icy street trying not to hit the hysterical fans.

The fans in the hotel would not believe that Leonard had left; they even cased the Ladies Room. Some of them started yelling for "Captain Kirk." We tried to explain that Mr. Shatner was doing a film. They would not take no for an answer. We finally said we were letting him down on a rope from the balcony. 5,000 fans looked up.

What an ovation Mark Lenard received when Dana introduced him at the Costume Call. Little did he know that playing Spock's father would make him immortal.

Monday night it was all over and the committee sprawled over any available surface just catching its collective breaths. What a convention! Yeah. Hey, what are we going to do to top it next year? Next year?"

A few years later she summarized the 1973 convention in her essay So you want to have a "Star Trek" convention:

"This time we'd be smarter. We'd really plan ahead. We chose a larger hotel, our beloved Commodore, and made arrangements for a six-to-eight-thousand-fan con. We got two of the stars of the show to come, and that was the first con that James Doohan and George Takei attended.

Over 7,000 attended that con of 1973 and they got more than they or we bargained for: the legendary "Mr. Spock" made an appearance. He happened to be in town and asked if he

could come over and meet the fans. Well, would you have said no? ""

"“I attended my Star Trek convention in 1973 and they were three to four days long over a holiday weekend,...They had a talent show where people got up and read poetry, sang songs and other things. I used to do a Star Trek stand-up routine in all the voices during lunchtime at high school. My friend told me that I should do that same routine.” Read the full article here.[3]

I have lots of [stories] from the original Febcons, dating back to my first, in 1973 (which was the second con). I arrived at the Commodore hotel with $10 and a return LIRR train ticket in my pocket. Membership at the door was $5. I bought the original Concordance from Bjo for $3.50, and spent the rest on food for the weekend. My friend with the hotel room left Sunday, so I crashed with strangers Sunday night (and it was no problem finding someone). I remember seeing Mike McMasters' full scale bridge, and was disappointed I didn't have the money to get my picture taken sitting in the Captain's chair.

A bunch of Febcon committee and staff became good friends through the years, and I thank them for putting in the effort that putting on a con entails. I know, I've run my share myself.

By the way, a few years later, after the Commodore went out of business they were holding a sale of the fixtures while I was visiting NYC. I'm the proud owner of a Commodore Hotel Bellman's outfit, a last memory of the Febcons. [4]