The Committee that organized the first New York convention in 1972 each earned $92.46 after all the expenses were covered. They were enthusiastic about trying again and took the hard-learned lessons to heart. They needed more space and for the 1973 convention headed uptown to the Commodore Hotel, adjacent to Grand Central Station. The show moved from January to Presidents’ Day weekend in February, where it remained through 1976.

In her innocence, The Committee’s Elyse Rosenstein (nee Pines) wrote to the original cast, inviting them to attend. Doohan and Takei accepted, as did author Gerrold. There was a more expanded trivia contest and a masquerade. Two fans from Poughkeepsie, Art Burmaghim and Mike McMaster, had spent the previous two years building a bridge replica and spent countless hours reassembling it as part of the show. Jeff Maynard, who went on to a successful career in film, began his annual slide and multimedia shows. The legendary Phil Seuling, who ran the most successful New York Comic Conventions of the time, was in charge of the packed dealers’ room, featuring a growing selection of Star Trek merchandise, from glossy stills to tribbles. Programming included episodes of television shows starring the cast or written by members of the staff, and Katz was back, this time teasing Roddenberry’s latest project, CBS’s Genesis II. [1]

Devra Langsam, a member of The Committee, wrote about this con extensively in Star Trek Convention, or, how I spent my vacation, or What would I have done for aggravation if I hadn't been helping run a convention?. See that page for descriptions of the drink "Pon Farr," listening to an fan-made obscene audio tape at a room party with Dorothy Fontana, the ebb and flow of food, Hal Clement and a naked Spock fan art on a lampshade, and more.

Badges, Flyers, and Other Ephemera 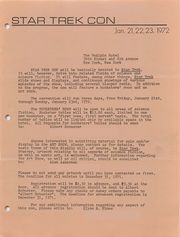 flyer for the 1972 convention

[Joan Winston wrote about the first convention in her 1977 Starlog essay So you want to have a "Star Trek" convention]: "We started our planning about seven months prior to the January 1972 date. For the following cons we gave ourselves two weeks to recover from the previous one (most times that was not enough) and dived right into meetings and decisions for the next. That gave us eleven and a half months for all those monthly, then bi-weekly, then weekly meetings. This, of course, did not count all the meetings in our Chairman's print shop when, after a session of addressing, pasting, folding, and zip coding progress reports, you could see the sun rise over the printing presses."

The 1972 con was a roaring success. We cleared something like ninety-odd dollars each after all the expenses were paid. That was great, because most cons lost money or just managed to break even. This was before certain people decided they could make a fortune putting on Star Trek conventions.

Of all the cons we gave, I think this first was my favorite. Next is the 1976 one with the others falling into a kind of middle ground. Perhaps because both the first and the last con were loaded with Love with a capital "L." In 1972, we didn't know what we were getting ourselves into, and in 1976, we knew it was the last one and we could relax at the end of a long hard road."

Anthea, who was young fan at the time, recorded her memories decades later on September 27, 2010:

"My family and I jumped on the subway and breathlessly raced down to the westside of Manhattan. At the hotel the convention staff stamped our hand with an ink ‘tattoo’ and we rode the escalator to the second-floor ballroom. The place was packed. Then an unexpected party-pooper ruined everything—the fire marshall of the FDNY announced it was over capacity and thus a fire hazard and some people would have to leave. The FDNY proceeded to kick people out and a small riot broke out. Meanwhile, in the confusion of the combative crowd I ran into a school friend of mine. We both had our 35mm Pentax SLR cameras around our necks. He and I stood at the top of the escalator and watched a fireman trying to single-handedly control a bunch of angry Trekkies in the lobby. “A riot always makes a good shot,” he said, as he snapped picture after picture of flailing arms and bulging eyeballs in the crowd. Once the riot had subsided it was time to enjoy the convention. There were a few tables selling Star Trek memorabilia scattered around the room. My mother complained it was mostly junk, but yet she still bought a pair of rubber Spock ears. And she was right, it was junk. The damn Spock ears were impossible to get over your ears. There were people walking around dressed in full make-up and costume of various alien characters from the TV show." Read the full review here. [2]

"I was not at Woodstock. But I was at that very first Star Trek Convention in 1972. Really. Honest! I don't recall how I even knew about it – probably from TV commercials I'd have seen during Channel 11's week-nightly Star Trek reruns in New York. Which means I probably didn't even hear about the convention until I came home for my college winter break a month before the convention would happen on January 21-23 in Manhattan. Luckily, my Christmas vacation included that weekend, and I decided I could not miss this event. I mean, it would probably be the one and only Star Trek convention ever held, right?

Since I lived on Long Island, I was just a 45-minute train ride from the city. And the convention would be at the mid-town Statler Hilton Hotel, across the street from the Long Island Railroad terminal at Penn Station. So getting there would be easy. But who'd go with me? Nobody, as it turned out. By the time that weekend rolled around, most of my friends were already back at school or not interested. Well, dammit, Jim! I wasn’t going to miss it, even if I had to go by myself – which I did on Sunday, the convention’s final day. By that time, the committee had famously run out of badges – and space: they’d expected a few hundred fans and stopped counting at around 3,000!

I think the con was on the hotel’s 18th floor, and Star Trek fans filled every square inch up there. I made one round of the dealers’ room, which was packed like a rush-hour subway train. As for the ballroom where the guests spoke and films were shown, I’m sure I never got a seat through the hours of listening to Gene Roddenberry and Isaac Asimov, and watching the infamous blooper reel (which was hilarious, and the first time I’d seen anything like that).

My specific memories of that day are fairly hazy, and influenced by reading accounts of the convention in TV Guide and books by the late Joan Winston, a funny lady who helped run all five original New York Trek cons and was a welcome fixture in fandom for decades after."[3]