Myrna Culbreath (born 1 June 1938) was an early Star Trek fan. Before becoming involved with Sondra Marshak she was the owner and founder of The Culbreath School, a private academy in Colorado. She communicated frequently with Marshak, who then lived in Baton Rouge, concerning Star Trek. As Marshak did not feel comfortable with written correspondence and long-distance telephone charges were astronomical in those days, she persuaded Culbreath to sell her school and move in with her. 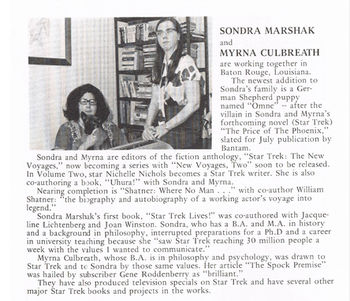 a 1977 photo printed in the 3rd Space-Con program book, it portrays Culbreath and her writing partner, Sondra Marshak

She also co-wrote and edited some commercial Star Trek books such as the early collection Star Trek: The New Voyages. With her writing partner, Marshak, she wrote four professionally published Star Trek novels, The Price of the Phoenix and The Fate of the Phoenix (for Bantam Books) and The Prometheus Design and Triangle (for Pocket Books). The pair also had a couple of stories in the New Voyages collections of short stories that many fans felt were the closest fandom ever came to professionally published slash.

In the anthology Star Trek: The New Voyages 2, Culbreath and Marshak announced plans to write a novel with Nichelle Nichols, to be called Uhura!. This book was also referred to as The Uhura Connection. They claim that getting started on this book "set her and us off on a NASA trek which helped to shape not only Uhura! but this New Voyages, with its NASA connection." (One of the stories in New Voyages 2 was written by NASA engineer Jesco von Puttkamer.) According to Ian McLean, of the website Have Phaser, Will Travel, "the book would have been a mix of fact and fiction about Nichols and Uhura, with Uhura exploring the life of her ancestor, Nichols, who had worked with NASA, among other things." (In the 1970s, Nichols worked with NASA to recruit astronauts from minority groups.) Marshak and Culbreath also planned a book called Mr. Spock's Guide to the Planet Vulcan (circa 1979), according to the "About the Authors" note in The Fate of the Phoenix. [1]

Culbreath was also the author of the libertarian/Star Trek zine, The Fire Bringer.

According to her account in Jeff Ayers' Star Trek: Voyages of the Imagination, she made a number of attempts at writing a Star Trek episode spec script, with Roddenberry's encouragement. Her preferred title for the script was "Triangle." Once renewal of the television series proved unlikely, Roddenberry introduced Culbreath to fan writer Jacqueline Lichtenberg, who then introduced Culbreath to Sondra Marshak.[2]

Today, Culbreath has returned to education. She is the developer of PhonicsOpoly, The Phonics Game, and other games designed to teach children to read through phonics.[3][4][5] Other than appearances on the Zoh Hieronimus podcast Future Talk in 2004, where she was introduced as a well-known television and radio host (she explained she had frequently "substituted for a nationally syndicated radio host," but did not mention for whom)[6], Myrna Culbreath has not given any interviews or published any new fiction under that name.

From the TreKon 1977 program book:

Sondra Marshak and Myrna Culbreath have that rare fortune most STAR TREK fans only dream about; not only are they the authors and editors of several well-known books in the field, they are also personal friends o( many of those who helped make that dream real to twenty million ardent fans across the U.S.A. Sondra and Myrna have been working together for the past three years and their accomplishments stand on their own merits: STAR TREK LIVES!; STAR TREK: THE NEW VOYAGES volumes one and two; a new STAR TREK novel PRICE OF THE PHOENIX; UHURA!,c o-authored with Nichelle Nichols; the long-awaited SHATNER: WHERE NO MAN... "the biography and autobiography of a working actor's encounter with legend". The list goes on and on.

A typical 36 (or is it 37?) hour day for the team might include amending the official Washington, D.C. reception to honor Nichelle and her company's NASA contract, to assist in intergrathg the astronaunt corps; being asked to write the back cover notes for William Shatner's magnificient new double album set SHATNER LIVE; or writing a STAR TREK novel or two-and getting paid for it; or a luncheon interview with Wiliiam Shatner and Leonard Nimoy, "Kirk meets Spock" for SHATNER: WHERE NO MAN...

And in between all of that, squeezing in 10-15 pages of writing a day... every day. In Sondra's own words- "The working conditions are just... not to be believed." Myrna now lives a few blocks from the Marshaks' Baton Rouge home where Sondra and husband Alan live with their son of five, Jerry, and Sondra's mother, Mrs. Anna Tornheim Hassan -"Mama" to the world of STAR TREK. The latest member of the family is a German Shepherd puppy, "Omna" [sic] - named for the villian in their novel, PRICE OF THE PHOENIX [7] . Omna [sic] lives—and prospers—having turned into a horse while no one was looking-on a diet of straight pins, telephone wires, trees, and the seat of Sondra's favorite recliner.

The two have been heard to say, "Maybe we shouldn't have named him for the villain!"

Culbreath was a member of the Young Americans for Freedom, a conservative/Libertarian youth activist group, in the late 1960s. Libertarian organizer Gene Berkman, owner of Renaissance Books in Riverside, California, remembers:

Going back a couple of years, the Vietnam War was the major factor in causing the creation of the Libertarian Caucus in Young Americans for Freedom at the 1969 National Convention. Legalizing marijuana was the other important issue we had with the YAF conservatives.

I was working for SIL [International Libertarian Solidarity] when Dave Nolan started the Committee to Organize a Libertarian Party, in protest over Nixon's imposition of Wage & Price Controls. In his initial draft platform for the LP, Nolan called for withdrawal from Vietnam.

Unfortunately, Myrna Culbreath denounced the idea of surrendering in Vietnam, and urged more bombing. She basically filibustered until the delegates deleted any reference to Vietnam in the platform. She then dropped out of the LP altogether.[8]