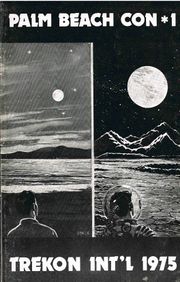 front cover of the program book, “Today and Tomorrow” by C.C. Beck 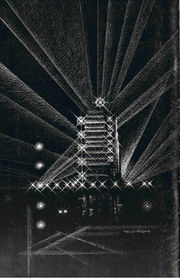 back cover of the program book, “Night Before Launch” by Frank Kelly Freas

The cover was a painting called “Today and Tomorrow” by C.C. Beck, the back cover was “Night Before Launch” by Frank Kelly Freas.

There was film room, an amateur film contest, an art show, a costume contest, auctions, dealers room, guests speakers, and a handful of panels.

We got to the hotel around seven on the 28th. The Con suite was to be ready for us that night so we could set up the next morning with no trouble. The people at the desk acted as though they never heard of us and the the person in charge of conventions had left for the day. The room wouldn’t be ready until the next day- about that time the owner of the hotel happened to come in and he knew one of the con committee members and came over to see what was up. Once he learned what had happened he got us another room for the night. We get everything in the room which included three 16mm projectors, a ton of 16mm films, program books, awards, badges, and so on. We all decided we were going to watch the Wizard of OZ - we had a NEW print of it for the con and we knew none of us would have a chance of seeing it when it was screened.

7AM we get our stuff and get ready to setup and we find out that there is another convention in the hotel and they have some of our space. We need to be ready for registration by five PM and people would be getting in all day and we had to reallocate the rooms. Only two rooms were effected - but one was our dealers room - which meant moving the dealers room to a smaller room with two other smaller rooms. (Luckily two dealers from New York wanted one of the smaller rooms to split between them and it made the other room work out just right). We lucked out that George Takei and Noel Neil were on the same plane - so we had only one trip to the airport. Most of the other guest lived in Florida. By the end of the night all our guest are in and most of the dealers and we were starting to get in people who were staying at the hotel to make sure they would be there bright and early for the opening of the con. The elevator to the con suite acts like it may die at any time.

7 AM Saturday Morning - DAY ONE - we are at go! We open the registration at 9 AM and the crowd begins. By 10 we have the official opening. Then the day gets crazy. It seems no one on the con committee gets any free time - problem solving becomes an art. We hold our committee meeting at around 1 AM, so we would be ready for the next day (HA).

The rest of the con was a whiz of things happening - Noel Neil almost getting hit by the movie screen in the Grand Ball room when it fell - George being bed by another guest at the con expense when we needed him for a TV appearance - a newspaper report that was done by a reporter who only saw a painting of a topless mermaid in the art show...

When it was all over we broke even!! (Which was all we wanted) and I think everyone at the con had fun...and we were tired.... [1]