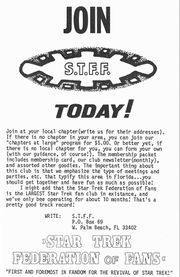 Join at your local chapter (write us for their addresses). If there is no chapter in your area, you can join our "chapters at large" program for $5.00, Or better yet, if there is no local chapter for you, you can form your own (with our guidance, of course!). The membership packet includes membership card, our club newsletter (monthly), and assorted other goodies. The important thing about this club is that we emphasize the type of meetings and parties, etc. that typify this area in Florida...you should get together and have fun as much, as possible!

I might add that the Star Trek Federation of Fans is the LARGEST Star Trek fan club in existance, and we've only been operating for about 10 months! That's a pretty good track record!

This chapter was headed by Rick Coy, had 700 members in 1976, and was founded in October 1975. It sponsored the Palm Beach Con.

During this time I became a member of the local Star Trek club, Star Fan United. Shortly after joining it severed ties with STFU and became Star Trek Federation of Fans. This was a lot of fun, but like a lot of things we grew until we were too big for ourselves. I became secretary/Treasurer of the clubs national chapter. We held several one day mini-cons in the West Palm Beach area and one large multi day con called Palm Beach Con I/Trekon International 1975. (Yes we were the first to use the term TREKON for a STAR TREK CON). As guest we had George Takei - Sulu, who brought with him a blooper reel. (Now remember in 1975 there was only Classic Trek - the first movie was still several years in the future and not even planned at this time - also home movies at the time were on 8mm film or if you were lucky 16mm - so bloopers on DVD’s and Video Tape were also a thing of the future.) Noel Neil - Lois Lane in both the Superman TV series with George Reeves and the Kirk Allen Superman serials, C. C. Beck creator of Capt. Marvel (Shazam). [2]

This chapter was headed by J.W. Reitz Union, had 40 members, was founded in April 1974, and had a focus of 23rd century philosophies, "especially Vulcan."

Some History from an Unknown Newsletter

We have plenty of good news to report about this issue, and we'll begin with an item that should be of great intrest to all South Florida Star Trek fans and many more throughout the country. For some time now, the people at the top have seen it coming, and now it has happened: due largely to disagreements over how and by whom it should be run, the Star Trek Federation of Fans has ceased to be. This, however, does not mean the end, but rather the beginning of a second generation of fan club, a club more accutely aware of the special problems which crop up in each area of a different chapter or group. Out of the afore mentioned ashes, not one, but three phoenixes have risen. These organizations are Star Trek Fans of Florida, formerly the Palm Beach area STFF branch, the Interplanetary Trekkin' Terrans, formerly the South Broward County STFF, and of most intrest to fans in this area, as well as several others, the Star Trek United Federation of Fans, which used to be the Miami chapter of the old STFF. Miami is still, to the best of our knowledge, the largest single chapter of any ST club in the country and has active chapters of STUFF in Broward county, Naples, St. Petersburgh, New York City, and San Antonio, with even more expansion in the foreseeable future. [3]