Age of Sail is an umbrella fandom linking together several smaller fandoms, (Horatio Hornblower, Aubrey-Maturin, Sharpe, Jane Austen, Georgette Heyer, Temeraire, Pirates of the Caribbean, Black Sails, The Terror, Our Flag Means Death) which, although they do not share characters, (other than historical personages) have in common a focus on shipboard life, or a setting in early nineteenth-century Europe.

As a historical era name, "Age of Sail" can refer to a period lasting from the 16th Century to the widespread adoption of steam ships and to any location, but most Age of Sail fandoms are based on works set in England or Anglophone locations between the early 18th and early 19th centuries (taking in the period from the Golden Age of Piracy to the end of the Napoleonic Wars).

Due to its historical flavour, Age of Sail fandom has a lot of crossovers. Many people are active in (or at least familiar with) more than one age of sail fandom, and write fic or create fanworks that bring in characters, events, or ideas from more than one canon source. For instance, there have been fanworks where Archie Kennedy from Hornblower is saved from death by Stephen Maturin from Master and Commander (for example, in Thunder Overhead[1] by latin_cat or Just Like Honey[2] by VelveteenThestral), or where he sails with Captain Jack Sparrow from Pirates of the Caribbean.[citation needed] There are also fics where a character from one Age of Sail canon witnesses events depicted in another Age of Sail canon, for example in The Other Side of the Medal[3] by Sarlania in which Horatio Hornblower witnesses an event told in Patrick O'Brian's book The Reverse of the Medal, part of the Aubreyad book series.

Because most seafaring fandoms have a dearth of female characters, writers of Age of Sail het fic may use Mary-Sues or other Original female characters. Cross-dressing midshipmen (i.e. a girl disguised as a boy to go to sea) are a common trope, especially among younger writers. 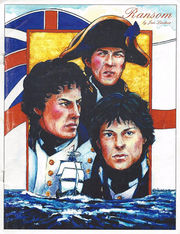 Communities and other online resources

The LiveJournal community anything_aos and the Dreamwidth community age_of_sail are both general-purpose communities for all age of sail fandom discussion.

The LJ community kiss_me_hardy is a fannish research community, for people to ask questions about historical details for their fic etc. (It was most active 2004-2007; as of 2009, it is largely defunct.)

Age of Sail fandoms have their own newsletter community despatches.