From Fanlore
(Redirected from Hornblower)
Jump to navigation Jump to search

Horatio Hornblower (part of Age of Sail umbrella fandom) begins as a midshipman [1] (basically, an apprentice officer) in the Royal Navy, and over the course of the series participates in many of the wars Britain fought with Spain, France, some hijinks with the Ottoman Empire, and... okay, usually France. As he advances through the ranks and proves himself with cleverness, leadership, and tactical skill, Hornblower sheds his insecurity and becomes a more and more important officer in the Navy.

Interestingly, the novel series depicts Hornblower as funnylooking: tall, knobbby-kneed, and physically awkward despite reasonable fighting prowess. As played by Ioan Gruffudd in the TV series, "funnylooking" is not quite the right word.

Hornblower is a fandom which falls under the umbrella fandom Age of Sail, or AoS.

The story of Horatio Hornblower was originally told in novels and short stories by C. S. Forester. These stories are classic "boys' adventure" stories. A TV series mini-series based on Hornblower's early adventures was made in the 1990s, with followup mini-series through to 2003.

The books and TV series differ considerably in content and in fan following. Specifically, the TV series introduces a sidekick character, Archie Kennedy (played by Jamie Bamber), who existed in only a single sentence in the books. Archie's fate inspired a common AU trope in the fandom.

Horatio/Archie is the primary slash pairing among those who follow the TV series, while Horatio/William Bush (Hornblower's second in command later in the series) is the primary slash pairing among fans of the books. Despite this split, Hornblower slash fandom is still reasonably cohesive, with people participating in shared fannish activities regardless of whether they prefer "bookverse" or "movieverse".

As an Age of Sail fandom, Hornblower has often been part of crossovers with such fandoms as Aubrey-Maturin, Pirates of the Caribbean, Sharpe, and Georgette Heyer.

Stories have been written in this fandom for Yuletide.

The Hornblower fan forum Horatians had a DNS attack in April 2011[2], which necessitated a server move and meant that they lost all posts (although login information was saved). Popular discussions on the site include such topics as "Was Captain Sawyer pushed, or did he fall?" - referring to a specific scene in the Hornblower TV episode Mutiny. 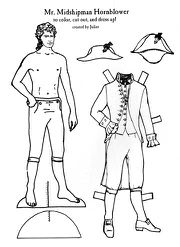