Hornblower and the Spanish Doctor 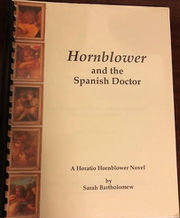 cover of the official printing 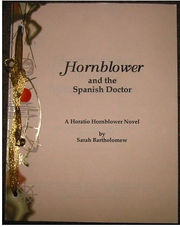 a homemade cover that a fan made for their copy, one which they likely photocopied

Hornblower and the Spanish Doctor is a gen Horatio Hornblower 88-page (54844 words) novel by Sarah Bartholomew.

"Author's note: This story arose from a discussion on the mailing list in which I stated that I did not care for Dr. Hepplewhite and wanted another doctor on the ship. I introduced the 'new' doctor in this story, and he is also found in my Christmas fic, To Hear the Angels Sing." [1]

Oh, this was lovely. Beautifully paced, really good plot and oh, Archie! You captured them all really wall, lovely job. [2]

Gosh, this is so well-done, so emotional and good! A heck of a read. Thanks for writing it. [4]

This is perfect. I'm actually going to bother quoting my favourite parts because I adore this so much. The tone was so in touch. And just. Perfect.

"With a quiet groan, Horatio leaned forward and ran both hands through his hair, then leaned his head into them, feeling utterly defeated. He could hear the conversation now: So, Mr. Hornblower, how did the mission go? Oh, splendidly, sir, as you can see we're many hours delayed and soaked to the bone, oh and don't mind Mr. Kennedy, yes he is being brought up on a stretcher and if anyone happens to mention it he did end up going insane with a fever I knew about many hours beforehand. Oh, why is he unconscious? Well, it seems he had a severe attack after drinking some tonic and collapsing but it's all right, the Valiant's doctor stepped in and saved him, Lord knows I was pretty much useless at that point, and lucky me I have not one, but *two* captains who are now aware of it! So yes, a very successful mission, now if you'll pardon me I'm going to my quarters to hang myself..."

This is, quite simply, one of the best things I've ever read. I laughed so hard oh my god and I can actually hear Horatio saying it (as with every line in this story).

I did say favourite parts, however I truly think this sums it up in one!

Have I mentioned before how perfect this whole thing is? [5]