Some Facts About the 2007 Convention 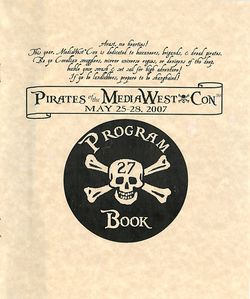 The skit that year was a Harry Potter and the Goblet of Fire skit set to music from Man of La Mancha. It was written by Bev Grant & Mitch Leigh and called "Goblet Survivor." See AuntieC's "Goblet Fire Skit" Flickr Album, Archived version

Yum@ was the Fan Fund winner that year.

A complete list of winners, with photos can be seen at MediaWest*Con 2007, Archived version.

A complete list of winners, with photos can be seen at MediaWest*Con 2007, Archived version. A few sample doors are included below.

"The Art Auction is always fun. This year one of the biggest jokes was one of the male auctioneers looking at the picture he was supposed to shill and saying, “In 27 years of doing this, finally…a het picture!”

We all laughed as of course the explicit pics all tend to be slash and they always give them to the male auctioneers.  ;) So this Han/Leia picture was quite the exception. Unfortunately for het fans, it didn’t get much bidding at all, and one of the female auctioneers said, “A Leah Rosenthal cartoon gets $500 and the Han/Leia (named a smaller number I can’t remember). No wonder this show doesn’t have het!” Laughter.

One woman dropped $1100 for a drawing of Jack Sparrow from Pirates of the Caribbean. Good luck to her! Even if I had the money I wouldn’t spend it that way, but to each her own. It’s fun to watch the bidding and everyone has a good time."[3] 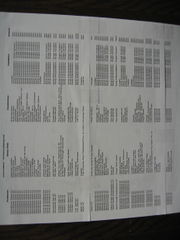 Starting in 2007, the Award Winners were only announced in the Final Progress Report, but not until the following year. However, an attendee did pull together the playlist of vids for that had been submitted to the show. Thanks to cannellfan for the list and the photo. Winners are highlighted in bold.

"It was quite an experience! When I got there people were exiting the room complaining that they couldn’t take another Supernatural vid! Seems there were so many vids of that show that people were getting glassy-eyed. Even the fans of the show had had enough! So the hot fandom this year saturated the video room. I did see a few non-Supernatural vids: one lovely one of The Ghost And Mrs. Muir (TV version) and a tribute to the deceased Edward Mulhare (Captain Gregg on the aforementioned series).

Unfortunately a policy was made about five years ago that now slash and mature vids are screened late at night the first time around. I wasn’t about to stay up ‘til two in the morning for them and since I’d heard they would be screened at 9 the next night, I went to bed a little after midnight.

It’s a curious policy. Slash vids don’t have anything explicit in them at all since TV shows don’t show their leads as gay, except for shows like Queer As Folk on Showtime. We don’t even see kisses, yet het vids can show lots of skin and be hot ‘n’ heavy and are shown earlier in the evening. I believe I’d heard that the policy was instituted due to a kid wandering in the video room years ago and seeing a slash vid and someone got upset. Who knows? It just tends to irk me."[4]

"I went down to see the slash videos showing at 9:00. They started out with last year’s that included an incredibly beautiful Lord of the Rings. There was also an excellent Bodie/Doyle. This year’s slash vids concentrated on Lord of the Rings again and was long and beautiful. Also a stunning Horatio/Archie vid from Horatio Hornblower that got me a little misty. There was a Supernatural video here, too, the concept of which doesn’t bother me in the least. J There was a Sentinel vid and Magnificent Seven offerings and all were very well done. There was a video of a British cop show that I didn’t recognize but the pairing was cute, and then an absolutely adorable Hiro/Ando vid from Heroes! So I’d say we had small quantity this year but excellent quality."[5]

GEN VIDS IN COMPETITION - BY CREATOR

Thanks to Alem for running the Door Decoration Competition.

Thanks to the producers of The Dork of the Rings.

Thanks also to Jeff Walker for the movie trailers and studio promotion freebies.

(I say Trek only because there are now officially eight robrilliam fandoms out there, and they were all well represented at Mediawest, yes, all fandoms were WELL REPRESENTED but one, and that one is this one, sad to say.) The single pitiful little Trek panel was entitled "On the Future of Star Trek", and I was a co-host or co-facilitator or something. At any rate, I got to sit up front and drink water from a glass.

So how did the "The Future of Star Trek" panel go? You inquire, I know you do. It was okay. There's no future for "Star Trek" if the panel is any indication, but, other than that, it was okay.

The first thing that happened was SO FAN-ny!!! A bunch of folks started ragging (rather gently) Berman, Braga, and "Enterprise". This caused one woman to stand up and intensely announce she was walking out of our little lame-ass "Enterprise"-dogging panel, and then she walked out. I made all these little "But I love `Enterprise'" noises, but no dice: out she went.

And then it got a little more contentious.

I would say there were between 25 and 30 people there, and the majority wanted to talk about the new alleged "Trek Movie" and casting and profits and stuff. (But I didn't want to. I don't think "Trek's" future is in movies; I don't even think the future of movies is in movies.) Anyways, the crowd was torn over loving Matt Damon and Adrian Brody as Kirk and Spock and not loving them. All I have to say is I saw it coming. The night Adrian Brody won his Oscar? I had flashed to F. Murray Abraham, and I immediately knew that, at some time in his future, Adrian Brody would play an alien on "Star Trek". (But you know who would make a great Spock! This is such an irresistible game! Sacha Baron Cohen's got my vote! YES! A great and groovilioius sexytime Spock! He could do it! People would rise from their graves to see THAT "Star Trek"!)

And that was pretty much the panel, which was ultimately not very future-y at all.

But here are my post-panel thoughts: Thought A): Islahope and Liz Ellington were there with me, and we all three got off in a corner and decided if "Star Trek" had had a real future, it should have been "Firefly". Thought B): "Star Trek" is a mirror of society, isn't it? But it's mostly a mirror of the person watching it, and a lot of people at the panel (myself included) were pissed off because nobody saw the same thing in the mirror as they did. Or he/she did. Or whatever. Thought C): The next night I went to a party for fans who are Democrats. (Can I still say that kind of thing on ASCEM? Back in my day, ASCEM was a stinkin commie rat hidey-hole and we were happy with it. One never knows how things are going to turn out, though.) That was a great party! Muy compatibility galore! YOU should have been there!!!! I fell into conversation with a young woman, and we talked about becoming fans of this and that. She said that one reason she had become a fan (she was into "Star Wars") was because of the very disturbing political trend America was taking, but it was little easier to become a fan than to go to Canada. That comment got me to studying things over, and you know what I think: I think "Star Trek" is a reflection of fat times. TOS and TNG (and they're the only Treks that matter in terms of broad cultural interaction) came to us in fat times, when it seemed as if we were headed towards a good future. The Federation is a big, fine, all-inclusive, hand-clappin, social-workin entity with room for all! But that's not our future anymore, if we can even be said to have a future. So, yup, "Star Trek" is a mirror of society, and, until we get our future back, "Star Trek" won't have a future, is my call and I'm sticking to it. Thought D) Hey, guess what! Word on the rialto is that there's going to be a KiSCon 2008 in Los Angeles. KiSCON 2001 saved my life, so maybe there's a widdle teeny future, after all. But I'm sure we'll all hear more about that later. [7]

I will always go to spend time with my friends and to enjoy face to face discussions in the panels. It's the only time of the year I get to see some of my friends face to face. But I miss the number of people, the fun of the art auction, and just the overall con atmosphere that has been diminished, at least for me, for the past couple of years. I hate that the whole con is beginning to feel a bit like one big dead dog party. [8]