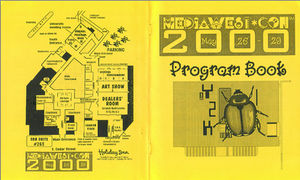 covers of the 2000 program book

Some Facts About the 2000 Convention

From the fourth progress report: "I want to thank everyone who nominated and voted for the 2000 Fan Q's. We had a pretty good mm out at the awards and most everyone had a good time. Thank you to my counting committee, I would never be able to get all the certificates printed by award time if you didn't help. It's amazing what good help you can get with a pizza bribe. We only had one lost certificate this year and for some reason it was a matter of being sent to the right address and just not delivered, it was returned and then resent — delivered and received. I hope everyone can convince even more people to get involved this year. There seems to be some awfully good 'zines out there and we don't want anyone deserving to be left out."

"Saturday night presentations will include The Sound of Reptiles, a Jurassic Park musical by Bev Grant, and Mudd's Follies, a Star Trek TOS play from the Monday Night Gang formerly known as the Monday Night Group That Meets on Sunday Afternoon. We are still looking for volunteers to man the MW'C video camera to tape the plays and Masquerade. MST3K: Every Satire Has a Beginning by Michael Emond & Jessica Ross will be performed 4pm Saturday in the Fannish Video Room."

News from the Zine Reading Room

Silent Bid Auction - There was an amazing array of stuff: T-shirts, books, music tapes, posters, and many other fannish collectibles... even a working word processor. Out of 77 times, 52 were sold. We started the con with a goodly array of items but many more came in during the con, some we couldn't get put out in time. Chief among these is a "Weapons Shop of Isher" lucite long-barreled pistol w/ power cell! These will be used to start next con's auction.

Thanks to those who came to the 'Zine Room at midnight Thursday to see what I was doing and stayed till 8 am Fri. to help me pull out all the 'zines to be deleted) and to all the GoFers who worked in the 'zine room (for the first time in 2 or 3 years we had enough GoFers for all the "regular hours"). Thank you, it truly could not be done without you.

There's good news and bad news in the 'Zine Room.

Good news: Phase 1 of the "zine room redo was completed with the deletion of over 300 "zines from the permanent loan collection. With a few new 'zines added this year, the collection now has 245 'zines covering 23 fandoms with a few more fandoms showing up in the 3 extra categories of Cross-overs, Fringe Fandoms and-Multi-Media 'zines. Almost half of the deleted 'zines were taken by Ming Wathne of the Fannish Archives to be used for its " loan-by-mail" program. Thanks to the con members who drove Ming (and over 100 lbs of 'zines!) to the post office. The remaining 'zines were put out in a box at the zine room door for #1 each or whatever donation the buyer wanted to make. The money was split 60-40 between the Fan Fund and the Fannish Archives for it's shipping costs. There were also 11 items in the silent bid auction for the Fannish Archives of which 9 sold.

Bad news: Only 2 people, making temporary loans of a total of 6 'zines, got in touch with me before the con and no-one at the con. I heard from only 1 (count'em, 1) Fan Q nominee and only 1 'zine seller took advantage of the zine room's Ad Service. This is a sad change from having 85% of the Fan-Q nominated items a few years ago. Even sadder, most of the above was only 1 person: Lisa Truant-Tan. Thank you Lisa for your input.

Good news: Readership was up considerably. Bad news, while there were enough GoFers this year to staff the 'Zine Room for "regular hours," there were still not enough GoFers to keep the room open past midnight (I had to "throw out" several people at Saturday closing time). Someone made the suggestion of asking late-night readers if they would be willing to volunteer an hour or two of their time to watch the 'Zine Room so that it could stay open past midnight for their reading pleasure. Comments anyone?

Phase 2 of the 'Zine Room redo will involve rewriting of all the file cards for the permanent loan 'zines to give more info on their contents. This will be started this winter with the minor part of the 'zines that I have info on. The rest will, hopefully, be finished at the con in May.

Finally, special thanks to Sian Slade and Andre Lieven who drove from Lansing to Grand Rapids to pick up the zines from their storage site, to Keith Gruenwald who delivered them back to storage, and to Kim Vanderlaan for storing the 'zines. — Jan Gosnell

Other gatherings: Bubble Blowing, Saturday in the courtyard, hosted by Linnese Dawe

A complete list of winners, with photos can be seen 2000 here.[3] A few sample doors are included below.

A partial playlist of the gen vid show was compiled by cannellfan. Not all slash vids were recorded and MediaWest*Con failed to announce the winning vidders in the slash category.

SLASH. All vids below were classified as Single Source Song Interpretation. The results of the Slash vid voting were not posted to the MediaWest*Con website.

"Talk Dirty to Me" Sentinel