Some Facts About the 1984 Convention 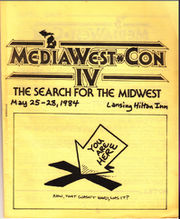 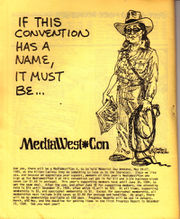 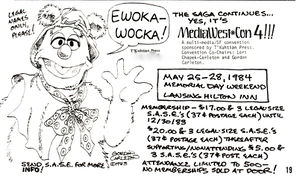 The con plays: the Datazine editors presented Star Trek in the style of "Mister Rogers." Nikki Cadwell wrote and coordinated "Trek Wars: A New Enterprise, or... No Hope." Joan Verba appeared in the play, "In Search of Spock" written by Carol Christensen (Reeg).

Some panels: "Fen vs. Mundanes," "Requirements for Hero in Fandom," "Accuracy in Fiction and Art," "In Defense of the Star Trek Welcommittee (Is it Obsolete?)", "British Media Fandom," "BEM-FIC: Writing Alien Characters," and "Japanimation"

Peggy and I arrived at the Lansing Hilton parking lot at 2:00 p.m., Friday, May 25th. We then sat in the car trying to decide whether or not to turn around and go home. Neither of us was sure we would "fit in" since this was our first fandom convention.

There were some other unexpected guests at the hotel this year (supposedly this will not happen again) who were causing some trouble in the hallways. After hearing some unpleasant remarks made to one of the con guests outside our door, we called Security and they immediately took care of the problem. What was neat was that a wonderful Luke Skywalker showed up at our door, so we really felt safe, though we wouldn't have minded Han or Dr. Jones being there, too—just in case. (You know, I wonder which would be faster—a lightsaber, a blaster or a trusty bullwhip?) We had a great time and we left for home the next day trying to figure out how we could manage to see IJATTOD again. We did manage on the way home. I mean, why get home early and have to fix dinner, right? The coordinators of this con did an excellent job of making everything run smoothly. If there were problems, we were not aware of them. Our only problem about returning next year is that Peggy is reluctant to attend with a much-awaited and longed-for six-month old nursing and, probably teething, baby on her hip. But, we'll see. A lot can happen between here and Lansing... [2]