Some Facts About the 1986 Convention 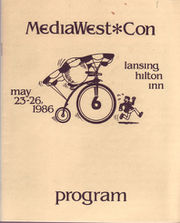 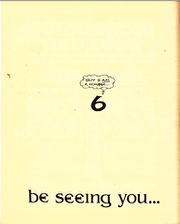 back cover of the 1986 program book 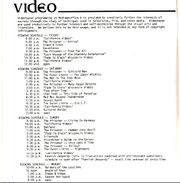 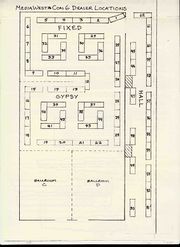 The fan skit was "Spied Nights." It was written by Paula Smith.

A Filk in Honor

In the 1986 issue of Southern Enclave #12, Cheree Cargill penned a filk song in honor of MediaWest*Con.

"In lieu of a con report, the following filk is offered in an attempt to sum up a weekend spent at MediaWest..."

THE BALLAD OF MEDIA WEST*CON by Cheree Cargill

Oh, Lord, won't you win me a Fan Q Award?
Worked hard on my fanzine, oh, so very hard.
I'm not a great artist and I'm not a bard,
But, oh, Lord, how I want just one Fan Q Award!

1986 convention T-shirt with a theme from The Prisoner

(to the tune of "Mercedes Benz" by Janis Joplin)

This "VICER" just came back from Mediawest which was in Lansing Michigan. There I hooked up with other "VICERS" for the very first time... Needless to say I had wonderful time. There I met [Susan H], [Lucy C], [Dani L], & [Mary P]. Mary & I roomed at the convention together. It was many long nights of Vice talk. We also met other fans that had an interest in Vice. We all got together for a Vice Party on Friday night to watch, what else, MIAMI VICE. It was fun. The art show was to die for. Mary & I walked away with what we feel [to be] the two best pieces of art in the show. Yes, the old check books were pretty low after that, but it was well worth every penny. We all had a great time. It was so much fun meeting and talking Miami Vice with others who enjoy the show as much as I do. [2]

A con that I was looking forward to very much was MEDIA WEST since I'd heard so very much about it. But I tell you folks, I was greatly disappointed - yes, they had a great art show, and yes, the dealers room was nice. But can you believe they only had a handful of K/S zines, one - which was mine and the other being NOME. Cathy from DATAZINE had others from the gals down LA way but that was all folks. I knew this and it still didn't stop me from buying my other media zines.

The kicker to this con was the unforgivable way they treated Star Trek. Star Trek was like a disease that no one wanted to talk about. I think the thing that pissed all us Trekkers off was the way in which they handled the Fan Q awards. Syn won for best Trek writer and the person who was handing out the awards didn't even mention the category or who won; she just said "Gee, we have a problem here; I don't know how to get this award to the winner." Half the people never knew who won until Barbara Story of NOME finally yelled "I know her and I'll see that she gets it." Barbara then proceeded to ask the presenter to announce the award like it should be. When it came to Caren Parnes winning for Best Artist, they ran out of certificates. But my friends, the funny part to all of this is - NO AWARD for best Trek zine won over zines like. Mainly Trek, Mind Meld, and Nome. Come on! - I just can't believe that. Now I know its only hearsay, but the announcer was heard to comment "What do you expect when you have four pieces of drek" - of course, no award would win. There's more to tell. Neither Joey Shoji or Flora Post won for best Trek filkers - I find that very hard to believe. Joey is a very close personal friend of mine and I know that a large number of people have heard his filks along with other songs that he has written. You mean to tell me that no award is a best choice for these two Trekkers.

I'm sorry - I really wanted to like this con. I had heard so much about it and was thinking of going each year. I can't in all honesty support a con whose attitude towards Trek is such that it shows it doesn't care. If you were a new fan into Trek you sure wouldn't have a good time there unless you knew some of the Trekkers. If you didn't know one of the people in the know you'd feel left out. Not a nice way to treat other fellow fans. When it comes to a good convention my vote goes for SHORE LEAVE every time. No matter what you're into - be it K/S or whatever - YOU are always welcome! After all, Trekkers are the nicest people around. I know myself that if I meet a new fan for the first time I really try to make that person feel a part of the whole scene. [3]