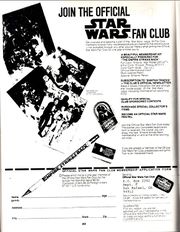 The Official Star Wars Fan Club was for profit and not run by fans. 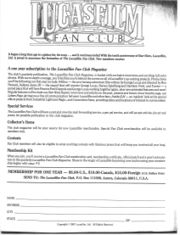 It was the originator of the Star Wars Letters.

This fan club appears to have much overlap with "Lucasfilm Fan Club."

It began a long time ago in a galaxy far, far away... and it continues today! With the tenth anniversary of Star Wars, Lucasfilm, Ltd. is proud to announce the formation of The Lucasfilm Fan Club. New members receive:

A one year subscription to the Lucasfilm Fan Club Magazine

The club's quarterly publication, The Lucasfilm Fan Club Magazine, is loaded with exclusive interviews and exciting full-color photos. With our in-depth coverage, you'll feel like you're behind the scenes on all of Lucasfilm's up-coming projects. Productions you'll be following our first year include: Willow —the new fantasy-adventure film written by George Lucas and directed by Ron Howard, Indiana Jones III— the sequel that will reunite George Lucas, Steven Spielberg and Harrison Ford, and Tucker —& period piece that will have Francis Ford Coppola and George Lucas working together again, plus new animated features and more! Regular features will include our Star Wars Report, interviews and articles on the past, present and future of our favorite saga, our Letters Page, giving you a line of communication between Lucasfdm and other fans, Inside ILM— an insiders' look at the special effects projects from Industrial Light and Magic, and Convention News, providing dates and locations ofinterest toour members.

The Lucasfilm Fan Club will have a cast and crew fan mail forwarding service, a pen pal service, and will accept articles, fan art and poetry for possible publication in the club magazine.

The club magazine will be your source for new Lucasfilm merchandise. Special Fan Club merchandise will be available to members only.

Fan Club members will also be eligible to enter exciting contests with fabulous prizes that will keep you involved all year long. Membership Kit

Some Direct or Indirect Publications

A fan in 1997 expressed his displeasure about this club, citing over-priced goods, a catalog posing as a zine, poor customer service, and its general failure as a service to Star Wars fandom. See Sarlaac Pit: The Reason Sorry Products Were Made.

In 2003, a fan who lived in the UK wrote: "When will they start putting in articles and features, which are actually about things that happen in the UK? And what about some original letters as well please instead of copies from Star Wars Insider! It really is a dark time for Star Wars fandom in the UK." [1]