Craig Miller was the Star Wars "fan liaison between 1977-80. His work for Lucasfilm during that time included creating fan "buzz" for the franchise. [1]

Around August 1980, he was replaced by Ira Friedman (perhaps in a minor role!), and then Maureen Garrett (in a very major role).

Miller created and and was the director of the Official Star Wars Fan Club.

He was the producer (and the writer of most) of the first two years of Bantha Tracks.

Miller was also responsible for creating the 800-number telephone hotline for The Empire Strikes Back that allowed fans to call up to receive more information about the movies and characters. This "accidentally shut down the state of Illinois’ phone system." [2]

He is the author of the for-profit book "Star Wars Memories: My Time In The (Death Star) Trenches."

His Part in Early Fan Relations 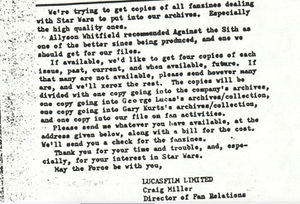 letter by Craig Miller, published in Against the Sith #3 (January 1979)

The zineAgainst the Sith #3 (January 1979) had a letter from Miller. It is an early attempt to control and monitor fan activities:

"We're trying to get copies of all fanzines dealing with Star Wars to put into our archives. Especially the high quality ones.

Allyson Whitfield recommended Against the Sith as one of the better zines being produced, and one we should get for our files.

Please send me whatever you have available, at the address given below, along with a bill for the cost. We'll send you a check for the fanzines.

Thank you for your time and trouble, and, especially, for your interest in Star Wars.

May the Force be with you,

For more about this see, Open Letters to Star Wars Zine Publishers (1981).