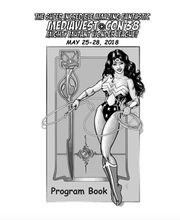 program book cover (unknown if original was in color)
From the program book:

It's hard to believe we've been doing this for 40 years (starting with T'Con in 1978). MediaWest*Con's focus has shifted and expanded over the years as we try to welcome new interests while retaining an emphasis on media science fiction and fantasy fandom, and we believe this makes us unique among conventions. Our basic format -- lots of panels on topics suggested by members and no official guests -- is what makes MW*C special to those who look forward to it every year, but it is limiting at the same time. Our intended audience is active fen, those who read and write fanfic, publish fanzines, make fannish videos, create fan art, do costuming, etc., or would like to.

Unfortunately, membership has been slowly declining for years, despite our efforts at promoting the con with limited resources. And as membership declines, costs of putting on the con continue to rise.

Lori will be available throughout the con at registration to listen to your ideas how to reverse the decline in membership and revitalize MW*C. There will also be a panel Sunday 11am in Delta Central and, of course, the traditional end-of-con Dead Dog panel Monday 11am in Regency C-D.

Thanks to everyone who answered the call to help try to increase membership to a sustainable level. Unfortunately, there has not been a significant uptick in memberships since then. Therefore, we have no choice but to postpone MediaWest*Con 38 until next year.

We hope people will understand that this is not an easy decision for us, and that it does NOT mean MW*C is dead. Rather, it gives us time to consider what changes may be necessary for MW*C to continue into the future (i.e. location, date, etc.). We are also looking into the possibility of some form of virtual MW*C somewhere online.

Apologies to those who have already made travel plans, etc.. We understand that this may be a major inconvenience for many, but we had little control over the timing as a decision had to be made by the hotel deadline to cancel without incurring very large monetary penalties, which left us with a very narrow window. We have tried to be as transparent as possible that there was an issue so that members were aware that it might be necessary to postpone MW*C 38. It has also been a particularly bad year for staff members, and we lost several due to health, family, and financial issues. Thanks to all those who stepped in to help.

Existing memberships will continue to be valid. Those who are unwilling to wait may request refunds (as usual, you can convert to Supporting and continue to receive Progress Reports, etc., or you can request a full refund). The same goes for Dealers tables. Not requesting a refund now does not mean you can’t request a refund later.

The Fan Quality Awards will continue taking nominations, and voting will be conducted as usual online and by mail, with the final results posted on the MW*C website.

As always, we encourage members to subscribe to the MW*C blog to keep up with the latest updates and announcements. We will continue to maintain the MW*C blog and website as your primary sources of information.

Co-Chairs (& your hosts) Lori Chapek-Carleton & Gordon Carleton would like to thank the following staffers and their assistants for all their hard work: Carol Lynn (Hotel Liaison), Scott Clark (Programming/Party Suite/Flyers), Barb Gompf (GoFers/Con Suite), Kim Vanderlaan (Pre-con Dealers), Jim & Brenda Gasahl (At-con Dealers), Keith Grunenwald & Seth Cutts (Security), Karen Klinck & Art Show/Auction Staff & Auctioneers, Jan Keeler (Fan Q), Andre Lieven (Masquerade), Sheryl Adsit (Fannish Video), Kim Dyer (Door Decoration), Laura Keeler-Britt (‘Zine Reading Room/Fan Fund), Carl Tielking (Lansing Liaison), and all the GoFers and volunteers without whom there could be no convention. It has been a particularly bad year for staff members, and we lost several (at least temporarily) due to health, family, and financial issues. Thanks to all those who have stepped in to help! Thanks to Scott Rosema for the super superhero cover and interior art. MW*C 38 logos by Gordon Carleton. [2]

In 1982 the 'Zine Room began as simply the place to peruse fanzines in comfort and quiet -- well mostly quiet. Over the years, the Room found itself first becoming the caretaker of what became the MW*C Permanent Loan Collection which is the con's collection of fanzines (covering vintage and more current 'zines from almost 30 fandoms), then a display area for 'zines, new and otherwise that were being sold at the con was added. For about the last 15 years, the 'Zine Room has been the site of the SF/Media Fan Fund charity auction which has expanded greatly from its beginnings. The ‘Zine Room was Jan Gosnell’s pride & joy and we are glad it is continuing! 'Zine Room is in the Waverly Room, near the lobby elevators. [3]

The SF/Media Fan Fund helps send a fan to a convention he/she would otherwise be unable to attend. As there were no nominations received this year there is no ballot. AUCTION: Many thanks to all those who donated items! The 2018 SF/Media Fan Fund Charity Auction will be held in the Fanzine Reading Room, located in the Waverly Room. In the past it has been jokingly called "the Fannish Yard Sale" and usually has a wide assortment of fannish goods. It can include artwork, fanzines, new T-shirts, tote-bags, books, jewelry, music CDs/cassettes, videos (both VHS and DVDs), and lots of media collectibles. What is offered each year depends on our wonderful donors. New items can be added until 6pm Saturday, so check in occasionally so you don't miss anything. The auction is silent bid style, see postings for hours. The last bid on the item at that time will be the winner. However, this auction also does "Quick Sale Price" which is higher than the minimum bid but means you can take your item with you immediately. When the auction ends, the room will be closed briefly to set up for immediate pick-up. ALL items sold must be picked up by 3pm on Monday. [4]

The SF/Media Fan Fund helps send a fan to a convention he/she would otherwise be unable to attend. All entries must be in VHS or DVD format. The entry should be the only material on the cassette/disk and should begin within a few seconds of starting the tape/disk. Mature, Gen, and Slash videos must be on separate cassettes/disks. Slash includes same-sex relationships (Queer As Folk, Will & Grace, Oz, etc.). Videos that more than hint about a physical relationship (Slash or Gen) should be labeled Mature.

Producers should send Sheryl the list of videos (in the order they appear on the tapes/disks) and specify Song/Title, Fandom/Multi-Fandom, Category, Mature, Gen, or Slash, and total running time of tape/disk. Please include producer names and contact info. If an entry has not been completed prior to that time, producers must be ready to provide the following information for each individual video: Song/Title, Fandom/Multi-Fandom, Category, Gen or Slash, if Mature (adult) content, and total running time of tape. Slash and Mature videos should be on separate tapes/disks from Gen (general audience) videos. Tape/disk entry info deadline is 11pm Thursday. All tapes and disks must be in the hands of the video competition organizer by 5 pm, Friday. Failure to follow entry rules may result in disqualification of all videos by that producer or group. There will be Gen, Mature, and Slash divisions for the categories below. There will be no award in categories in which there are no competing entries. Slash and Mature videos will be shown in separate groups, both groups will be shown after 9pm. The Mature rating includes videos of all orientations that are of an adult nature. This would include such "steamy" examples as the Bunnies from Hell "Addicted to Love" Wiseguy video of a dozen years ago (it certainly raised the ambient room temperature back in the old Waverly Room...). Also included would be songs with questionable lyrics, such as "Big Balls" from KOBA-TV -- which was ostensibly about large spheres, but was clearly intended to be a double entendre RE, ahem, manly endowment. These Mature tapes/disks should be placed on a separate tape/disk, for showing in a separate session after 9pm. The time limit per entry remains 15 minutes per producer, Mature, Slash, and Gen videos combined. Slash and Mature vids will be shown in separate groups, but both groups will be shown after 9pm. This will allow those who do not want to see Slash to leave after Mature vids are played. If a producer has any question about the rating of a particular video, there will be a screening session Thursday evening in the Fannish Video HQ (my room). It will be open to all producers who want to talk about video topics (not just ratings); this is the place to see if that "artsy" video really says what you want it to. [6]

We are hoping to have a couple blasts from the past – slideshows The Capture (1976 Hugo nominee written by Bob Asprin and illustrated by Phil Foglio) and Supraman: The Movie Parody by Gordon Carleton. Let us know if you are interested in voice parts! See Paula Smith for The Capture or Gordon for Supraman. [7]

Additional convention reports are needed, especially one by members attending the event in 2018.

This past Memorial Day weekend was the traditional time to attend Media West*Con in Lansing, Michigan. I was once a faithful attendee and still miss it, but a lot of factors combined to make 2011 my last con.... ..So why did I stop going after my last trip in 2011? A lot of reasons, which probably applied to other people, too. Fandom's getting older and poorer. The economy might be great for the 1%, but the rest of us have to struggle. And dealing with the airlines? Every year it got more aggravating, not to mention less flights available at good times getting in and out of Lansing. .......Finances and dealing with the airlines did me in, exhaustion with the room lottery, and sadness over the con's lack of energy. [8]