Some Facts About the 2006 Convention 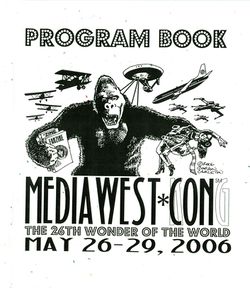 There were two plays that year: "Bye Bye, Jedi," a musical by Mark Kobrak & Bev Grant, and "The Bi-Lite Zone," a slash-themed play by Paula Smith.

Due to a lack of nominations, there was no 2006 SF/Media Fan Fund recipient.

Other: "The Celtic Tunnel Party Strikes Again! - to be held Fri. night at 8 pm 'til ? in the Celtic Rose Perfumery Room, number to be posted at the con. Featuring varieties of Canadian chocolate amongst other things. Ladies Sewing Circle and Terrorist Society annual shopping trip will once again be heading to Kean's in Mason and Everlasting Stitches in Holt. Interested parties are to meet at the Security Desk on Saturday at 1pm. Ryan Effner Memorial Nuclear Beach Party will be held Friday at 11pm to lam in the Con Suite. Glow in the dark items welcomed."

A complete list of winners, with photos can be seen here.[2]

A complete list of winners, with photos can be seen here.[3] A few sample doors are included below. In 2006, Irene Heron's Han/Luke door display was destroyed by unknown persons.[4]

For a complete list of vids submitted go here. Winners are listed below.

"he vid show started at 7:00. Ginger showed a reel of last year's winners, which was nice. We got to see the screamingly funny "Holding Out for a Hero" by master_chatnoir again, since it won first place, humor, last year. We also got to *ahem* relive the Jar-Jar/Golum love. Oy, the crack.

Then as we were getting ready to start this year's stuff Cheryl (who's in charge of the vid show) started talking about people who have been helping her out. So I'm sitting there, reasonably sure for the most part that she's talking about Ginger... but she was actually talking about *me* and I got named "Associate Vid Show Producer in charge of the Slash Show." Squee. That was nice. It doesn't really mean anything, but it was nice.

The show was *short* Three hours all told. We've had years where we swear the Cali Crew *reel* was three hours. There were 9 gen producers and 6 slash producers. OUr stuff seemed to have gone over well. People seemed to get a kick out of "Right Now" if they could see the text... but not all of them could. "Basket Case" went over pretty well too. Our credits amused people. We were the only ones (I think) with actual lead in credits. That was odd."[6]

Thanks to Alem for taking over the Dooer Decoration Competition.

Thanks to the producers of Frankenstein vs. the Creature from Blood Cove (available on Amazon.com). Thanks also to Jeff Walker for the movie trailers and studio promotion freebies.

"The annual con held in Lansing, Michigan on Memorial Day weekend was as enjoyable as ever, although the weather was hot as Houston. The abundance of panel tracts, the great art show, the smaller than usual but wonderful vid contest, and the gatherings with fellow fen friends from all over the country are the best parts of this con. I attended a few Sentinel panels and envied the skill of the vidders. I wish I knew how they found all the wonderful songs they used in their songvids. Based on the new zines and artwork, the hot new fandom is Supernatural. This con and Revelcon make spring and summer a fun time of year.

"This year [E] and I slugged out and didn’t sign up for any panels. I’m not into any hot new fandoms, so I went to panels on old faves like LOTR and RGP, plus a few on the perennial unresolved fannish topics: [E] saw a number of younger fans in the hall blaster battles and the anime panels. Some were the children of MWC vets but others were probably newbies. Yay! We also talked to a lot of dealers—[E] hopes to convince more dealers to send new zines to the 2007 Revelcon. I... actually bought two pieces of art this year: a LOTR photomanip of Boromir and Faramir and an art print of a chickadee. It seems to me that there were fewer X-rated pictures in the art show this year—not none, but less. At the auction, Paula Smith, the auctioneer, called for applause for people’s faves and demonstrated that more femmefans are interested in cats than in any given hot guy."