Some Facts About the 2008 Convention 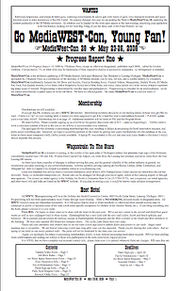 A fan wrote: "Participation was abysmal and, from writers I got to speak to, a good reason why many fics never see a printer's shop any more. Sad enough some feel neglected because of lack of feedback, but FanQ (which could have come across for them as feedback even as a nomination) has widdle down to barely a few dozen. I remember when I first attended FanQ (7 years ago only), it was standing room only. Now? :( Can fanzines be registered as an endangered species? LOL" [2]

One play was submitted: MediaWest*Con in 15 Minutes, from Julie Barner and Ashley Harp.

the 2008 party suite programming, from the progress report

There was a Hobbit Tea Party and a "Sing Along with Buffy" (Buffy the Vampire Slayer) party.

A complete list of winners, with photos can be seen here.[3]

A complete list of winners, with photos can be seen here.[4] A few sample doors are included below.

There are many, many door decoration photos here.

The art show winners are selected by popular vote.

Winners are highlighted in bold. GEN VIDS IN COMPETITION

Ginger, of Stampede Productions, also had a “No Cell Phones, Please” new video on the 2007 Winning Videos recap disc, which should be considered to be eligible as a “new” video for this year

"I wandered down to the video room around ten o’clock, figuring the gen vids would be running, when I was surprised to learn that the slash vids would be starting! Usually they are shown at midnight, but this year there were fewer new gen/het/slash vids, and not as many from the past. There were actually times when the vid room wasn’t showing anything, the first time that’s ever happened.

The slash vids were very well done. They featured The Professionals, Tara and Willow from Buffy, The Vampire Slayer (the song was The Lovin’ Spoonful’s“Do You Believe In Magic?”), Supernatural, Starsky & Hutch, and The Sentinel.

I liked getting to see the ending of Supernatural, and always love seeing Starsky & Hutch. For a popular fandom, I haven’t seen many videos of the guys over the years at the con. It was extremely well-done, and how could you not figure these guys were gay with all the touching and love?  ;)

A word about The Sentinel: it was outstanding, as manipped images of the boys making love were interspersed with scenes from the show. Definitely needed to keep the door closed for this one!  ;)" [6]

"We all saw a repeat of the slash vids (new to them), and earlier in the day I had seen a cool Lois & Clark vid set to a song about Superman (‘One billion children wish you well, Superman’). Usually slash vids premiere on Friday night around midnight, but this year were earlier due to less vids. Repeats generally take place on Saturday and Sunday nights at nine o’clock."[7]

From the first progress report: