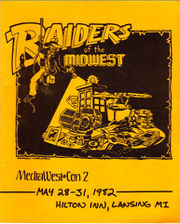 Some Facts About the 1982 Convention 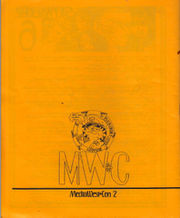 People having more or less private showings of videotapes in their rooms are encouraged to list times and programs in the con suite if they're willing to allow members at large to look them up. Who knows? You might convert a new fan to your interest!

The con plays were "Hilton Street Blues," and "Gumbies of the Lost Ark."

Some panels: "Darkover Easey," "Hill Street Blues," "What Makes Nasty Tasty: Villains," "ST: The Wrath of Khan, Must Spock Die?", "SW--Son of Revenge Strikes Back," Chemistry of a Fandom," "Courtesy in LoCs," "Doctor Who Role Players," Medical Forensics," "Mundane Rights and Legalities," "Mixing Fandoms: Is One Enough? Are Eight Too Many?" and "British SF"

As good fortune would have it, this year I had the opportunity to make it to a convention of which

I had only heard legends -- MediaWest. Run chiefly by Lori Chapek-Carleton, Gordon Carleton and Paula Smith, this convention enjoys a truly exceptional reputation, and with just cause. I'd like to share my four-day adventure with you, with your permission. One small note here, before I begin. I travelled with a group from Pittsburgh (Trinette Kern, Jayne Clary, Dawna Snyder, Tim Thomas and Nancy Hillman). When I say "we, or the gang, I'm usually referring to one or all of this group.

Friday, May 28th -- Pre Dawn. Jayne and Trinette arrived at my house at 3:30 A. M., having left their own homes around three. We transferred Trinette's luggage and luggage rack to my car. Jayne and I had sent our suitcases with Nancy Hillman, who was driving up alone and had more space for luggage. Our next stop was to pick Tim up, since he only lives a couple of miles from the Turnpike entrance. We left the Turnpike once, to pick up Dawna (who arrived during the onset of a howling monsoon), and we were officially on our way to Michigan by five. After the first half-hour, the rain let up, and for the rest of the trip the weather was overcast, but dry. We left the Ohio Turnpike at Toledo at nine-thirty, and stopped for breakfast. While we were waiting for our meal, we occupied our time by doing a Mad Lib based on a scene between Kirk and Spock in "Amok Time." Mad Libs are stories with certain key words left out. These words are supplied by the players, who are unaware of the context until the final verb, adjective, adverb or noun has been filled in and the text is read. They can be devastatingly funny, especially if you know the original text well. After the final reading in the parking lot (we read it there to avoid being thrown out of the restaurant for disruptive behavior), we began the second leg of the trip. Only one wrong move which set us wandering aimlessly through Michigan for about half an hour. then we got our bearings and arrived at the hotel at two in the afternoon. After checking in (I had arranged to room with Ann instead of the Pittsburgh group) we checked out each other's room locations, then went to Registration. After registering we made our first wallet-draining tour of the dealers' room, where I finally caught up with Ann. After we talked for a while, I went wandering off to find some folks I wanted to meet. I had been writing to some of them for a while, but had never actually met them in person. During my tour of discovery, I ran into Martynn, who informed me that there would be a rehearsal of our Gumby skit in her room at five- thirty. Martynn is a fellow Pittsburgher and a marvellous artist. The Gumby skit, an unholy blend of Monty Python and Raiders of the Lost Ark, with a touch of Muppet Movie thrown in for flavor, was scripted by a mutual friend named Bernie Davenport. Bernie was playing Indy; Martynn, Marion; Karen River, Belloq; Elyse Dickenson, Toht; Nancy Hillman, Dietrich; Paula Smith. The Supreme Being; Pat Gonzales, intelligent person (the only one -- Gumbies aren't very bright) and prompter; Sheryl Adsit, Myth (yeth?); and I was playing Sallah.

After talking for a while with Martynn, I checked to see if my suitcase had arrived. It hadn't, which meant no fresh clothes and no deodorant. I spent the entire rehearsal praying someone wouldn't ask Martynn and Elyse where they had hidden the goat. After rehearsal we went out to dinner at the local Denny's. When we returned to the hotel, we found that our things had finally arrived, and after making plans to meet for an early breakfast the group split up and I headed for a shower and BED.

I woke once through the night, just long enough to register the fact that there was another body in the bed and it seemed to have some deformity around the head, then I went back to sleep.

Saturday, May 29th: My alarm went off at 7:30 A.M. endearing me to my room-mates for life. (honest, gang, I thought I could get to it before it woke everybody.) The lump in the bed turned out to be Ann who was wearing either earphones or earmuffs. Since the Imperial Security team was getting into uniform and looked especially mean, I decided to postpone asking why Ann felt it necessary to wear earmuffs to bed in May. I went downstairs and met my Pittsburgh gang, plus Pat Gonzales (Gonzo) and two friends of Dawna's, and we headed back to Denny's for breakfast. Jayne entertained us by suggesting that the next convention could be called "The Wrath of Con," and therefore, filksinging at mid-day at that convention could be called a "Con Noonian Sing." We buried Jayne in Denny's flower bed.

Back to the con then, and I retired to the room to assume my Klingon persona for a panel on which Ann and I were to appear, called "What Makes A Tasty Nasty?" Our fellow panelists were Carol Hines-Stroede and David Manship. Ann and I were both a bit nervous, since it was our first participation on a panel, but David Manship (of the KDC and the Dorsai, both con security groups) did a nice job of moderating and kept the discussion going smoothly. When the panel was over, I had lunch and made for the dealers I room once again. There, I was impressed by a lovely purple dragon with blue eyes. My next stop was Annis SF and Fantasy Dungeon, where my character survived and came out very wealthy. Much fun. After the D&D game, I retired to the room to prepare as much of my costume for "Gumbies" as possible, then went down to the dinner banquet. My ticket was taken by Security Chief Ann and her group of Imperial Nasties. After seeing that group I was sure no unauthorized person would dare try to crash the banquet. Once I had eaten, I'm afraid I missed the presentation of the Fan Q Awards because I had left for the Ladies' Room to have my scheduled nervous breakdown and to don the rest of my costume. When I got back they were showing the trailers for Blade Runner and The Wrath of Khan, plus two wonderful animated shorts named "Animato" and "Wizard of Speed and Time" which had been done by Mike Jittlov. Then Gordon Carleton's "Hilton Street Blues" was presented. Very funny and extremely well done.

Next came "Gumbies of the Lost Ark" which seemed to be fairly well received. After "Gumbies" I went back to the room to shower and change. I went back downstairs to catch a little of the Costume Competition, then tracked down my friends. We talked in their room for a while, then went to the lobby, where we met a gang who were bound for Denny's and joined them. You really know you're at a con when you enter a restaurant and find yourself surrounded by several Corellians, a princess, a Dragonrider or two, a winged creature, and several "apocryphal personae" such as dragons, Hokas and one stuffed monkey named "Snuff." Then it was back to the hotel for some more talk, and finally, at two-thirty, bed.

Sunday, May 30th: This morning I slept in until the sybaritic hour of 9:30. A leisurely shower and donning of attire, and then I wandered downstairs to see what was happening. Dropped by the Warped Space table to lay it and my wallet waste at the same time, chatted with Lori and received my copy of the Hilton Street Blues script. Dropped by my friends' room to see what Jayne was doing then retired to the lobby to leaf through a couple of 'zines. As I was snickering my way through "Hilton Street Blues" I heard an announcement that voices were needed for Gordon Carleton's slide shows, Supraman and City on the Edge of Whatever," and that tryouts were being held in the con suite. Having survived the previous night's stage experience, I decided to tryout (a Ham is Born). I got two roles in Supraman, and a minor one in City. After reading through each script once, we broke for the Lunch Banquet. Directly after lunch we were treated to a filksong called "The Battle of MediaWest*Con," which dealt with the happenings of the previous year's con when a bunch of drunken softball players had some unfortunate dealings with costumed conventioneers. After the banquet was over, I took off for the slide show. Gordon's slides and scripts were marvellous, and it was fun to hear what the other people were doing with their roles. Gordon did a creditable Marlon Brando and Elmer Fudd (for Lex Luthor's voice), and the man playing the elder Kent did a great Jimmy Stewart imitation. After the slide show it was back to the room for a quick change into my modified Corellian costume, because I was due to attend the Rebel Alliance Diplomatic Reception. Pretty good turn-out, even though there were a few (and I must say, well- behaved) Imperials present. Finally got a chance to see Mark Hyde's beautiful Wookie costume when Chewie made his appearance at the reception.

When the reception was over, the gang piled into our car and we drove off In Search of...Pizza! After dinner we met for "Star Wrecked: The Commotion Picture," which is a carefully edited tape which turns the first Trek movie into a musical, of sorts. Very cleverly done. When the movie ended, Trinette and Dawna went off to find some other friends and Jayne and I headed for Martynn's room to catch up on the latest gossip about the next Star Wars movie. While we were talking, a group which had gone to a nearby theatre for a preview showing of E.T. returned and gave a glowing report. After doing a couple more Mad Libs and looking through Elyse's Harrison Ford photographic collection our group split up for our respective beds.

Monday, May 31st: Wake up in acute depression, knowing it's soon going to be all over. Started gathering things together for packing, then left for Breakfast Banquet. After banqueting we attended "The Sound of Jaws." Good singing and good scripting. Back to the room for packing and check-out. Then the car was loaded, a final sweep made through, the dealers' room, good-byes to friends, and back home to Pittsburgh. Sigh...

My final comment is a compliment to the Media- West co-chairs. By encouraging member participation they've evo1ved a we11-rounded convent;on where no member needs to feel alienated. There is a strong feeling of belonging at this con, and I know that only a great deal of hard work and consideration for others on the part of the Con Committee made this possible. [4]