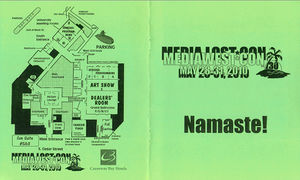 covers of the 2010 program book

Some Facts About the 2010 Convention

There appears to have been no skits.

This year the nominees were Susan Graham and Sue Zahn. The recipient of the 2010 Fan Fund was Susan Graham.

"Are you on the path of the Light? Or does the Darkness whisper to you. Come explore path that calls to you, Forces of the Empire want you! FoE is an role playing club. We do Live Action at MediaWest*Con, and online the rest of the year.You can find Forces of the Empire in the Imperial Suite near the Dealers Room. Friday night is our music night of dance and Roleplaying. Come join the fun even if for just the weekend."

A few sample doors are included below.

From the program book, some standard rules: "NO PETS in the Art Show please. DO NOT TOUCH the art. Don't handle it, take it down or pick it up. Be extra careful with costumes or props; costumes can swirl and knock over art & fragile items. You break it, you buy it. Also be careful just backing up; you can back into someone, or lose your balance and fall on art."

From the program book: "Parents/Guardians: We do not censor adult themes in the Art Show & Auction. Members with children may wish to preview the Art Show to determine if they wish to restrict their charges' entry to the Art Show or Auction."

There were not enough vids submitted to the vid show for there to be awards that year.

Slash vid show: Fandoms featured were The Professionals, Starsky & Hutch (Starsky's Song by kat-byrd, to the tune of Annie's Song by John Denver), Donald Strachey Mysteries, Stargate: Atlantis, and Master And Commander. Mixed vids included Due South, Farscape, The Phantom Menace, and even a clip of Johnny and Roy from Emergency.[5]

CHEWING GUM FOR THE EYES:

SLASH or MATURE VIDS IN COMPETITION- ---

CHEWING GUM FOR THE EYES:

Production quality, across the board, was uniformly high this year. Only a few vids had that pixelation problem that is common to digital vids done with low-quality software. There weren't any truly "bad" vids at all this year, and there were actually some that were quite impressive, both Gen and Slash. I'm not a Slash fan at all, and am still quite satisfied that the Gen and Slash are in separate showings at this convention. However, as a video artist, I still watch the Slash vids to appreciate their technical artistry. My favorites, on first viewing tonight, were Infinite Fandom Productions' Star Trek 2009 movie vid that had no onscreen credits (and which featured a loud alt rock song I didn't recognize) and "Hip to Be Square" (focusing on the Nerd Herd from Chuck); "All Soul's Night" (a Merlin vid) and "The Monster Squad Rap" (Supernatural) from Spaced Ponies; "The Little Things" (Supernatural) from Chewing Gum for the Eyes; and my own tribute vid, set to two songs...Jamie Cullem singing "What a Difference a Day Makes" and Johnny Cash singing "In My Life". On the Slash front, all four of Chewing Gum for the Eyes' vids were impressive. I'm relieved to see the output climb almost 200% over last year's limited vid contributions (32 combined Gen and Slash this year in comparison to a combined total of 11 last year). I still miss some of the vidding stalwarts, many of whom may never come back to MWC -- California Crew, Yellow Brick Road, Steele Inc. Atlanta, Con Dog, Barbara's Living Room Productions, Apocalypse West, RC Productions, Chevron & Jon, Vid Weasels, etc. However, it was nice to see some really good vids from new producers. [7]

Unless noted, all panels were gen.

A copy of the final panel grid can be found here.

Beadwork - Basics and Beyond: Presented by J. Kraft and J. DeVorc (2 hrs) Holy Mother Granimatica's Pet Peeves and... What drives you crazy in the written word: fiction, fan or pro; non-fiction; scripts, et cetera? Tips and Tricks for Better Fanfic: Suggestions on how the little things can make your fiction better. (1 hr)

"MediaWestCon: not enough sleep, too much eating, a lot of laughter (the right amount), & too few men. So much estrogen is a little scary......There were very few people under 40 at the convention. Like many other conventions, the MediaWestCon organizers are having problems attracting new, young members. To attract young people and men, there need to be role-playing games, computer games, anime and an emphasis on costuming. There need to be activities other than just sitting in panel rooms talking. Conventions such as MediaWestCon need to come into the 21st century if they want to thrive. While I had a nice time at MediaWestCon, I would not go again unless the same circumstances presented themselves."[8]

"Although it felt good to reminisce, I also thought of the darker side; teens today will never have the same experience I did at fan-cons, because they are dying out....Why are these conventions all failing, but the big pro-run shows are doing well? There was a panel at MediaWest Con (another one dying) on this topic, and most fans seem to think this is because there is no new blood coming in, and what does come in is only interested in Cosplay, very little of which you see at the fan cons. The young ones see little value to paying an admission fee and sit around and talk with other fans when they can do this for free on the internet. As someone who spent a good part of his youth at cons (Star Trek and Creation when I was a teen, Regional Cons and the WorldCon in college (Road-Trip, anyone???), International Cons in Grad School (the first time), San Diego Comic-Con, DragonCon, EMC Con, and most recently, MediaWest Con, I really do not understand this attitude. I wonder, too, if there is still a place for fan-run cons? Can one survive in this economic and social climate? I certainly hope so…"[9]

Wrap-Up Thoughts On The Con

The con once again was downsized due to the aging of the fandom that makes up its members, and the economy. It’s been that way for the last three years. We’ll see if the old energy comes back, but if it doesn’t, I’ve decided I wouldn’t want a reinvention. I don’t care about attracting younger and newer fen. I don’t give two hoots about gaming or any of their other interests, and have been to actor cons before. They’re fine, but it’s really nice to go to a con that doesn’t have to cater to actors’ egos. Also, mega-cons are fun in their way, but I like the more intimate setting here. So if it dies out, so what? It had a good run.

I do remember the old energy and miss it, but at least I had the good fortune to attend for several years when Media West was a destination for Fandom Central. My first con was pre-Net, and the second was when the Internet began to be available to everyone, but not all of us had access or even knowledge of how to use it. For years MW managed to co-exist with the Internet, the zines still plentiful in the Dealers’ Room and hall dealers’ rooms, and the vids were numerous and the Art Show bursting with creativity, taking the Art Auction four hours or more to get through all the pieces for bid (now it takes only two), but you still get the chance to talk to people in panels and informally. If that isn’t flashy enough for newer fen, then so be it. Nothing will ever replace my memory of attending my first Media West and feeling, Yes! This is the place where I belong! These are my people! ;)

See you all next year! Same Bat-time, same Bat-channel! ;) [See more at the original post][10]