Some Facts About the 2011 Convention 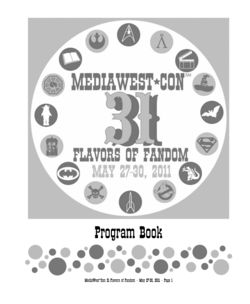 cover of the 2011 online program book

Some plans, from a progress report:

"Gordon has been inspired to write a parody of Star Trek 11 (i.e. reboot) with music from Grease! Volunteers are still needed for roles, as well as musical accompaniment and stage ninjas. Contact Gordon. As it is a musical, most parts involve singing, though some more than others. We need a CHORUS of at least 3 people, who appear as various characters at various times (Vulcans, Cadets, Romulans, etc.) and back up the other cast members. Cast: Roberto Orci, JJ Abrams, Alex Kurtzman, Jimmy Kirk, Spock (his younger self), Nero, Spock 1 (his older self), Cadet Uhura, Capt. Christopher Pike, Cadet McCoy, Cadet Sulu, Scotty. Assistance with costuming is also welcomed. So if you can lend such things or can make such things quickly and cheaply, we want to hear from you! Be there or be square!"

It appears this skit was not presented.

A complete list of winners, with photos can be seen 2011 here.[2] A few sample doors are included below.

In his 2011 convention report canellfan describes the entries for the year:

Producers were not required to identify what category their videos were being submitted in. The standard MediaWest*Con categories are: Song Interpretation - Single Source; Song Interpretation - Multi-Source, Humorous, Original (made mainly from home-made footage), Constructed Reality (in which a story is told with the footage, which was never there in the original context of the footage). There were no "Original" or "Constructed Reality" vids in this year's show."[4]

Regarding the awards for that year, also from canellfan:

A fan, bradygirl, commented about the vid show:

"..... we sat together at the videos, which was experiencing technical difficulties. They were resolved and we saw some good stuff. In the multi-fandom vid the shot of Clark getting ready for the prom and Lex fixing his tie was used. Aww! Also one shot of Steve and Danny from Hawaii Five-0. I was surprised we saw no vids featuring this hot new couple. Ah, well. My favorite fandoms rarely get vids, but there are endless Supernaturals, The Professionals, and The Sentinel, all good shows that I don’t watch. ;) You haven’t lived until you’ve watched a vid and a whole roomful of slash fans sing along to The Partridge Family’sI Think I Love You! ;)"[6]

In 2015, one attendee wrote up her 2011 convention report. It is reposted here with permission.

"I went to MWC a few years ago. I wanted to make it one of my regulars, but I had the usual string of things right after that......At the time, I didn't drive, so the location meant a prohibitively expensive plane flight for me and then the need to bum rides off of strangers. Combine the 3x transportation cost compared to other cons I go to with the room lottery, and it was a very tough sell. It took me a few years to make it there, and I will never be able to convince local friends to go with me.

On the up side, the year I went I showed like 45 minutes of my vids because the vid contest had gotten so small, and the ability to bore... err...entertain a captive audience like that was very attractive and would be worth another trip if I could make it again. OTOH, I did find it a little daunting to have to figure out to ask the front desk to call the vid coordinator's room so I could ask her her room number and turn in my physical DVD. (As a side note, that was the first DVD I'd ever burned, and I had to buy an external drive to do so. I completely understand the technical limitations afflicting the con, but I think this would be a somewhat significant hurdle for other younger/newer vidders too.) The lack of signage meant that some people missed that there were vids at all. On Sunday, somebody wandered in, sad that she'd missed them, so I tried to show her the DVDs that were still around. (One group had already come to collect theirs.) We got SCREAMED at because it wasn't fair to show some videos more times than others because it's a contest. (Uncharitable assumptions and unwelcoming behavior were pretty much constant in my MWC experience.)

The door decoration thing is really cool. It was a big selling point for me. I just wish it were a thing at the other tiny cons I attend, but I don't think they have the numbers to talk a hotel into it. It sounds like the heydey of door decoration is long gone at MWC though.

The other really attractive thing to me was that MWC isn't specifically a slash con. I prefer cons that are focused on fan art/fanfic/vids/etc. but that aren't slash-specific. Unfortunately, the various slash cons or slash cons "+other stuff welcome too" cons fill my needs better than MWC did.

I've heard from a number of people that this was a big part of them not attending anymore. The way the vid contest rules are written up on the website is actively homophobic-sounding to me, and the separation of "slash" and "gen" vids is itself actively homophobic in the eyes of many vidders I've talked to. My personal problem with it isn't so much the homophobia as the problem that I heavily ship m/m/f threesomes these days, and they don't fit in any of the vid categories. For panels, I have the same problem: I have zero interest in a "gen" or a "slash" panel on Avengers (just to pick an example). While I'm sure plenty of panels veer off topic, I mostly avoided them the time I attended the con because I'd been warned that people can be cranky and unfriendly when you do so. (Whether or not this is true, it was the universal warning I received.)

When I had more money, MWC was worth it for me, especially from a history perspective, but it's hard to justify the huge transportation costs right now."[14]